This screenshot motivational poster is highly Pro-Sesshoumaru and Pro-Inuyasha with a few Pro-SessAya in the loved pairing sense, Pro-InuAya in the OTP sense, Pro-SessAyaInu in the OT3 sense, Pro-Shuran, Pro-Hakkaku, Pro-Ginta, and Pro-Shunran moments sprinkled in between for the sake of explaining why I believe Ayame, Shuran, Hakkaku, Ginta, and Shunran would be the greatest friends, allies, and family members Sesshoumaru and Inuyasha can ever have in their lives. Sit back, relax, and delve into my total admiration for Sesshoumaru and Inuyasha as well as my firm belief that these two powerful dog yokai warrior brothers are in need of genuine, unpretentious, healthy companionship rather than the one which is usually portrayed in the anime and manga, at least in my opinion.

Throughout my tenure growing up with Inuyasha ever since my initial viewing of this anime as an 11-year-old fifth-grader visiting family friends in Minneapolis alongside my maternal grandmother, the only characters who ever mattered, even as I am currently writing this as an adult, have always been Sesshoumaru and Inuyasha the two sons of Toga the Dog General. What was so striking about these two brothers were their immense physical, psychological, and mental strength, boundless determination, extremely visceral sibling rivalry, and veritable toughness. Nothing could ever stop these two warriors by any stretch of the imagination, despite some dire times. This even got to the point where I looked up to the both of them as my role models when I was in my tweens and teens because of those aforementioned qualities about their strength and determination taking centre stage. With repeated viewings of Inuyasha as well as my personal favourite Inuyasha movie, Swords of an Honourable Ruler, a new thought sprung forth from my mind, despite my readers thinking that what I am going to proclaim shall be deemed ludicrous. Despite Sesshoumaru and Inuyasha being powerful in their own special ways, what with Sesshoumaru’s brand of stealth, shade that he throws onto his enemies, and complete power and Inuyasha’s brute strength, peak physical endurance, and fantastic agility, they are still lonely souls who think they do not deserve any warmth or companionship, but their thoughts and they ways they word it say otherwise.

Sesshoumaru may be a mighty dog Daiyokai with sufficient nobility and style to make anybody from the gentry blush, great strength to make any warrior bow down to him, and a killer mindset enough to make any executioner give up their day job, thus handing it over to Sesshoumaru, but he is practically alone. It is true that Jaken is his most loyal yet absolutely mouthy and peevish servant, Rin is his ward who inevitably provided him with his first experience with saving one’s life through Tenseiga, and Ah-Un is his mode of transportation and domestic animal akin to a horse, but that does not erase the fact that he would rather fight his battles alone which he demonstrates very well. I contend that his coldness, distance, harshness, hatred to those who are not of a higher yokai class, and relying on strength as his only hope of survival are well-crafted masks to help Sesshoumaru cope with whatever insecurities he has of his own abilities, given how he used to covet the Tessaiga instead of the Tenseiga before coming into his own with the Bakusaiga, and his constant need to be the best just because he is a high-class Daiyokai. Other than that, the only healthy relationship Sesshoumaru has throughout the anime and the manga is with Rin who he revived after being mauled by Kouga’s wolves and who he ended up protecting from all harm. Nevertheless, Sesshoumaru does need friends who could keep him on his feet when necessary.

Inuyasha is physically potent, headstrong, and highly determined, but he is always undermined by both humans and yokai for his hanyou identity. Even Sesshoumaru despises him and finds it unfair that Inuyasha acquired the Tessaiga, although Kagome pulled it out and handed it to him as he implemented it to protect her from harm. Despite Inuyasha and Kagome traveling together throughout the anime and manga to gather the shards of the Shikon Jewel because she misaimed her arrow to the raven demon’s stomach, thus starting this whole hunt for the Shikon Jewel shard malarkey, there is still no trust between them, only animosity, frustration, and relationship patterns that screamed borderline failure one day and schizophrenia the next. Viewers and readers should not forget about the many occasions Kagome misused the Beads of Subjugation to keep Inuyasha as her pet under the guise of her trusting him when there was no trust to begin with. Miroku, Sango, and Shippou aka The Dunderhead Family are not any better in being Inuyasha’s friends because they do not truly understand him, although they did experience similar traumas of loss with the former two attributing this to Naraku’s machinations. Speaking of trauma and loss, Inuyasha’s loss of Kikyou ran really deep because she was his first love and thought he failed to protect her from harm when Naraku connived them into betraying each other. With Inuyasha’s fake friendship attributed to Kagome and The Dunderhead Family not understanding his depths and treating him like the butt monkey and his immeasurable pain of losing Kikyou before her revival through Urasue’s spells, Inuyasha is in desperate need of true friendship, genuinely unconditional love, and a much better life with people he trusts which, unfortunately, makes him have the shorter end of the stick when it comes to healthy relationships. He never deserved the farce performed by Kagome and the Dunderhead Family save for the genuine moments he has had with Kirara as his true friend.

This leaves Sesshoumaru and Inuyasha in each others’ company as brothers, despite their volatility towards each other, to finally realise just how alone they truly are. Where do they go from here? Who could ever help them be truly acknowledged for their strength? Who could reassure them that they are never alone in the slightest iota without any air of falsehood? Step forward Shuran, Hakkaku, and Ginta to be their best guy friends and brothers from other mothers, Ayame to serve as a catalyst for their fraternal unity while fancying Sesshoumaru but loving the absolute brains out of Inuyasha, and Shunran to be their little sister from another mother who can be the light of their family. Together, these seven yokai warriors would use their collective strength to combat the forces of darkness while sticking together as one tight family.

Shuran, Hakkaku, and Ginta would definitely provide Sesshoumaru and Inuyasha with sufficient encouragement, valour, and trust while believing in each others’ great capabilities, thus establishing a super sturdy friendship between these five gallant gentlemen. Shuran may be the big brute whose lightning bolt attacks can scar anybody from the inside and the outside, but his powerful size could serve as a beacon of protection towards Sesshoumaru and Inuyasha whenever they are struck down by their enemies. Hakkaku and Ginta may be a fun-loving, comedic, and energetic duo of wolf bros, but their loyalty towards Sesshoumaru and Inuyasha would never cease because of how truly strong and brave these two dog yokai warriors truly are, thus making them worthy of aspiration. Shuran would look up to Sesshoumaru because he would learn to realise that brute strength is never enough to conquer his enemies, and that demonstrating iron will and loads of concentration will aid Shuran to win a feasible victory. Hakkaku would learn from Sesshoumaru that he should never run away from his fears and tackle new challenges with loads of focus and perseverance to sharpen his will. Ginta would be inspired by Inuyasha to never let his weaknesses get the best of him, thus building a firm brotherly relationship with each other. Any way you slice it, Sesshoumaru’s brotherhood with Shuran and Hakkaku, Inuyasha’s brotherhood with Ginta, and these five gentlemen’s collective brotherhood make for a long-lasting relationship rife with trust and flexibility.

Ayame is never going to tackle Sesshoumaru’s and Inuyasha’s visceral sibling rivalry sitting down. In fact, she would take action and ensure that neither brother attempts to kill each other for otherwise stupid and petty means by demonstrating her physical strength, unwavering will, and sheer determination, thus earning her their boundless respect and vice-versa. These would be the aspects Ayame has in common with Sesshoumaru and Inuyasha in order to build a hopefully more harmonious environment between her and the brothers. No, she would be so brazen to threaten them nor call them idiots because that is not her style. She would instead remind them that, at the end of the day, despite their differences, Sesshoumaru and Inuyasha are still brothers through and through. Her effect on Sesshoumaru and Inuyasha would also pass down to their children Dai, Roku, Kai, Rin, Shiori, and Shinta as a beacon of family unity. Speaking of dynamics between her and the two brothers, she would love both of them just the same because of how valiant, powerful, and determined they really are to the point where Sesshoumaru would admire Ayame for her courage and Inuyasha would love Ayame for her compassion and warmth. However, Sesshoumaru would be blunt and state that his relationship with Ayame is nice, but it does not offer them sufficient space for them to truly grow together. At least, with Inuyasha and Ayame together as a couple, this would provide Sesshoumaru room to encourage them to stay by each others’ sides without ulterior motives. When it comes to solidifying Sesshoumaru’s and Inuyasha’s relationship as brothers to the end they have Ayame’s strength, courage, valour, and stamina to thank.

Shunran as Sesshoumaru’s and Inuyasha’s little sister from another mother would serve to remind them that there is more to their lives than the quest for sheer strength and power. Her inquisitiveness might seem annoying to the brothers at first, but, with time, they would tolerate her and learn to appreciate her a lot more. Much like Ayame, she would even demonstrate that she is no damsel in distress, but a crafty tactician who knows her way around every single situation she is. Therefore, she would gain both Sesshoumaru’s and Inuyasha’s respect thanks to her craftiness as well as her warmth.

Sesshoumaru and Inuyasha do deserve the best family, friendship, and life have to offer. Fortunately for them, they are never alone, for they have Shuran, Hakkaku, Ginta, Ayame, and Shunran to ensure that the bond they have together as friends and family stay as potent as possible. Adding in the likes of Dai, Roku, Kai, Shinta, and especially Rin and Shiori makes Sesshoumaru’s and Inuyasha’s lives far more worth living than ever before.

I hope you all enjoyed this and I will see you in the next submission. Take care, stay safe, and keep on showing your love for Sesshoumaru and Inuyasha, everybody. 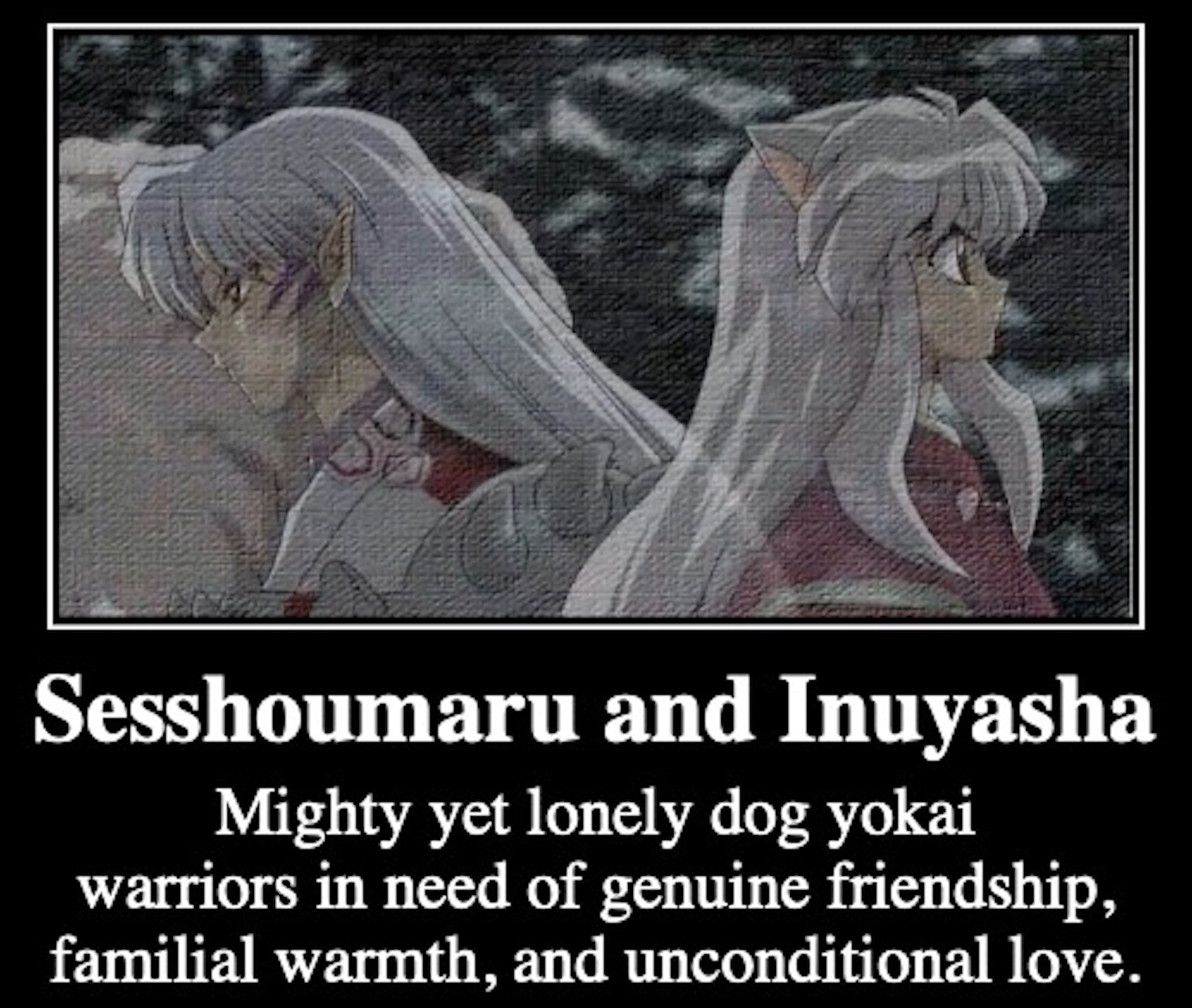