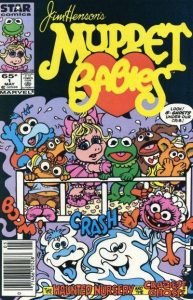 Today, we continue our Monstrous Muppets Mayhem as we look at the first issue of the Muppet Babies tie-in comic, The Haunted Nursery.  These books were from Marvel’s kid imprint, Star, and well, I will say this, this first issue certainly captured the feeling of the classic TV series.  Now, there is one weird thing that I noticed throughout the issue, Baby Kermit wasn’t in his classic sailor outfit.  Kinda weird but I’m willing to overlook that.

The cover is fun and perfect for the type of story of the comic and it is quite fun.

As stated, the plot is rather simple as it deals with the Muppet Babies finding a dungeon-like door in the corner of the nursery that leads them on a wild goose chase to find a ghost as they become more and more afraid. 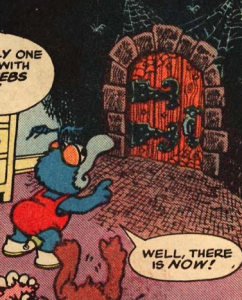 While also dealing with a storm.  It’s a lot of fun seeing the Muppet Babies in an element that feels reminiscent of the show.  This is all set against the backdrop of a storm and that helps to sell the haunted angle as you read and feel the fear of the Muppet Babies.  They come across an interesting-looking ghost creature but turns out he’s just a baby and he is just as scared as The Muppets. Yeah, that tracks.

In many ways, the theme of this comic tracks with a theme of some of the stuff I’m reviewing this month in that it’s okay to be afraid so long as you don’t let that fear stop you.  This aligns with something that Baby Kermit says of

It’s such a small line that does sum up the idea of this issue and the atmosphere of the comic is perfect in aligning with that line.  It seems super creepy and spooky as that door seemingly leads to a haunted castle but as I’ve said throughout, what makes this issue works in that regard.  Oh, turns out the baby ghost had been missing for 300 years and his ghost nanny had been looking for him.

This is such a cute comic that does a great job at capturing the feel of the classic animated series as you see the Muppet Babies’ imagination run wild and et the best of them but as I’ve said throughout, what makes this issue work is how it works in showing that you don’t have to fear everything around you.  Join me next time as we look at a Halloween episode of the Muppet Babies reboot. 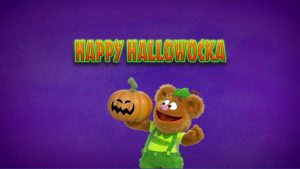