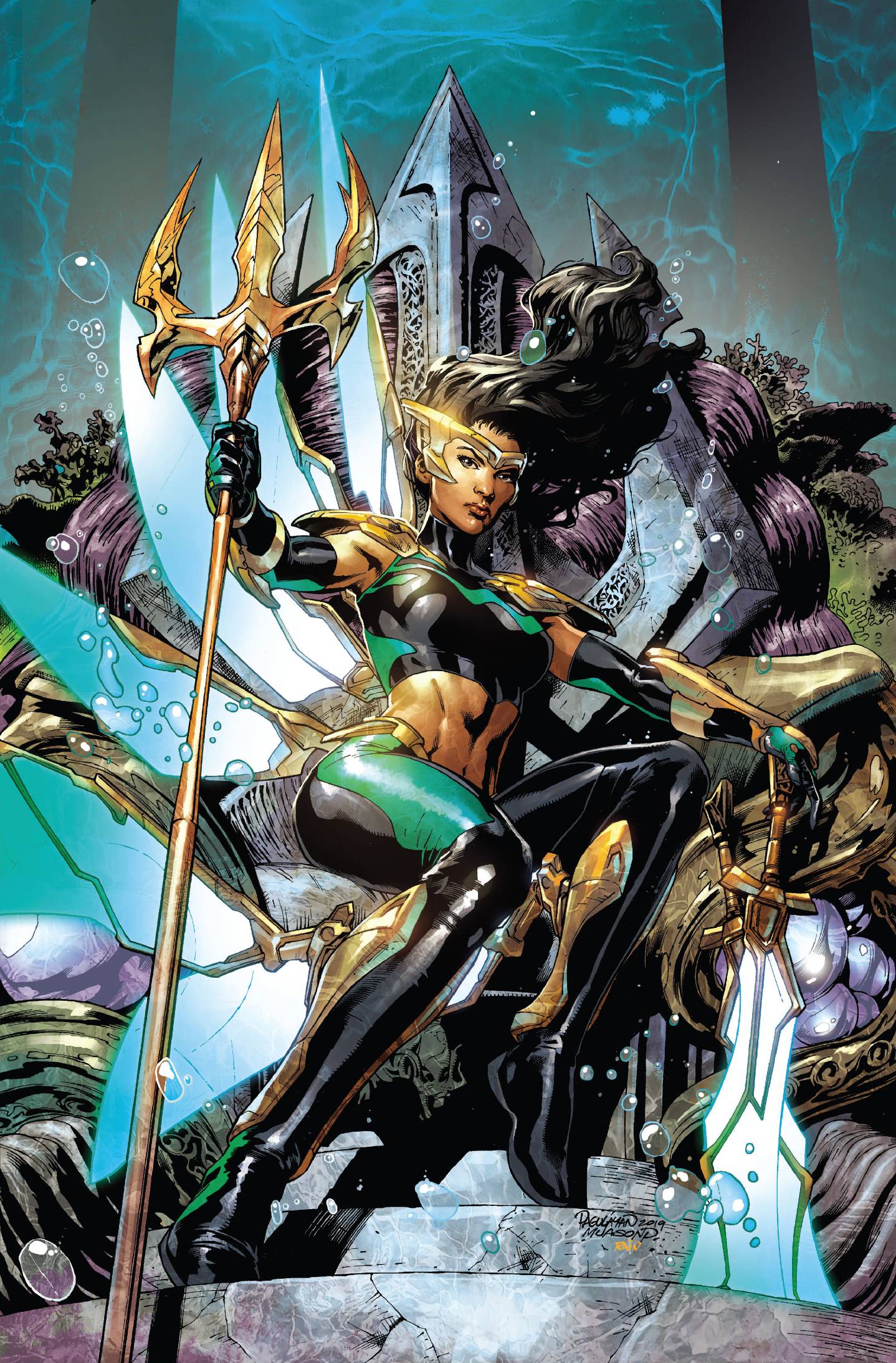 Greg Pak’s Atlantis Attacks miniseries saw two generations of Jimmy Woo’s Agents of Atlas team up to resolve their respective cliffhangers from the Agents of Atlas: Pandemonium storyline.  Sales of Pandemonium apparently didn’t prove as newsworthy as those for The War of the Realms: New Agents of Atlas, so bringing in the old guard might seem desperate and gimmicky.  However, as someone who finds the old guard compelling in their own right, I thought bringing them in sounded promising and wise.  It looks like it only briefly paid off in terms of sales: The first issue required a second printing, like that of the War of the Realms tie-in.  Unfortunately, Marvel took a rather long time after issue #3 to publish the last two parts, a gap I can only partially blame on COVID-19-induced shutdowns.  Of course, I do feel relieved that Marvel bothered finishing the comic at all; the large roster made it seem like a fitting story on which to end my coverage of Agents of Atlas – at least unless the Agents receive a Marvel Studios adaptation worthy of my endorsement.

When Pandemonium left off, the New Agents of Atlas learned that the portals holding together Pan draw their magical energy from an Atlantean dragon’s scales, and that all of the reptilian creatures attacking the city intend to free her from the torture Mike Nguyen inflicts while caging and scaling her.  The New Agents vowed to find an alternate energy source for the portals, so they could release the dragon while ensuring the livelihood of Pan’s denizens.  They quickly found themselves under a time crunch, when Atlantean King Namor the Sub-Mariner launched his own effort to liberate the dragon.

In preparation for this article, I also read, but didn’t review, Greg Pak’s six-part Aero & Wave: Origins & Destinies storyline.  Set and published in between The War of the Realms and Pandemonium, it helped me learn Wave’s origin story, and how she and Aero got caught up in the drama between the underwater tribes of Atlanteans and Sirenas.

We’ve got one day to prevent war with Atlantis… and we’re all Agents of Atlas.

Brawn convinces Namor to allow Atlas one day to figure out how to safely free the dragon, later identified as Atlantean guardian Kala Teer. Jimmy Woo assigns three of his longest-running agents – Bob “Uranian” Grayson, 3D Man, and M-11 – to help Brawn develop an alternative energy source, while Venus, Aero, and Wave accompany Namora on a diplomatic visit to Namor – her cousin – and all of the other Agents prepare Pan’s defenses for another potential attack.  Despite Brawn’s initial suspicions of the older Agents of Atlas, his cross-generational group promptly fulfills the vow to save both Pan and Kala Teer.  Unfortunately, Mike Nguyen continues to wage war on Atlantis, even forming an alliance with Wave’s and Aero’s Sirena friends.

Atlantis Attacks addresses some of the faults I experienced with Pak’s portion of Pandemonium.  The plot feels more focused, with Atlas putting all of their effort into preventing war between Pan and Atlantis.  The artwork looks more detailed, and especially attractive when drawn by Anindito.  I haven’t developed a strong exposure to Namor over the years, but my admiration of him essentially cancels out the lukewarm feelings I hold towards Mike Nguyen – a tycoon who wants too much power for his own good.  This storyline proves Namor as an impressively threatening enemy, yet understandably dedicated to the safety of his people.

As during the War of the Realms, I would say this war gives Brawn and Wave the lion’s share of character development.  Brawn continues to grow into his responsibilities as an Atlas leader, from re-assigning New Agents behind Woo’s back, to revealing a new ability while fighting Namor.  Wave acts as a mediator between Atlanteans and Sirenas, learning to view their ancient conflict from two different perspectives, and working towards making peace between the tribes.  While a reader can easily lose track of all of the Agents, I don’t think any of them behaved out of character.  This sounds especially necessary of the Original Agents of Atlas, as Atlantis Attacks marks the first time I’ve read someone other than Jeff Parker tackle this roster.

Even though Atlantis Attacks has the most Agents of any Atlas comic I’ve reviewed, I also fear that it has less character.  While the Original and New Agents have fine chemistry, they don’t get to explore any interests they might share aside from saving Pan.  The storyline also lacks any in-jokes to Asian-American lifestyle, although the involvement of the Sirenas – figures of Filipino mythology – help keep it from feeling completely void of Asian culture.  These seem like side effects of the comic’s urgent tone, and only disappoint when I compare it to Greg Pak’s other team-up comics.  While Atlantis Attacks can’t equally highlight all of the Agents of Atlas, it provides an engaging and dramatic conclusion to Pandemonium.

One thought on “Atlantis Attacks Review”