In honor of this and the fact that we need to test comments, I repost this blog.

Hi everybody! In celebration of the holiday that most of you know about(go ahead guess), I have decided to count down the scariest moments in the Batman universe, cause I like Batman. Now, fair warning, this article will contain MASSIVE SPOILERS!!!!!!! Do no read a list item if you are unfamiliar with the story in question, unless if you don’t care. So, let’s begin. 🙂

This is the only entry on the list featuring Batman as the main component of fear, which is surprising, as his entire thing is being all spooky and stuff…this features his announcing his presence to the criminals of Gotham, in the most bad-assed way possible… 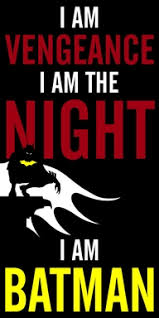 Number 8. What The Hell Happened? 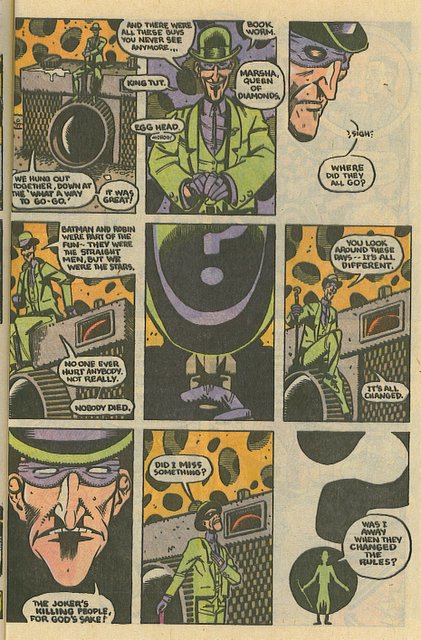 I’ve lost you with this one, you asking, “how is this scary???” While, I’ll explain my view on it as best as I can. ou see, this page(from a comic that is unknown to me, I really want to find this thing), features the riddler, for lack of better explanation, basically just questioning what the hell has happened to comic, they want from the hokey loveable things to gritty epics. He even appears depressed that the Joker is killing people now, and that some of the older villains have just up and disappeared. What makes this kind of scary in my opinion is that, it’s really easy to think of the older stuff as not having happened, because the newer stuff is so vastly different by comparison(this page looks to be at least 20 years old, but that’s besides the point), when you think about it, if an accurate timeline is followed, these people have some pretty fucked up histories, Batman used to carry a gun, Joker goes from murdering psychotic to loveable trickster at the drop of a hat, and the penny plunderer existed…huh…to me, all of this is just creepy. Yes, Bane breaks Batman’s back, you were all expecting this one weren’t you? Some of the less avid comic readers may not know the story behind it, and that’s fine, I’ll simplify it for you. Bane leads Batman in to fighting many, many enemies for months on end, and this wears him down, so, when Bane went in for the kill, he had both a physical,and a psychological advantage over Batman, as Batman was starting to question his ability to do the job. He’s so triumphent that he doesn’t even kill Batman, as…same basic reason as the Nolan movie Bane. Now, Bane may not have had much else to do in the comics since than, but hell, if that isn’t a good start, breaking the Bat, gotta get you some points in Gotham’s underbelly…

Now, I believe James has talked about why Batman should kill the Joker in the past, he even used this handy dandy littl image,

That’s actually the cover for Batman #614, it’s a pretty good read, it involves one of times where Batman comes OH so close to killing the joker beating him to a bloody pulp throughout the entire issue. (Ironically this is like the only time the Joker actually hadn’t done anything, and in fact was innocent of the crime) At the end of the killing Joke, the majority vote greatest Joker story, one of the most merciflly ambiguos things in comic book history happened, Batman is brought into a fit of laughter when the joker tells a joke(it makes more sense if you understand the pacing, but I won’t get into it), basically batman leaps at joker and grabs him b the necck, we than cut to a pddle of water. Did Batman kill the Joker? Since the story was a one shot, it was unknown, since it’s basically been added to the continuity of all modern Batman(and rightfully so, it’s awesome), it’s pretty clear at this point that he didn’t, but what was the original intention? Hell, even in the special edition, the writer teases the reader about how it was supposed to end. We don’t know, and we might never know, but that’s the gut-wrenching part of it.

Also, I’ll pose James’ question here, should Batman kill the Joker? I vote yes, I’ll explain in the comments if anyone cares to have the conversation.

“Every decision you’ve ever made ends with death and misery. People die, I stop you, and you’ll just break out and do it again.”

This is the ultimate argument for Batman killing the Joker(again, comments, wanna have the conversation?) The joker basically fucks himself over by stabbing Batman and forcing him to drop the cure. The Joker is going to die, it’s happening, and Batman says this,

“Do you want to know something funny? Even after everything you’ve done, I would have saved you.”

Now, of course, even with everyone on the team confirming his deat, their is a plausible theory as to how he could have faked his death(he is the Joker after all), but that’s neither here nor there, maybe some other time.

Yeaaaaahhhhhhhhhhhh…another obvious one…Joker beats Jason Todd to death with a crowbar, it’s fucked up, the end.

Now what can I say about him now…he had his own face cut off, is currently preparing to go to war with the entire bat-family, and is perhaps the most psychotic he’s ever been, plus his face has been removed. Now, Joker has just returned after his year long absence in the new 52(big bad DC continuity reboot…sppoooooooooooooooooooooky!!!) and, he’s coming with a vengeance.

Number 2. Death of the Joker

The fuck? Another one? ok..uh…The joker has psychologically tortured and altered Tim Drake, the 3rd Robin, into his new mini me, 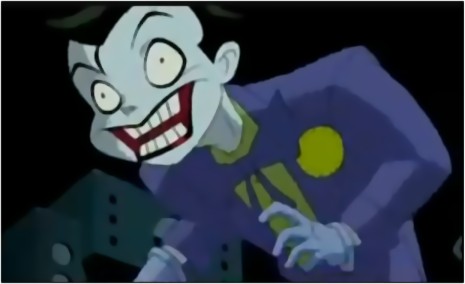 and mini me shoots the joker…

Joker’s dead, and we’re not even halfway through the movie yet…

You know this list is really starting to repeat itself…

Number 1. The Birth of Catwoman

5 of the entries involved the joker…and out of those…3 of them involved him dieing…and not one mention of the scarecrow…I might need to branch out more with my lists…so yeah, thanks for reading! And Happy Halloween!