It Came From the Drive In: Hausu

Haunted House films can be classified as one of the easiest films to come up with, but are very popular. With films like The Haunting, Poltergeist, The Shining, House on Haunted Hill, Don’t Be Afraid of the Dark & Paranormal Activity it can be easly seen why people would enjoy them.

This film makes them look like kid’s movies With Flesh eating Pianos, Flying Heads, Cat Paintings shooting out blood, all of that and more in the 1977 Japenese film HAUSU (House) The film was the feature film debut of TV Ad Director Nobuhiko Obayashi who was hired by Toho when the film was on hold for two years since no one wanted to direct it.

The film tells of a schoolgirl named Gorgeous who was going to Italy on vacation with her father, but when finding out she gets a stepmother, she’s distraught and instead ask her aunt to visit her instead. She accepts and Gorgeous decides to bring along Six of her friends. When they arrive they begin to experience Supernatural happenings in the house and try to survive. 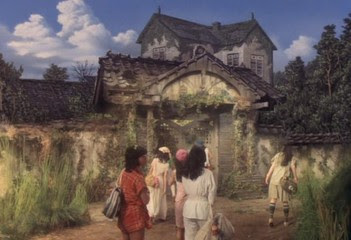 Some of the girls’ personality are giving by their names like Melody plays piano, Kung Fu knows some Martial Arts, and some of the others are like that as well. Most of the characters go through supernatural experiencs like Melody gets eaten by a Piano and Mac’s flying head bites

The Film has painted backdrops in most of the scenes which gives it an unique style. It also has surreal special effects (Which the Director was known for using) and uses different filming techniques which adds to the surreal nature of the film. Plus, it uses some animation in the film which look like markers drawn on the film reel which are added into some of the supernatural scenes of the film. The Film was recognized for having mostly Amateur actors and getting Negative Reviews in Japan; but favorable reviews whe released in the USA in 2009 & 2010, and gaining a cult following with a release on DVD by Criterion Collection.

Final Thoughts: This is one of the most strangest films I’ve seen…But it was awesome. The film is very pretty to look at with the Sets & Painted Backdrops, But it also contains some of the most surreal supernatural scenes you would probably see on film. I can’t really say anything on the writing, but I thought it was ok.

Overall, If your looking for something completely different from the usual Haunted House flick, I’d recommend this.