(Posted originally before the movie came out.)

When the anouncement was first made about this, I wasn’t very sure what to think, like most of the Bronies at the Time. Then the Images of the Mane 6 as humans came out and most Bronies either Ran & Hid under Rocks or they Screamed like Twilight in the Trailer.

Most people were quick to Judge. MostÂ considered this to be a horrible idea and wanted to Ignore it completely stating that the writers didn’t know what they were Doing.

Reminds me of what some people thought of a Certian Season Finale.

And then it became a Spin Off Film and when the Trailer came out, The Sh*t Storm Grew Larger. PeopleÂ ACTUALLY STARTED SENDING DEATH THREATS TO THE CAST & CREW and some of them are considering leaving the show.

Personally, After I Saw the Trailer, I thought it looked GOOD.Â I decided that I’m going to see it with a bunch of my Brony Friends when it comes out.

One of my main reactions for the hate was similar to this: 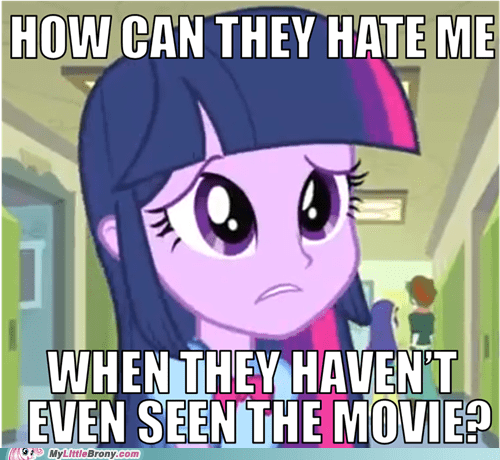 Character Designs I thought it was interesting that everyone in the human world is Multi-colored. Reminds me alot of the Show Doug.

Spike as a Dog I don’t really care about that. They could have made him a Duck & It still wouldn’t have upset me.

Plot I know it looks like a High School Drama but Maybe it’ll be good. So People say he looks like Shining Armor…I Don’t see it. I think he looks more like A humanized Comet Tail.

It doesn’t bug me that Twilight might have a BF in it. Besides, If Shining Armor was in this, He Probably would be in College or have a Job.

And for the death threat thing….ARE YOU F***KING OUT OF YOUR MINDS!??!??! IT’S A CARTOON FOR LITTLE GIRLS!!! WHY WOULD YOU EVEN DO THAT?!

Most Bronies are treating this like its A Type ofÂ Cancer! It’s Extremely Premature and I think you should at least give it a look before you judge it.

I’m doing the same thing with Terrence Malick. I’m watching his films before I actually can saw anything about him & his work.

If you have some doubts about the whole thing, I ask you to consider a few things:

1. It’s Intended Audience is Little Girls. It wasn’t made ONLY for Adults.

2. Alot of Bronies wanted an MLP:FiM Movie. And now that we get one, you complain.

3. It’s A Spin Off. It mostly likely will not be Canon with Season 4.

4. DON’T JUDGE A BOOK BY IT’S COVER!!! This is the One Thing everyone did & is doing with the film right now. Yes, It looks like a Teenage High School Drama film but Maybe it will be like a John Hughes film (Except with Ponies)

Overall – It Looks Good. I’m going to see itÂ June 22th with a bunch of my Brony Friends. I’ll postÂ a review/My ThoughtsÂ on the Film a few days later.