We have now hit an interesting area in our look at live-action Cinderella villains series as I enter back into the world of Once Upon A Time villains.  The next three villains I’m looking at all come from this show and this’ll close out the event.  On that note, a couple of caveats of what I decided not to cover,  the first being Stockard Channing’s character from the movie, Confessions of an Ugly Stepsister as that movie is next to impossible to find.  The next is Anatasia from the Once Upon a Time in Wonderland spinoff as the creators played coy with whether or not, she was Cinderella’s stepsister and as we will see when I look at the Stepsisters here, they don’t even use those names until we meet new versions of the characters in the final season.  And lastly, the Descendants version of Lady Tremaine as there is truly nothing to say about that version of the character as she is only in one scene. 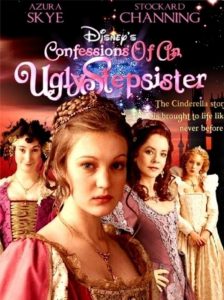 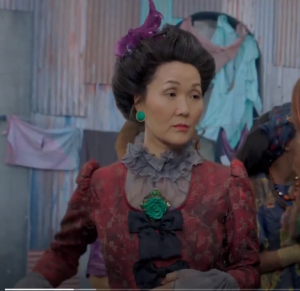 With that said, there is plenty here to look at with these last three Cinderella villains. Something that is so insane is that the original Lady Tremaine has one of the longest gaps in appearances as she first appeared played by an uncredited actor in season one and wouldn’t show up again until the fourth episode of season six played by a new actor. Considering that Lady Tremaine was barely in season one and she has no speaking lines, there isn’t much point in looking at her appearance there is rather pointless.  As we don’t actually get to know what OUAT’s first version of Lady Tremaine is like until she shows up in the show’s second to last final season. 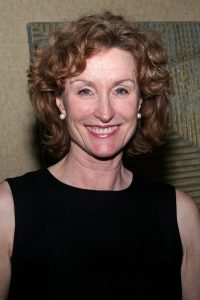 This’ll be more important for the next two entries but it is key to remember that Once Upon A Time is not told chronologically at least concerning its flashbacks so while this may have been the first time we saw Lady Tremaine in OUAT,  it is not her first chronological appearance.

So,  that means her first true appearance we have to look at came days before the Prince’s Ball where we see her addressing Cinderella as the young girl is sweeping.  As an invitation from the Prince’s footman is delivered and this will be important when looking at the Stepsisters portion of this article. This episode very much starts how you’d expect a Cinderella story to begin with Cinderella being in a servant position and her stepfamily being cruel to her before taking a turn.  While OUAT had run its course by this point,  it was nice to see it still had some of that magic that people loved of taking a fairy tale everyone knows and putting a new spin on it.

Her personality feels akin to what people would expect of Lady Tremaine and like some other versions I’ve talked about, she is driven by revenge, this is most evident in Storybrooke scenes where she wants revenge against Cinderella, who’s now known as Ashley for ruining her life. It had been years since the First Curse had brought the fairy characters over to the Land Without Magic whereas Lady Tremaine and her daughter, Clorinda had been in the Land of Untold Stories. She chose to go there to pause and hoping when she would return everything would make sense. And the only reason the people from the Land of Untold Stories had shown up in Storybrooke is that Mr. Hyde who was the main antagonist for the first five-six episodes of the season had brought his friends over.  We get an idea of how this scares Ashley/Cinderella as at one point at the beginning of the episode, we see her asking for a list under the guise of seeing who has kids from this Land as she runs a daycare in Storybrooke.  And we get an adorable scene of Hook and her daughter. Maybe it’s the Disney fan in me but I love seeing these characters I grew up with as parents.

The biggest detriment to Lady Tremaine only appearing in one episode is that her relationship isn’t that well-defined.  While you do get the sense that she hates Cinderella and feels Cinderella is lesser than her, there isn’t much else to her.  It’s not that it’s bad but with her only being in one episode, this relationship never truly got the time to develop beyond if had been in a few more episodes. While there are two stepsisters, Tisbe is not important to this episode that much but she does seem to follow in her mother’s footsteps whereas Clorinda is actually nice to Cinderella and it is just an act to please her mother. This is something many Cinderella adaptions tend to leave out but it is true to the Perrault version of the Stepsisters and this is something Disney would do with Anatasia in the two direct-to-video Cinderella sequels. 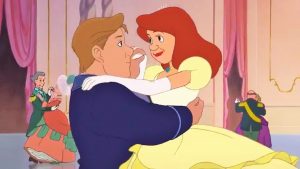 Seeing this detail included is always a nice treat because so often Cinderella adaptions go for the easy out of having both step-siblings being mean when it’s more interesting if one is nice as it shows there is room for people to grow and change.  The relationship between Clorinda and Cinderella is what truly drives this episode as Cinderella blames herself for ruining her sister’s chance at a happy ending after Lady Tremaine got Cinderella to confess Clorinda and the Prince’s footman, Jacob were in love and she had given them a key that would take them to the Land of Untold Stories.  Cinderella wanted to make things right the night of the Ball when Lady Tremaine took her away but it was too late. This had been eating Cinderella up for years and now her past got up with her and she felt the need to atone for what she did to her sister and knowing that Jacob was brought over to the Land Without Magic and this was her chance to make things right for Clorinda. I believe that this also speaks to why Lady Tremaine is a villain for Cinderella and her daughter to overcome, this episode is more interested in the sisterly relationship between Cinderella and Clorinda.  It reminds me of what Cinderella says in her song from the pilot movie for Sofia The First. This does seem to fit with what is observed of Cinderella and Clorinda in this episode but with Cinderella in the role of someone needing to right a wrong that caused her sister so much heartache.

Honestly, this is the least interesting aspect of Lady Tremaine, she wants revenge against Cinderella as she feels Cinderella ruined her life.  There’s nothing all that special about this type of motivation and oh she also wants to kill Jacob to keep Clorinda from getting with him but again, that’s nothing too special.

I could go with her attempting to kill Cinderella as that is pretty brutal. But I think the evilest thing Lady Tremaine did was tear Clorinda and Jacob apart all because she didn’t approve of him nor think he was good enough. She sent two girls spiraling with Cinderella blaming herself for what happened to Clorinda and causing Clorinda to hate Cinderella for years causing a rift between two sisters that truly cared for one another.

Lady Tremaine is caught in time and stopped by David/Charming who is the sheriff and the next time we see her, it can be assumed that she has been arrested as she is performing community service in an orange jumpsuit under the guidance of Grumpy. That does seem to be a fitting punishment for someone who believed themselves to be of utter importance to now be on the lowest wrung of society.

Is Lady Tremaine A Good Villain?

She’s fine but nothing special, I think the 2015 remake version is the better Lady Tremaine but at the same time, it’s not exactly fair to compare a 45-minute episode to a near 2-hour movie. As I said earlier, she wasn’t given the opportunity to be fleshed out as season six was her only true appearance and I think perhaps if she had been in more episodes, she might have been a little better.  Join me next time as things get confusing with the seventh season of this show as I look at… Tags: A Look at Disney ABC Cinderella Lady Tremaine Once Upon A Time Villains Profile