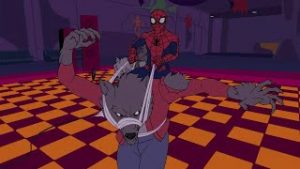 Marvel has quite a bit of horror characters in their line-up. When looking at werewolves from Marvel, there are two prominent characters from The House of Ideas.  The first is Werewolf By Night who debuted in  1972 and he will make his MCU debut in an upcoming Halloween special for Disney+ 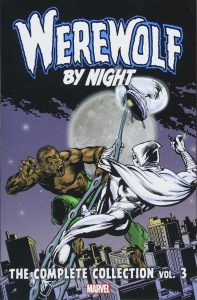 This Marvel Werewolf has made quite a few appearances in animated Marvel shows and may look at his MCU special in the future but there is something else that ties more into this review considering the guest hero in this episode.  However today, we are looking at a different Marvel werewolf, one that is more attached to Spider-Man, The Man-Wolf 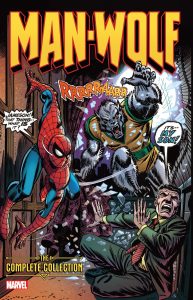 The Man-Wolf is John Jameson,  the son of J. Jonah.  It was Gerry Conway who had the idea of turning JJJ’s son into a werewolf in the 70s.   He was mostly looking for something to do with the character.  Both John and Man-Wolf have had a lengthy amount of appearances in media.   John was seen in Raimi’s Spider-Man 2 and Man-Wolf before his appearance in this show was seen in Disney XD’s Ultimate Spider-Man. Now I may not be an expert Spider-Fan but I do know that in most versions of the story, John Jameson is an astronaut and that has a connection to him becoming The Man-Wolf however the 2017 show seems to forego that part of Man-Wolf’s origin.  I looked up this to make sure I wasn’t off track as it in part lies with his mission on the moon.

Once his mission was complete, he had a strange urge to obtain the gemstone from quarantine and have it made into a pendant, which he wore around his neck. The stone reacted to the moonlight on the first night of the next full moon, transforming Jameson into a savage lupine creature.

There is a similar idea here but instead of a gemstone being part of what turned Jameson in this show, it was a gamma crystal.  And as soon as you that word, I think you can figure out who the old webhead teams up with this in the episode. Truly bringing in The Hulk was a smart idea as he too as a monstrous character has horror connections and they also spell it out in how Dr. Banner can relate to having to deal with turning into a type of rage monster.  Now much like Revenge of the Monsters, this is an episode where Spidey and the Big Green Guy have to fight other people that were turned into werewolves by Man-Wolf.  Now, it’s important to note that most of these werewolves are just teenagers at Peter’s tech-based high school, Horizon High. 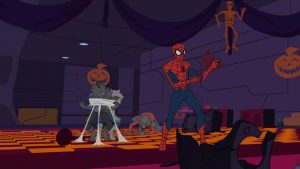 Now as I mentioned most of the wolves that Spider-Man and The Hulk fight in this episode are teenagers and that is also true of John Jameson as we learn that he was employed by Norman Osborn to test the Gamma Crystal. As mentioned Pete attends a science-themed high school and that is how they end up saving the young students that were transformed.  And that is a great element to show how science is such important to a character such as Spidey.  Sure, the 2017 show may have overdone this aspect but it does work.  And that’s a fun element that works in the episode’s favor considering the heroes are dealing with a werewolf that was turned due to scientific means.

Oh, didn’t have anywhere else to put this but I do love that Gwen is dressed as Little Red Riding Hood in this episode at the school’s Halloween dance where the episode mostly takes place. 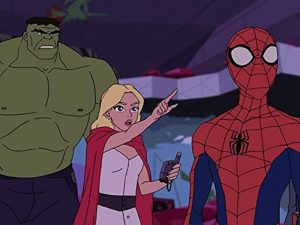 I understand this review wasn’t very in-depth but I believe this is an alright episode that could be a lot of fun for Spider-Man fans around the spooky season.   As I mentioned,  we aren’t quite done with Hulk as Werewolf by Night showed up in an episode of his Disney XD show, Hulk and the Agents of Smash titled The Hulking Commandos.