Today I continue my look at wolf villains from Disney.  YouTuber Colinslookback has a wonderful Disney Villains retrospective series but he would ignore characters such as today’s entry as they are just predators acting upon their instincts.  While I do see where he is coming from in a certain sense,  characters such as The Wolf still put our heroes in danger and that is why I think it is fair to look at them.  In many ways,  this is similar to when I look at Man from Bambi years ago.

The Wolf first debuted in the Peter and the Wolf segment from Make Mine Music, which is oddly missing from Disney+.  It is based upon the classic musical piece of the same name with some key differences such as the Duck surviving in this version.  The entire segment is just a bit fun as Peter tries to hunt The Wolf and things seem rather dire for him.  That is until The Wolf is caught by other hunters. 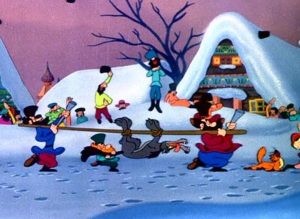 I believe that is a large element in what makes The Wolf so much fun and while he is scary in the Make Mine Music segment, I believe he is, even more, intimidating in his follow-up appearance in Lambert The Sheepish Lion where we see him drag the titular character’s adoptive mother away from the herd in an attempt to eat her. 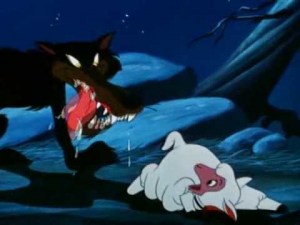 As stated, his second appearance makes him scarier, and perhaps that’s a difference between the two protagonists as Peter went out looking for him whereas Lambert was scared by him and had to build up his courage to save his mother. Which led to him hanging from a tree branch. 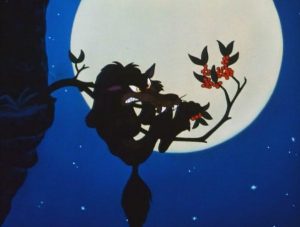 Is The Wolf a Good Villain?

Perhaps villain isn’t the right word as he’s more a threat that our heroes need to overcome.  And in that aspect, he works well.  He may not be memorable compared to other characters I’ll cover but if nothing else he is fun to write about. The next entry will not be until later in the month as I head Into The Woods and face 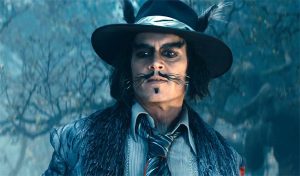