Say what you will about the WWE, but one thing WWE definitely got right is the entrance music. Who can forget the sound of shattering glass at the start of Stone Cold Steve Austin’s entrance, Motorhead’s ‘Time to Play the Game’ when Triple H arrived, Shawn Michaels’ ‘Sexy Boy’, or the car wreck sounds that began Mick Foley’s entrance as Mankind 2.0 and Commissioner Foley?

WWE music captures a wide variety of moods, from the loud and arrogant (“I Came To Play”, by Downstait for the Miz’s entrance) to the upbeat (“Let’s Light it Up”, by Kari Kimmel) to various “I Am” songs (“The Time is Now”, John Cena’s entrance music).

There are also the darker, more brooding, and sometimes downright scary entrance musics. These are the ones that bring chills to fans watching live in the arena, or watching at home, or maybe listening out of context via CDs, playlists, and so on. WWE has had a number of scary, spooky, or unsettling characters throughout the years, from the Undertaker to the Boogeyman to Bray Wyatt, and more. And WWE’s music department pretty much nailed it when it came to music that enhanced the spooky nature of these characters. 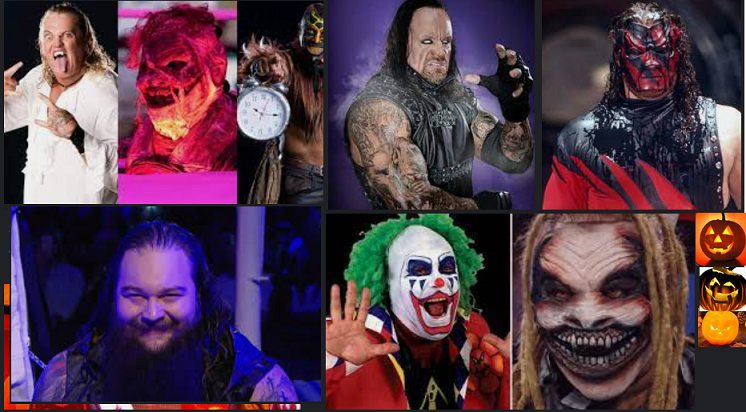 So here are some of my favorite WWE scary entrance musics. Many of which still bring me chills even long after the wrestlers who originally used them have retired, retired these particular gimmicks, or otherwise vanished from the wrestling scene.

I’m listing them in no particular order. But be advised – there’s some delightfully scary stuff here that you might not want to listen to alone and in the dark. Just perfect for Halloween.

This music is the entrance music of the vampire-themed Gangrel, and the Brood. Gangrel would make his entrance ascending from a ring of fire on the stage near the entrance to this music, in a darkened arena. The music is an unsettling techno track, with scary whispers at various moments. “Blood…”, it sounds like at certain points.

It’s certainly creepy to listen to, both in a darkened arena and at home. It’d be right at home in a ‘Blade’ movie. Gangrel more or less faded into obscurity, and the Brood (Edge and Christian) went on to bigger and better (and less Gothic/vampiric) things, but this track continues to haunt me years later.

Doink the Clown is a character that’s basically wrestling’s equivalent to Bozo, in the sense that he’s been franchised out and played by a number of different actors. When appearing as a face, his music is more or less the standard circus calliope music. But as a heel, it’s a different story.

Doink’s heel persona is that of the evil clown, inspired by the Joker or Pennywise the clown from Stephen King’s It. This music reflects this, as cheerful circus music gives way to dark, scary, music punctuated at times with chilling, maniacal laughter. If anything, this music is even scarier listening to it at home than it is in a wrestling arena. It’d be right at home in a horror movie, or a horror video game.

When the wrestler Sid Vicious joined the WWE (then the World Wrestling Federation), WWE chose not to use that name, so as to avoid confusion with the famous rock musician of the same name. As a face, he was known as Sid Justice, but when he became a monster, scary heel, he was Sycho Sid. This music is, of course, for his dangerous heel persona.

The music is, at times, reminiscent of a certain shower scene, but this gives the impression of someone wanting to take his mayhem just about anywhere. This version contains ominous whispers, including mention of his finishing move, the powerbomb, and gives the impression he’s going to use that move on everyone in sight. It makes him sound definitely like the sort of person you’d be walking on eggshells around, and want to avoid as much as possible.

This is the first theme music for Kane, the Undertaker’s half-brother who (according to the gimmick’s story) was badly burned as a child, and since then has had an unhealthy obsession with fire. The chilling opening notes of this music play when he makes his entrance, and also when he lays out an opponent in the ring. The music continues with a (dare I say it) burning intensity, bringing the mood of a terrifying, destructive force of nature.

Mick Foley of course is known as a ‘hardcore legend’, and he wrestled under several different personas. One was the hippie Dude Love. The other was the barbed wire bat-wielding, pain-loving, pain-inflicting Cactus Jack. And another was Mankind, who had two different sub-personas. Mankind 2.0 (as I call him) was a sort of lovable disheveled goofball with his sidekick Mr. Socko, but his predecessor, Mankind 1.0 was a deranged mental patient who wore a mask much like Hannibal Lecter, and who ranted madly about the world and his suffering. He would say things like “I don’t suffer from insanity – I ENJOY EVERY MINUTE OF IT!!!”

According to Mick Foley’s book, Have a Nice Day, Foley himself came up with much of the concept for Mankind after it became clear WWE would like him playing a different character than Cactus Jack. The character the WWE came up with was depressingly generic and one-dimensional, so Foley suggested a whole bunch of improvements. Including the crazy personality, and the name ‘Mankind’, so that when he ranted about the madness of mankind, you would wonder whether he’s talking about his own insanity or making an indictment of humanity. It was also Foley’s idea that Mankind would have two musics, one for his entrance and the second for his exit.

The compilation version of the two music tracks for the original Mankind 1.0 persona is titled ‘Ode to Freud’ (implying that psychological analysts would find this character to be a very fascinating study), and includes some of Mankind’s crazy rants. The first half is dark, ominous music, as if you are being introduced to that shady disreputable asylum on the hill. The second half, starting at the 1:54 mark, takes a turn into a subtly disturbing piano track. Words can’t do justice to how bizarre and unsettling this one is.

No list of spooky WWE entrance music themes would be complete without at least one entrance music from the Undertaker. And Graveyard Symphony, in its many variations, never fails to bring a chill to one’s spine. The tolling of the bells, combined with an homage to classical funeral marches, calls to mind mortality and impermanence. The added storm sound effects in V2 add to the eerie atmosphere, and bring a sense of a weakening of the barrier between this world and the next, and unknown (and possibly unknowable) forces stirring.

It’s an iconic entrance theme for one of the WWE’s most iconic superstars.

And that’s my list of my favorite scary WWE entrance music. Sadly, the Boogeyman’s entrance music and the Ministry of Darkness music didn’t make it onto this list, as I didn’t think those tracks were quite as scary as the ones that did make the list. They do get honorable mention status, though. As does Bray Wyatt’s ‘Live in Fear’, and The Fiend’s entrance music.

All in all, these tracks are great for listening to this Halloween season to get you in the right mood. Are there any scary ones I forgot to mention even in the honorable mentions? Let me know in the comments.