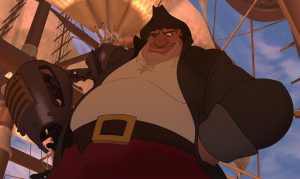 We’ve now reached the final entry in my look at the various adaptions of Long John Silver from Disney’s adaptions.  This final take is perhaps the most interesting version for many reasons.  Let’s start with this is a science-fiction take on the story and surprisingly mixing sci-fi with a pirate adventure works rather well.  IT also brings a new element to the story.  The 1950s movie was just a straight adaption, the Muppets adaption brought a comedic bent to the story whereas this movie seems to focus more on the emotional journey that the characters go through and that is felt with the relationship between Jim and Silver in this movie.  Out of the three versions of Silver from Disney adaptions, the one from Treasure Planet is the most sympathetic.  Robert Newton’s Silver was nothing more than a bad guy through and through. There were glimmers of him caring for Jim but his villainous side won out in the end. Tim Curry’s Silver was goofy and silly to fit with the tone of the Muppets. Brian Murray’s Silver makes you want to root for him to do the right thing. 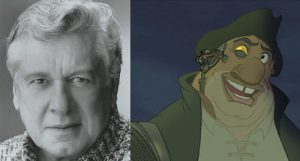 There is just something about Murray’s Silver that for the most part makes him seem rather warm.  I say for the most part as he is still a pirate after all.  And as I’ll discuss when looking at his personality, he has a certain gruffness.   This comes through most in Murray’s voice performance of Silver because of the way Silver talks, you want to trust him but are never truly sure if you can. 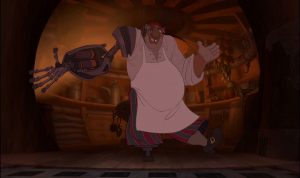 Much like Curry’s Silver, we do not meet Murray’s  Silver until we board the ship and that again helps to set up what kind of person Silver is.  It also in a way makes him seem more trustworthy than he is at first glance.

Silver in this film is rough around the edges. He has a rough exterior hiding a gentle soul beneath that gruffness. He’s not a bad person.  He is a good person, even if he may have convinced himself otherwise.  This is most evident in how he attempts to downplay how much he has come to care about Jim.

There are two moments that I believe sum up Silver’s relationship with Jim in this movie.  The first is the montage set during the song, “I’m Still Here”

All the moments in this montage show how these two go from tolerating each other to becoming a family.  The biggest moment that alludes to this is when Silver sees a sleeping Jim after having cleaned all the dishes and he places his jacket on the boy as a blanket.  Speaking of family,  this montage works in another aspect.  It contrasts the relationship building between Jim and Silver with the relationship Jim never had with his father.   As we see his father walk out on his family when Jim was still a little kid. 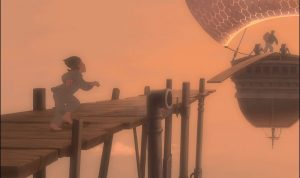 It’s interesting how this character never says anything and until looking up images for this blog, I had no idea that this character had a name.  He’s named Leland but I didn’t know that and I don’t think it matters either because the way the movie presents him shows him as someone that doesn’t care about his family.  However, when we see Silver looking after Jim, we see someone that does care.  This brings me to the other moment that highlights the strength of the relationship between these two.

This speech here further highlights the fatherly nature of Silver.  His telling Jim that he has the “making of greatness”  truly sounds like something like a father would tell them when they’re proud of them and that is what we are shown with the Jim and Silver relationship.

While Silver from Treasure Planet may be the most sympathetic version of the character, he does seem to pull off the evilest deed of any of the Disney Silvers when he starts a mutiny on the ship. 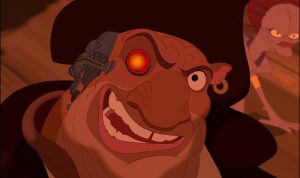 This is perhaps the one time where Silver becomes truly villainous and you think that there’s no hope of redemption for him.  It’s honestly rather sad to see him give in to his more unscrupulous side as he damages the ship and is willing to attack the crew. Admittedly, he doesn’t commit the worst deed in this film as that goes to Mr. Scroop killing Mr. Arrow but for what Silver does, this is pretty bad.

The Last We See of Long John Silver

Interestingly, the last time we see John Silver isn’t as a person but rather as a cloud after Jim has returned to The Benbow Inn. 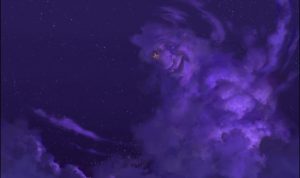 This is such a nice touch because while it’s not Silver himself, it shows Jim thinking about him and how much Silver has come to mean to him that he perhaps is wishing that Silver could be there joining in the celebration at the Inn.  He has truly come to love Silver. Now, while this is the last time we see Silver in this movie, there were plans for a sequel but considering that this movie didn’t do all that well at the box office, the sequel never came to be.  Jim and Silver would have reunited.

Jim, Kate, and Silver soon reconcile with one another and Silver reveals that he has smuggled a ton of weapons that can help destroy the Centurion.

Now, there was a sequel game that did reunite Jim and Silver. 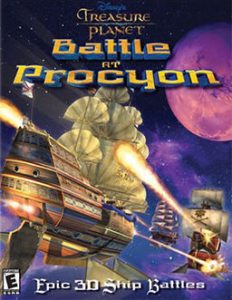 So, there is that.

Yes, absolutely yes.  He’s in my opinion the best take on Silver of the three I’ve looked at in this series.  There is so much weight, depth and emotion brought to his portrayal of the character that truly makes you care for him.  As I said throughout, he’s a character that you root for to do the right thing.

While I’m done looking at the various adaptions of Long John Silver, I’m not quite done with villains yet because coming at a later date will be something else I’ve wanted to do for a while is Theme Park Adaption Villains.  This is something I’ve wanted to do for a while. This’ll cover six villains and that is because I’m leaving out the Pirates of the Caribbean movies as there are enough villains in that franchise for that to be its own series.  That’ll come sometime in the future and you can expect at least one of them to be a crossover.