This “What if This Character and This Character became Friends” meme originally belongs to topcatmeeces97; is dedicated to everybody who admires The Splendid Seven consisting of Sesshoumaru, Inuyasha, Ayame, Shuran, Hakkaku, Ginta, and Shunran as well as The Fine Four consisting of Ichise, Kiba, Ran, and Cheza; and everybody who might think that their friendship would transcend just being friends but part of the family. Sit back, relax, and witness how The Splendid Seven can welcome The Fine Four, thus joining forces a The Excellent Eleven.

I talked about how much Inuyasha, Wolf’s Rain, and Texhnolyze meant to me growing up in my tweens and in my teens, and it was all thanks to Sesshoumaru, Inuyasha, Ayame, Shuran, Hakkaku, Ginta, Shunran, Kiba, Cheza, Ichise, and Ran being characters I thoroughly rooted for since my younger years. Despite the varying qualities in each of these shows, it was my most favourite characters I kept coming back to. There was strength, charisma, and positivity in each of them that made them all the more infectious and inspirational. Additionally, I have been toying with the idea of having these seven yokai warriors being the greatest of friends with two main residents of Lux who thoroughly understand each other, thus having the potential to be a couple if not for their tragic fates, one wolf in search of Paradise, and his lovely flower maiden girlfriend. The result is a surprisingly warm and inviting familial bond that transcends just being friends let alone allies.

The headcanon I have for this crossover to happen commences during the time when Sesshoumaru was 13, Shuran was 12, Inuyasha was about to approach 12, Hakkaku was 11, Ginta was about to approach 11, Ayame was 9, and Shunran was 7. Sesshoumaru, Shuran, Inuyasha, Hakkaku, Ginta, Ayame, and Shunran discovered they had new neighbours from The Wolf Elder, Toga, Inukimi, and Izayoi. Those new neighbours were 10-year-old Ichise who aspired to be a great kickboxer and Muay Thai practitioner living with his adoptive adoptive parents Keigo and Mana Oonishi as well as his adoptive older brothers 13-year-old Shinji and 11-year-old Hal, 9-year-old Kiba who was an aspiring judoka living with his two older brothers 13-year-old Tsume and 10-year-old Hige, his 5-year-old youngest brother Toboe, and their adoptive parents Hubb Lebowski and Cher Degré; 5-year-old Ran who was a taciturn little doll, mask, and puppet collector living with her grandfather the Gabe Elder, and 4-year-old Cheza who was a cheery little flower collector living with her grandmother Hanabito. As Ran and Cheza were only children, The Wolf Elder would always bring his granddaughter Ayame and his surrogate granddaughter Shunran over for a visit. Ayame, Shunran, Ran, and Cheza developed a sisterly bond complete with having tea parties with Cheza, puppet shows with Ran, gymnastics and dancing sessions with Shunran, and kung fu plus karate sessions with Ayame. Ichise’s and Kiba’s great friendship with Sesshoumaru, Shuran, Inuyasha, Hakkaku, and Ginta developed really quickly and became the best of friends, considering the many sparring matches they have in various martial arts, soccer matches, basketball matches, and having fun dog-piling matches, especially as Ayame, Shunran, Ran, and Cheza find it really hilarious that Sesshoumaru, Shuran, Inuyasha, Hakkaku, Ginta, Ichise, and Kiba are tackling each other. The seven boys and the four girls would even have a lot of playdates together in the park, the playground, recreation centres, and the waterpark their most favourite place in the world where they can go down waterslides. Their collective childhood together showed that they are the tightest of friends.

As soon as Sesshoumaru, Shuran, Inuyasha, Hakkaku, Ginta, Ichise, Kiba, Ayame, and Shunran approach their teens and Ran and Cheza approach their tweens, their friendship would still persevere but with a few changes. By the time Inuyasha reached 18, he has already been married to the 15-year-old Ayame ever since he was 14 and she was 11 thanks to Ayame’s grandfather blessing their union ever since they were little children and Sesshoumaru being just as approving of his younger brother being in a loving relationship with his former first love. In fact, back when Sesshoumaru was 15, he even encouraged both 14-year-old Inuyasha and 11-year-old Ayame to finally be together because he knew fully well that they would be happy with each other. Although Sesshoumaru was Ayame’s first crush, she figured that she was much happier with Inuyasha. 17-year-old Ginta and 13-year-old Shunran were very much engaged when they were young children and were really happy in each others’ company which made 18-year-old Shuran and 17-year-old Hakkaku really proud of them. 16-year-old Ichise and 15-year-old Kiba had a brotherhood that was just as deep as their relationships with their biological brothers, while 11-year-old Ran and 10-year-old Cheza were just as happy being best friends forever. When it came to Ichise’s and Kiba’s respective relationships with Ran and Cheza, they were still great friends, but it seems like Ran and Cheza were starting to find Ichise and Kiba a whole lot more attractive. Ichise and Ran would not start dating until three years later when he hit 19 and she hit 14, and this was the same case for Kiba and Cheza when he hit 18 and she hit 13. By the time Ichise and Ran as well as Kiba and Cheza finally affirmed their relationships as boyfriend and girlfriend, 22-year-old Sesshoumaru, 21-year-old Inuyasha, 18-year-old Ayame, 21-year-old Shuran, 20-year-old Hakkaku, 20-year-old Ginta, and 16-year-old Shunran were really proud of their four best friends and wished them well on their respective relationships. Even when Inuyasha, Ginta, Ichise, and Kiba were in varying degrees of relationships with Ayame, Shunran, Ran, and Cheza, they never forgot that romantic love was not the only important attribute that should matter, but also the interpersonal relationships they have been having with each other plus Sesshoumaru, Shuran, and Hakkaku as one big family.

Between their 20s to early 30s, all eleven friends would realise just how much their children have grown to young adults with their own passions and desires in life. 33-year-old Sesshoumaru, 32-year-old Inuyasha, 29-year-old Ayame, 32-year-old Shuran, 31-year-old Hakkaku, 31-year-old Ginta, 27-year-old Shunran, 30-year-old Ichise, 25-year-old Ran, 29-year-old Kiba, and 24-year-old Cheza may have children who have been growing up to be just as strong as their parents are, but they would still have enough strength to be defend themselves against harm and continue to be there for each other after all these long years. Sesshoumaru, Inuyasha, Ayame, Shuran, Hakkaku, Ginta, and Shunran would continue to be martial arts instructors with Ichise, Kiba, Ran, and Cheza being continuously dedicated in their crafts as martial artists and medical practitioners, thus truly making it a family passion and a family business they are happy to have passed down from generation to generation.

As they reach full adulthood, all of their children would inherit that same tight friendship their parents had when they were very young which would also hold up nicely when they reach their teen years until adulthood. With Sesshoumaru approaching 41, Inuyasha approaching 40, Ayame approaching 37, Shuran approaching 40, Hakkaku approaching 39, Ginta approaching 39, Shunran at 35, Ichise at 38, Ran at 33, Kiba at 37, and Cheza at 32, they still have that strong familial bond that defined them throughout the years. What has solidified their relationship is just how much genuineness, closeness, and trust their was with these eleven friends who have always treated each other like family. Each and every one of them believe in each other and encourage each other to be the best versions of themselves. They would never give up on each other because the trust they have in each other is a whole lot more priceless than any precious metal in the world. Nothing is ever going to break their unconditionally loving bond.

The close relationship that Sesshoumaru, Inuyasha, Ayame, Shuran, Hakkaku, Ginta, Shunran, Ichise, Kiba, Ran, and Cheza have as friends transcends mere friendship, as they truly are a family. What started out as fun-filled adventures as children would grow into a tighter bond as they reach adolescence and adulthood. I am never going to abandon this fine group of eleven friends which is the glorious result of an Inuyasha, Texhnolyze, and Wolf’s Rain crossover, and I can see them all lasting for a very long time. I might even adapt them in different scenarios if I want to. Whether they be in my jungle warlord AU, Inurangers AU, and/or anything that has to do with Greek mythology or anything that shows that the seven guys can be super strong and the ladies can be just as formidable as the guys, my brain is just bursting with ideas for them.

I hope you all enjoyed this, and I will see you in the next submission. Take care, stay safe, and please do not forget to show your love for Sesshoumaru, Inuyasha, Ayame, Shuran, Hakkaku, Ginta, Shunran, Ichise, Ran, Kiba, and Cheza as a wonderful group of friends akin to being a family, everybody. 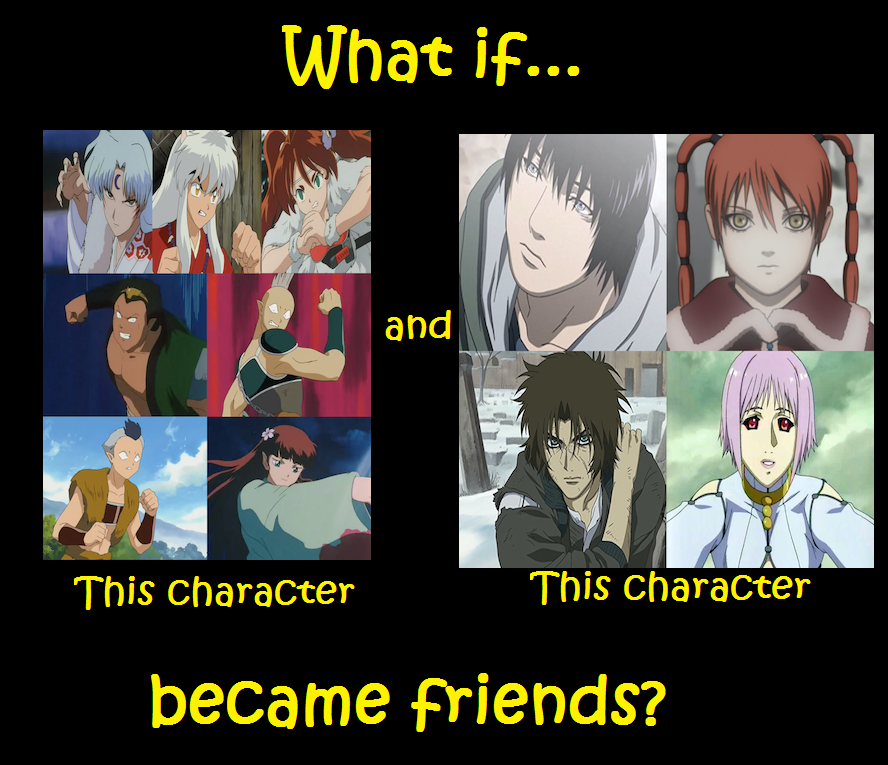