This “Character Fights This Character Over That Character” Meme originally belongs to BTNFStudios and is dedicated to all of the wonderful Basuli x Hercules x Tarzan shippers, partisans, and loyalists of the world. Sit back, relax, and find out how a handsome demigod of strength Hercules would stop two jungle warrior brothers like Basuli and Tarzan from bickering, squabbling, and quarrelling over him.

There is no doubt that Hercules is Basuli’s and Tarzan’s most beloved honeybun, hubby, love god, and overall gladiator in shining armour. Both of them love him body and soul, and their love for Hercules is as deep and wide as the Aegean Sea. Complimenting this is the strong familial love Basuli and Tarzan have for each other as brothers as well as Chief Keewazi’s most beloved sons. However, just because Basuli and Tarzan are the tightest of brothers does not mean that they have their moments of hyper-competitiveness and sibling rivalry. It is expected that both Basuli and Tarzan have this loving yet competitive relationship as brothers, given how much they care for each other and challenge each other to become stronger than who they are. Basuli and Tarzan may also be of the same age, but Basuli is older than Tarzan by four months and is considered to be the first-born son of Chief Keewazi with Tarzan coming in next. Sure, George of the Jungle is the oldest son and Maugli is the youngest son, but George is more reliable as the Waziri tribe’s overseer, thus putting Basuli in the position of power and Tarzan being his most loyal adviser. Inserting Hercules into the picture in Basuli’s and Tarzan’s love life may seem interesting, but there is going to be rivalry occurring between the jungle brothers when it comes to who is Hercules’s favourite husband. Nevertheless, Hercules is always the one man who will always find a solution to this conundrum.

Hercules is not one to see Basuli and Tarzan rip each others’ limbs out for his sake because he is a respectable warrior who would never manipulate anybody and has something called standards. Basuli and Tarzan may have their fangs, claws, and muscles prepared for carnage against each other, but the whole battle for winning Hercules’s heart seems relatively futile in the long run because, as I stated before, he is not a manipulative tease. Once Basuli and Tarzan spring to action with their fangs and claws unleashed as if though they were lions on the prowl, Hercules would be strong enough to stop the both of them from wanting to kill each other with their bare hands, sharp claws, and razor-like fangs. As Hercules is no pushover, he would sternly remind both Basuli and Tarzan that he is not to be treated like a possession that both of them covet, for he is an individual with his own feelings and his own thoughts. Furthermore, he would reprimand both Basuli and Tarzan for their uncalled for behaviour and make them realise that he is not worth killing for. He loves them both because they are special in their own ways, and he would blame himself if ever Basuli and Tarzan dare kill each other because of him. Hercules is not always one to give grave ultimatums, but the one he has in store for Basuli and Tarzan is, if they choose to continue to perceive Hercules as their prize to be won, he would not be afraid to just walk out on them. Knowing the error of their ways, Basuli and Tarzan apologise to each other, hug and make up, and apologise to Hercules for treating him like their coveted prize. In return, Hercules forgives both Basuli and Tarzan and reminds them that sometimes love can make them do foolish things. At least Hercules has the magnanimity to make peace for the duration, with Basuli and Tarzan implementing that said peace. They would even reach a truce that Basuli can have his romantic moments with Hercules every Monday, Wednesday, and Friday. Tarzan would have him ever Tuesday, Thursday, and Saturday. Sunday is when both Basuli and Tarzan can make sweet love to Hercules and have shared romantic outings with him. Hercules would agree on their plan, and it shall be set in stone for the duration.

It might seem entertaining to see two wild jungle warrior brothers like Basuli and Tarzan fight as if though they were powerful big cats such as lions, tigers, and/or leopards. However, it is neither fun nor amusing to see them want to viscerally attack each other over one man they both love. Just ask Hercules. He could expound how difficult it can be to have two powerful jungle warrior brothers fall for him and do everything they can to acquire his love. In fact, Hercules loves both Basuli and Tarzan, so, he is neither worth coveting nor being used as a trophy. At least Hercules has given them a sobering reminder that, if Basuli and Tarzan choose to fight over him again, he would leave them alone until they are ready to think about what they have done and realise that their pursuit was but a folly. It also proves that in this relationship revolving around two jungle warrior brothers in love with a demigod, Hercules is the one who truly wears the pants in this three-way relationship.

I hope you all enjoyed this, and I will see you in the next submission. Take care, stay safe, and keep on showing your love for Basuli x Hercules x Tarzan, everybody. 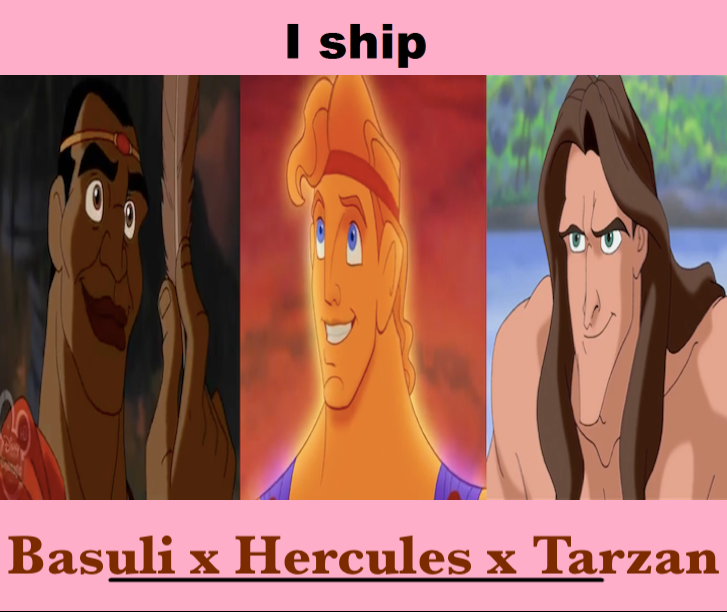