This “Hercules Tells Character to Shut Up” meme originally belongs to adamhatson and is dedicated to those who enjoy Muviro’s seething hatred as well as Hercules’s unconditional love, loyalty, and dedication to Basuli and Tarzan. Hence, this mainly revolves around Hercules’s intense rivalry with Muviro with some hints of OT3 goodness in the form of Basuli x Hercules x Tarzan or Basculeszan. Sit back, relax, and please appreciate how fiercely protective Hercules is to his sweetly beloved husbands Basuli and Tarzan against a treacherous bully like Muviro.

Muviro has always boasted about wanting to crush and strangle Basuli and Tarzan to smithereens with his bare hands, thus breaking their bones with his sheer strength, considering that they have been his hated rivals since childhood. Sure, Basuli may have been his hated rival when it came to him being the first-born son of Chief Keewazi, thus being first in line for succession, but Muviro’s rivalry with Tarzan transcends bullying and mutates into seething hatred against Chief Keewazi’s second-born son, as he lusts to not only outmuscle Chief Keewazi’s younger son but also see him destroyed inside and outside due to how different Tarzan was compared to the rest of the Waziri tribe. Fortunately for Tarzan, this is not going to happen because he has the unconditional familial love of his father Chief Keewazi, of his older brothers George of the Jungle and Basuli, and of his younger brother Maugli, Lest we forget about the romantic love of his husband Kocoum, his brother-in-law Namontack, and, most of all, Basuli’s and Tarzan’s lover/husband/protector Hercules. Hercules would never allow anybody to hurt Basuli and Tarzan, let alone either of them, because he would drop everything he is doing and guard them with all of his might, power, and life. This is also attributed to Zeus and Chief Keewazi witnessing how their sons have grown from rambunctiously impetuous youths to formidably strong men, especially since the two Waziri brothers and the Greek demigod started out as best friends in childhood, found themselves becoming a lot closer in their teen years to the point where both Basuli and Tarzan ended up engaged to Hercules, and Hercules ended up being involved in a polyamorous then polygamous relationship with not only Basuli and Tarzan but also Namontack, Kocoum, George of the Jungle, and Maugli. Although Basuli and Tarzan have as much agency as their own people as well as brothers, Hercules fully acknowledges it because he has seen the best and the worst in both of them without holding back nor flinching and would always love them with all of his heart. Therefore, Muviro attempting to off Basuli and Tarzan would be a terrible mistake, for he will suffer under Hercules’s furious fists, radical wrestling moves, and complete combat prowess, which would see Hercules throw Muviro to the ground like a rag doll.

Muviro and Hercules may be super strong warriors with incomparable combat prowess, but the one attribute that sets them apart is their character. While Muviro is all about selfishness, greed, and the lust for power, Hercules is magnanimity, courage, and self-sacrifice incarnate. Basuli and Tarzan, especially the latter, may be strong enough to stop Muviro from killing the both of them, but Hercules would deliver nearly fatal blows to Muviro that will knock him cold. Their different characters are also evident when it comes to their skills as powerful combatants. Martial artists, wrestlers, and those who partake in combat sports would be aware that self-defence is not about bragging about one’s strength to their opponents nor exuding excessive pride at one’s combat skills but the undying will to protect those who are oppressed, shield those who are in need, find balance in all walks of life, and engage in combat only when the situation is threatening, not just going headfirst into battle without even thinking about the ramifications. Muviro may be a mighty warrior with the strength of ten-thousand men, combat skills that a pro-wrestler would envy, and an iron will that screams determination and fierceness; but he is selfish, treacherous, ruthless, and xenophobic towards outsiders. Hercules, on the other hand, exudes kindness, compassion, and amicability towards his friends, his family, and his loved ones and only uses his super strength whenever danger is afoot. Considering how Hercules loves Basuli and Tarzan body and soul, it would be no surprise that he would go out of his way to protect both of them from harm. Whenever Muviro dares to kill Basuli with his bare hands, Hercules would beat Muviro up and sternly remind him that Basuli truly cares for his tribe, his father, and his younger brother and is far more fit to be the Waziri tribe’s chief than Muviro ever could. Whenever Muviro says something viscerally hateful to Tarzan, Hercules would call Muviro out on his intolerance towards Tarzan and express his unrelenting disgust at him for being so needlessly cruel to someone as kind, loving, loyal, and genuine as Tarzan. Muviro would never stand a chance against Hercules because the former does not have the same unconditional love the latter has for Basuli and Tarzan. Hercules would never want to see Basuli and Tarzan hurt, let alone abandon them, and to see someone want to destroy them would make his blood boil like a billion suns to the point where somebody like Muviro would not live to breathe another breath.

Hercules calling out Muviro’s lust for Basuli’s and Tarzan’s demise shows how fiercely loyal and unconditionally loving he is to his husbands. Behind Hercules’s warrior fierceness directed towards Muviro as he beats him until he is bruised and bloodied all over is a beautifully loyal soul who would never leave Basuli and Tarzan by the wayside. Any harm done to Basuli, Tarzan, and their family is also harm done against Hercules.

I hope you all enjoyed this, and I will see you in the next submission. Take care, stay safe, and please do not be so hateful like Muviro but keep on spreading the love for Basuli x Hercules x Tarzan, everybody.

Hercules from Hercules belongs to Disney.

Muviro from The Legend of Tarzan belongs to Disney and Edgar Rice Burroughs. 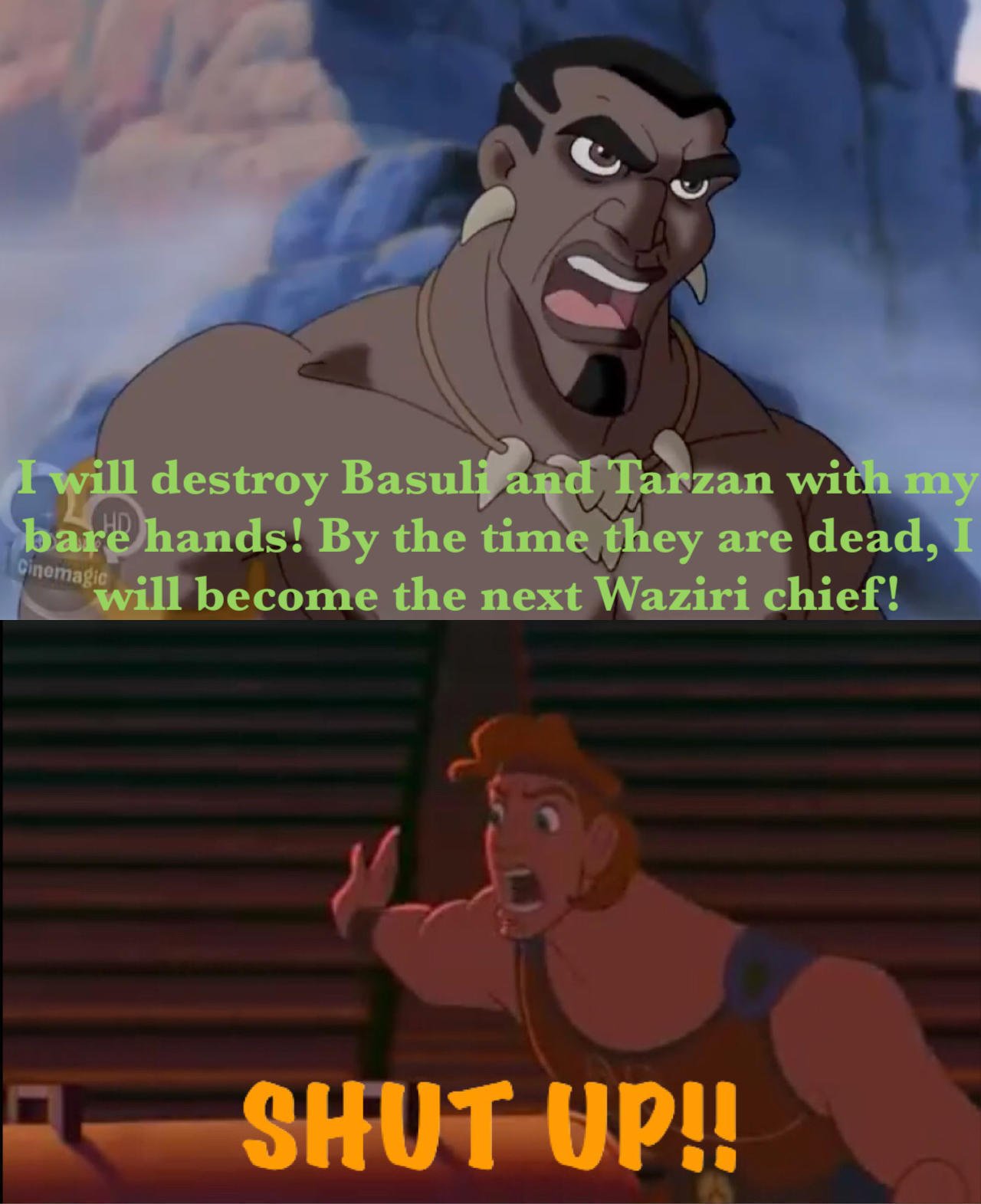