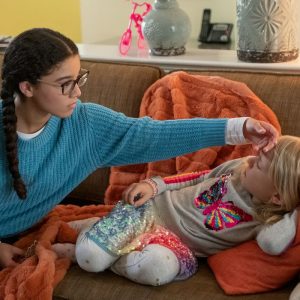 The people in charge of Texas are being shitheads right now and there is no way to get around that nor is there any way to get around the fact that Greg Abbott is a monster that needs to be ousted ASAP.  Anyone that has been following the news that Abbott wants to stop Gender Affirming Care for Trans youth and wants to take trans children away from their families because, in his twisted mind,  trans children being who they truly are is a form of abuse.   The state has started investigating families with trans children as a way of saying these families are criminals.

The Baby-Sitters Club is a series of books written by Ann M. Martin about a group of girls that take on various babysitting jobs.  The fourth book in the series, Mary Anne Saves The Day deals with the titular Mary Anne having to take her charge, a young Jenny to the hospital because of a high fever. 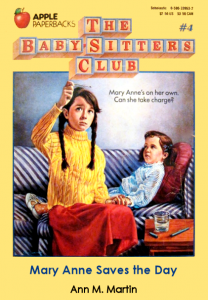 I will admit that I have not read the original book yet, I have only read the graphic novel adaption and seen this episode. 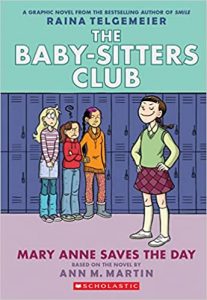 I did not become a fan of The BSC until I watched season one of the now-canceled Netflix series and this episode from the first season has stuck with me.  The story from the original source is very much the same except for a change that is rather significant as the young girl that Mary Anne babysits in this episode is trans.  I know some may not think much of this but that is important and speaks to one of the core themes of the BSC, inclusivity.   Welcoming everyone no matter who they have always been at the heart of this series and this episode perfectly highlights this.

There are a few scenes where Mary Anne is shown with her young charge, Bailey and she is just having fun with her like when the two girls are having a tea party. 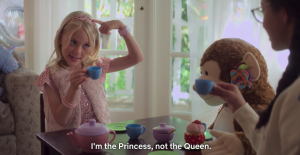 Bailey is a precious young girl that just wants to be a kid and this is perhaps best highlighted when Mary Anne is trying to find an outfit for Bailey to change into and her closet is full of boys’ clothes.  Bailey just says those are her old clothes.  One of the biggest elements that adds an air of authenticity to this role is that Bailey is played by trans child actor and (sadly) activist, Kai Shappley.

I say sadly because when season one dropped, Netflix had a trans author do a whole thread on this episode and how important it is to be an ally. Sadly, some people decided to quote tweet that thread and say you shouldn’t babysit a child with a mental illness.   Okay,  there is nothing wrong with caring for someone that has a mental illness, and being trans is not one.

Being trans should be a personal or social identity, not a psychiatric one.

Numerous tweets are attacking the young girl, both character and actor just for being trans.  Including one, I saw that said seeing a trans girl caused a grown woman to vomit up her lunch. Oh, just grow up.  Sadly,  Kai is still growing through this in real life as I’ve seen numerous tweets misgender her or say that her mother has brainwashed her into being a girl.   When she has made clear time and again, that she is a girl and has always known that she was a girl.

This is something that is also brought up in the episode and explained in a way that is made easier to understand for the intended audience.  While hanging out with her new friend, Dawn,  Dawn breaks it out by saying in the same way Mary Anne has always known what hand she writes with, it’s the same for Bailey in knowing that she has always been a girl.

The way that Dawn explains this so easily speaks to something that I wish more people would understand, be accepting of people for who they are.  This does align with Mary Anne’s story in that she is trying to figure out who she is.  I still struggle with that too.

When the fever comes, Mary Anne tries to make all the right calls before finally calling 911 and when she takes Bailey to the hospital, the doctor and nurse keep misgendering Bailey because they are looking at her charts. They use he/him pronouns and boy terms like champ and sport when talking about Bailey.  Mary Anne sees how her charge is being mistreated and calmly asks to speak to the doctor and nurse outside and ask that they look at Bailey for who she is and not what her chart says.

This moment is important as it speaks to how the trans youth will always need allies to speak for them when they can’t speak for themselves.   That doesn’t mean speaking over them, fair from it as it is important to listen to them and hear what they have to say.

I feel as though this episode is very important in showing the normalization of trans people in life. It is a bit sad to say that even has to be normalized but this is the society we live in.   I was inspired to write this blog after seeing a speech from Kai Shappley speaking out against what is happening in Texas and she asked if you a writer, write.  That is what I’m hoping to accomplish as it’s sad to see a young girl such as her has to fight just to be accepted as she is.  I’ll admit that I haven’t always been perfect on this front when it comes to sticking up for my trans friends but I do try to and I do apologize to any that might be reading if this isn’t good enough.  I just felt inspired to write this because what is happening in Texas is breaking my heart.   Depending on how well this is received,  I might do other blogs about LGBTQ TV as I am slightly interested in talking about the character of Dreamer from Supergirl.

2 thoughts on “A Special Blog: Mary Anne Saves The Day and why Trans Youth need Help.”