This I Ship Meme originally belongs to adamhatson and is dedicated to all of the wonderful Zuko x Katara or Zutara shippers, partisans, and loyalists of the world. Sit back, relax, and cherish Zutara’s undeniable beauty, synergy, golden heart, and brilliance.

My undying love, appreciation, and admiration for Zutara knows no bounds. Ever since I first started watching Avatar: The Last Airbender in absolute earnest as a 13-year-old seventh grader, I knew from the back of my mind that Zuko and Katara not only looked great together but also had some potential for them to grow as a couple, despite what the canon dished out for them at the very end. By the time I was approaching high school as a 14-year-old, I got myself immersed in a multitude of Zutara fan art and fan fiction to the point where I considered myself an admirer of this particular pairing. Back then as a teenager, I used to love it because there was passion and beauty between the Fire Nation Prince first seeking to have his honour restored then be on a journey towards his redemption and the Water Tribe Warrior Girl who is the embodiment of solidarity, strength in numbers, and perseverance. Now, as an adult, and thanks to watching multiple videos from Joshua Fagan, Sneezy Reviews, and a litany of online reviewers who specialise in producing discourses focusing on Avatar: The Last Airbender, I can fully appreciate Zutara as a pairing that actually makes more narrative sense than ever before because of how they define balance, compassion, and the willingness to see each other as fellow human beings, not just elemental benders.

Zuko and Katara would have no illusions of who they are on the outside and on the inside, for they can challenge each others’ notions and perceptions, while revealing something about themselves that they did not even realise. They might have started off as rivals, let alone enemies, but they could not be any more different from each other. Both of them lost their mothers during the Fire Nation’s abuse of their power towards other nations, although Zuko’s mother is still alive but Katara’a mother was killed by one of the Fire Nation’s soldiers. Season 2 might have seen Zuko turn over a new leaf after the Siege of the Northern Water Tribe, given that he has spent this particular duration as a wanderer throughout the Earth Kingdom and realised what damage the Fire Nation wrought on the people, but, in “The Crossroads of Destiny”, he ended up making a huge mistake by relapsing to his old ways, although he started to realise that it was futile capturing Aang in order to please his abusive tyrant of a father. Therefore, he betrayed his uncle/surrogate father, Katara, his supposedly new allies, and, worst of all, himself. Continuing on to Season 3, Zuko is seen finally realising that he has made a mistake and managed to do what he can to redeem himself because he realised that the Fire Nation’s supposed prestige was nothing more than an empty shell. In order to atone for his error, he finally confronts his father, leaves the Fire Nation, and joins forces with Sokka, Aang, Toph, Katara, and eventually Suki in a series of “field trips”.

In Katara’s side of the story, she might have commenced the show as a passionate, kind, and loving idealist. However, her encounter with Hama when it came to acquiring blood-bending as well as her seething displeasure of seeing Zuko again, due to the fact that she always saw him as the face of the Fire Nation because of her mother’s tragic fate, signified a different much darker side to Katara that was about to emerge. One that was full of vengeance, anguish, and pain which Zuko firmly acknowledged, especially in “The Southern Raiders”. What Katara needed was closure to finally confront her mother’s murderer, and Zuko knew who was responsible for committing such an atrocity. Katara’s dark side came into full swing when she blood-bent a Fire Nation guard until she found the man who killed her mother, Yon Rha. As soon as they arrive to Yon Rha’s residence, Katara was about to kill him by manipulating the rain to be turned into icicles. However, she realised that Yon Rha was nothing more than a pathetic, sad, undignified man. Although never forgave Yon Rha for what he did, she was ready to forgive Zuko. Therefore, Zuko did care for Katara about what she thought, was not afraid of her less than sunny side, and acknowledged her as a fellow human being.

The rest of the episodes demonstrated that the animosity that befell Zuko and Katara dissipated, and they can now fight side by side, thus showing how much they understand each other and how deep and meaningful their relationship could be. No where is this additionally evident when Zuko and Katara faced off against his younger sister Azula in the tragic yet powerful Final Agni Kai. Where Zuko had Katara by his side, Azula had nobody because of how she felt that everybody around her was treacherous when, in fact, she was never taught how to accept compassion and unconditional love as strengths. Zuko even sacrificed his own life for Katara when Azula pulled a dirty trick by redirecting Azula’s lightning that was initially meant for Katara and taking it in. He may have been severely injured in the process, but, after Katara subdued Azula, she managed to help Zuko recover. Sure, this moment could have easily ironed out their relationship and bring it to the next level when it came to romance, but it demonstrated that there is nobody in this planet that Zuko and Katara could put their trust in than each other.

I would like to think that Zuko and Katara being in a romantic relationship together would signify not only the importance of balance, synergy, and harmony, but also the values of compassion, understanding, healing, and acknowledging each other as humans; strengths, weaknesses, warts, and all. Both of them have seen the best and the worst in each other, and they would never give up on each other. In fact, Katara’s resilience and strong will could also be an asset to bringing peace to the Fire Nation after many years, let alone centuries, worth of animosity. Sure, the Fire Nation would be skeptical about having somebody from the Water Tribe be the new Fire Lady, but Katara would prove them wrong every single time by utilising her quick wit, her people skills, and her awareness of what she has seen in all the different nations. Even Zuko would remind the councillors, politicians, and the like that Katara saved his life, is just as important as a leader, and that her father is also nobility, so they need to treat her with more respect. Zuko and Katara even ended up being married at 17 and 15 years old respectively, thus acquiring the blessings of Hakoda, Grandmother Kanna, Pakku, and Uncle Iroh. Now with Zuko approaching 33 and Katara approaching 31, they are the proud parents of 15 going on 16-year-old triplet sons Seiji, Sanji, and Souji; 14 going on 15-year-old triplet sons Haku, Isoka, and Jiro; 13-year-old twin daughters Izumi and Ikuni; 12-year-old twin daughters Sara and Mara; and 11-year-old twin daughters Kya and Kana. All of their children are capable benders, with Seiji, Sanji, Souji, Izumi, and Ikuni mastering firebending; Haku, Isoka, Jiro, Sara, and Mara mastering both water- and firebending; and Kya and Kana being full-fledged waterbenders. Aside from their skills with fire and water, they are also compassionate souls who will never abandon anybody.

Zuko and Katara have come a long way in their romantic relationship. Their love for each other is unconditional, and they will always support each other in times of joy and in times of strife.

I hope you all enjoyed this, and I will see you in the next submission. Take care, stay safe, and keep on showing your love for Zutara, everybody. 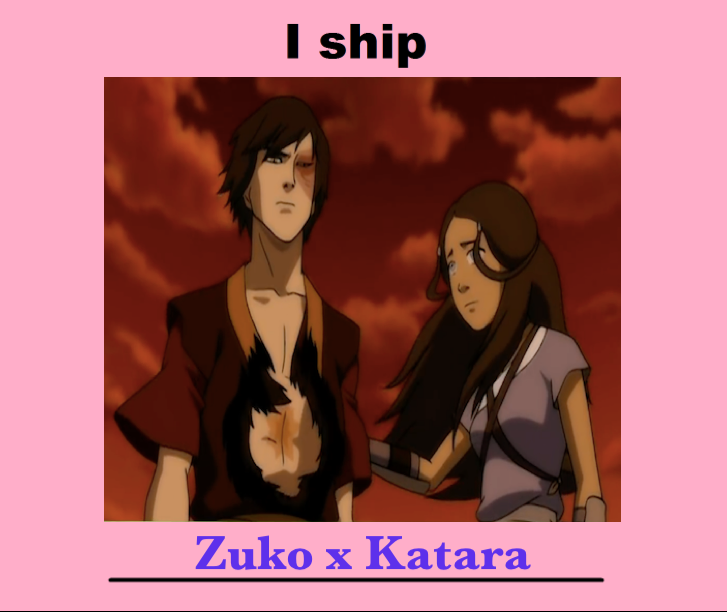