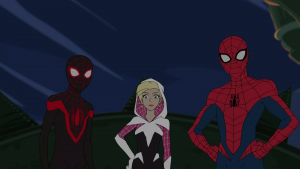 Spider-Man (2017)  is not bad in itself but there are times when I was watching it for this event that it felt there were too many Spiders.  On the one hand, I do get it but at the same time, it’s a bit annoying.  Now, this first arc that we are looking for the Ghost-Spider event is titled Spider-Island and from what I learned from a friend is based on a 2011 storyline.  That is interesting as considering Gwen had not yet debuted as a hero.  From what I’ve seen online,  the basic beats of the storyline are there. 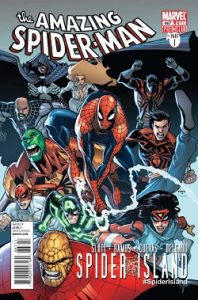 Overall, this arc itself isn’t bad but it did not need to be five episodes long.  With that, I will give you plot details but again it’ll be in more broad strokes. Once again like the previous post,  while I will bring up the other characters where necessary but the focus will remain on Gwen.

Now unlike what we saw with Ultimate Spider-Man yesterday, so many of the characters had already been established and this is something that I had noticed when I originally watched this show before falling off,  it truly heightens the science aspect of Peter’s personality and that is also true of the characters as so many of the action takes place at Horizon High. 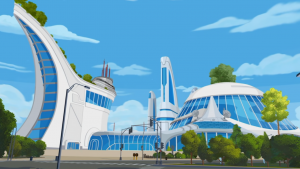 This also applies to Gwen, which is sure fine as there is a version of Gwen that Ghost-Spider has come across that was a scientist, and she was also The Green Goblin.  (Which is a lot weirder now that I’ve typed it out) 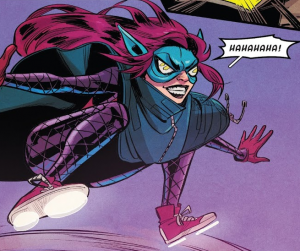 Yeah, that’s a whole thing.  But my point stands, I don’t have an issue with the characters being smart but it can seem a bit annoying at times how many of them there are.  At the same time, I do like how the characters had been established as that does help to add weight to what happens during this arc.  Now, let’s move onto the arc but as stated, this’ll be more of a broad-strokes thing.

As has been brought up before, the whole idea of this arc is everyone develops spider-powers and by everyone, I mean…

Now, it turns out that this happened because of an experiment caused by Spider-Man baddie, The Jackal after everyone had been exposed to an experiment of his in an episode before this arc.  At first,  this seems to work out for everyone as we see in the second episode when a bunch of New Yorkers comes by and help, Gwen, Peter, and Black Widow to take down Crossbones.  In many ways, it reminds me of this classic moment from Spider-Man 2.

Moments such as this and the aforementioned scene of the New Yorkers coming to help the heroes during this arc speaks to something so important to the character of Spidey.  He is a symbol of hope for the city no matter what JJ may say and when push comes to shove, New York, will have his back.  Now as I mentioned things do go from good to bad.  You recall that I mentioned The Jackal right, well Norman Osborne also has a part in this thanks to The Jackal as you see in the first episode of this arc, our Spidey team fight Spider-Man’s stealth suit as it had been taken over.  What they don’t realize is that it was Norman and he has become a Spider Monster and that is what’s happening to everyone that obtained Spider powers.  As you can see. 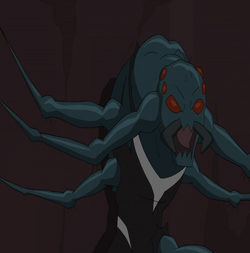 I’ll be honest and say that I kinda had weird feelings about seeing my favorite superhero as a monster but I realized that comes with the territory.  So you know it’s something that happens and as I mentioned this is also where Norman comes in as he was the first one to be mutated into a Spider Monster and to say that this puts a strain on Harry and Peter’s relationship is something of an understatement.  Harry hates Spider-Man and Peter does come clean. This is something interesting when looking at Peter and what it’s like being Spider-Man, so many pieces of media such as Spider-Man 2 and the recently released No Way Home show much being Spider-Man is on his life.  I mean consider how this iconic scene was recreated in the Raimi trilogy. 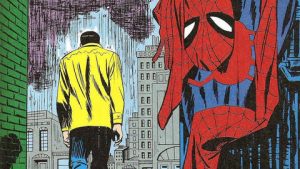 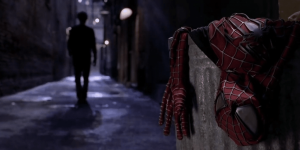 I bring this up because if you noticed the Header image I used Gwen isn’t wearing a mask with her costume and I found/find that a little weird but it does serve an interesting story purpose to highlight the difference between Peter being Spider-Man and Gwen being a superhero,  she doesn’t see it as a burden and the fact that her face is exposed allows people to latch onto her and garner a fandom that greatly adores her. Kinda reminds me of how fast and popular the character became when she was first introduced in the comics.  It’s an interesting idea to show how embraced Gwen is and we will see a big polar opposite to this when we look at how Ghost-Spider is handled in Marvel Rising.

That’s for later on during this event though.  As I said though the Spider Powered people are soon turned into monsters and thanks to Gwen’s best friend Ayna, they can find a cure that reverses the monsters back into people. It takes everything they can to restore the population to what they were and this does lead to tensions mounting between Harry and Peter as Peter wants to save everyone while Harry understandably is focused on saving his father.

It does work out and The Jackal is robbed of his Spider Army and a lot of the population save one (Ayna) including Gwen loses their powers.  A bit sad but she’ll be back.

Let’s take a look at the characters here now. 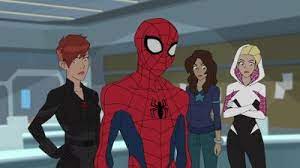 Daymond is rather likable as Spider-Man and Peter Parker.   You do get a sense that there is some influence from the MCU into how he was expected to play this role.  That’s not a bad thing and he doesn’t feel like a carbon copy of Tom Holland’s Spider-Man but it is noticeable.  One of the big things I brought up was how Gwen was loved and adored and the second episode of this arc shows how Peter deals with that and not well as he’s a bit jealous. Gwen suggests that it might be because of his costume.  She’s one to talk as in the comic I’m reading right now, her costume is made of spiders. 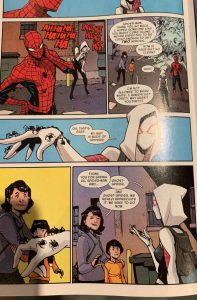 Yeah, that’s going to take some getting used to. 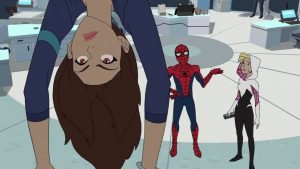 This is my first time seeing any piece of media with Ayna and I liked her and hope to see more of her in the future.  I may go back and watch this show in full so that I get to know these characters better. The relationship she has with Gwen is established as being truly important and I was able to buy into that quite well. 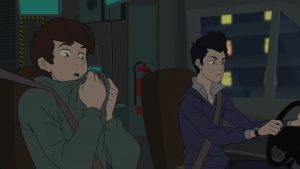 When I got done watching this at first, I thought Harry was being whiny and that is such a wrong way to look at his character.  Just as being Spider-Man is a burden for Peter,  it’s also seen how many bridges it has burned with his friends including his best friend.  It shows how much conflict there is for Peter and how hard his friends who the Webhead come down on Spidey’s supposed allies are.

Laura Bailey as Gwen is good, not my favorite take on the character but she did have quite a tenure as the character.  Watching her in this arc was nice as sometimes it’s just nice to see a superhero enjoying being a superhero.  Yes, it does come with a price but she got better.

The Jackal voiced by John Dimaggio 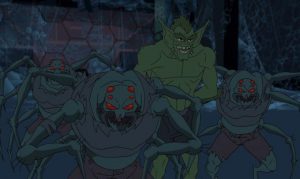 I’m not sure if this was brought up in the episodes I watched but apparently, this guy is Gwen’s uncle.  I have to be honest and say that he’s not a bad villain but he didn’t leave a big impression on me. He’s alright but nothing too memorable.

This arc was quite good and a good place to come in to get to know these characters. It was easy to pick up on things as they went along. I will admit that I don’t think this arc needed to be five episodes though.  Still, it was enjoyable.  We aren’t quite with the 2017 series as we look at how Gwen gets her powers back in… 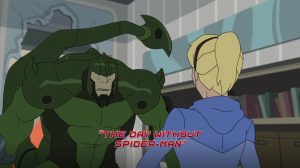 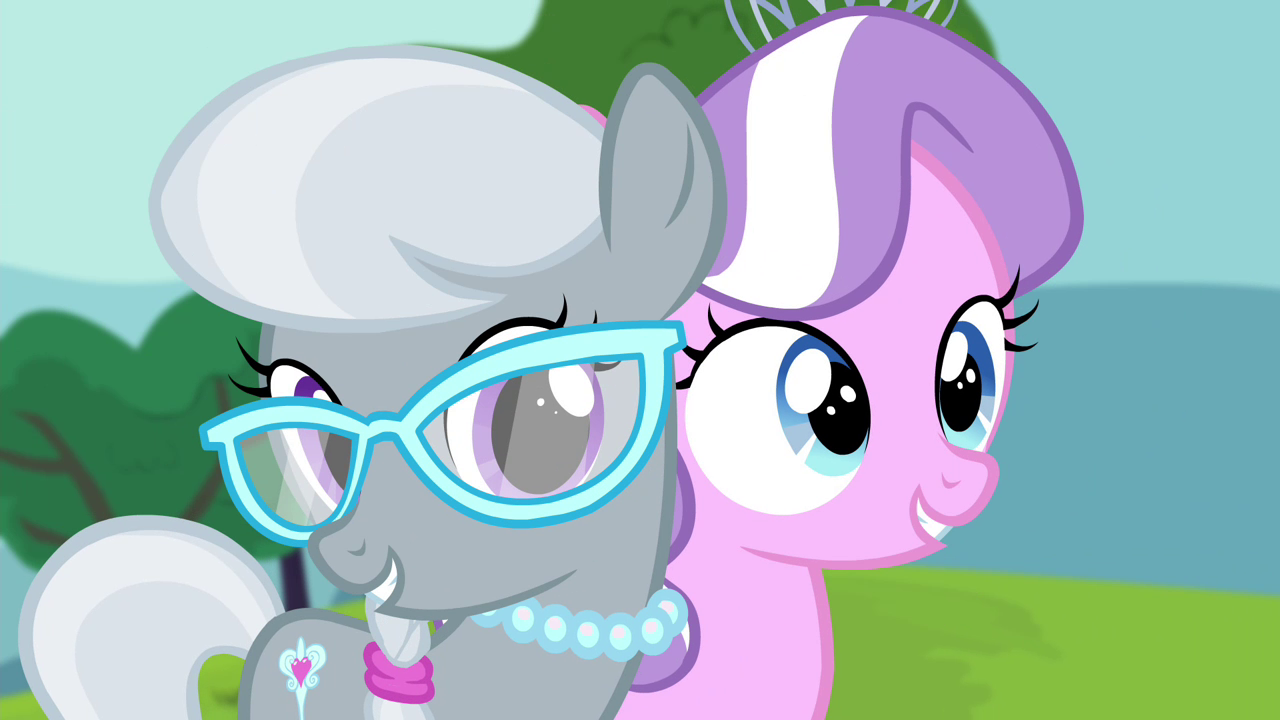