Holidays at The Loud House: A Loud House Christmas 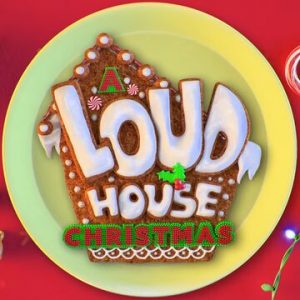 Live-action adaptions are a fickle beast and I must admit that I wasn’t too excited when I learned that Nickelodeon was working on a live-action adaption of The Loud House.  Were my fears justified? I don’t know but I do think there was no need for this film to be done in this fashion as it could have been perfectly told in animated form.  Having said that, this being live-action isn’t my biggest issue.  Rather,  the story is rather unpleasant.  As we’ve established, Lincoln can be selfish as we have seen with Season’s Cheatings but this movie takes it to an extreme and in the end, makes Lincoln come across as unlikable.   I tweeted this out after watching the movie for a second time but animated Lincoln while having selfish tendencies ultimately cares about his family whereas live-action Lincoln comes across as whiny and I’m sorry but he does some stuff that I’d find hard to forgive.  Three large examples come to mind that made me not like this Lincoln.

I won’t be doing a full scene-by-scene breakdown but rather give you the gist and why I don’t really like this movie but I wanted to. But before we get to that, I do want to give props to both the casting and how this movie brought Royal Woods to life.  It’s perfect and I do think the movie does a good job of bringing the audience into the world.  But that is about where my praise stops.  The plot is a bit basic and heightens Lincoln’s selfishness to unbelievable levels.   Everyone in the family has different plans for the holiday and Lincoln can’t accept that.  So, he decides to hatch a plan to keep everyone at home.  And this is where things get a bit gross in my opinion.   Okay,  so for the first part of his plan he decides to take some recordings of Mick Swagger to trick Luna into staying home because she was invited by Sam to go skiing with the family.  All that’s nice and yeah, Lun’s is excited but how does Sam handle her girlfriend choosing her idol over her.  She dumps Luna! 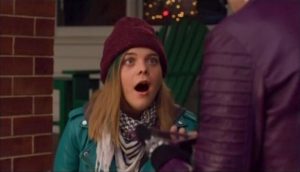 Movie, come here! I just wanna talk,  I’m a huge Saluna fan, they are my favorite animated couple behind Lumity and this is what you decide to do with them when they are brought into live-action for the first time and you barely give Sam any screentime.  At least, she got more airtime than Ronnie Anne (which was zilch).  I’m sorry but learning that Lincoln’s actions caused my favorite couple from this show to be torn apart left a very sour taste in my mouth.   There’s not a whole lot that the movie could do to win me back and even up to the point where Luna reveals that Sam broke up with her, it was skating on thin ice.   Now, there’s also what he did to Luan with the assistance of Clyde who helped him throughout all of this.  Luan was planning on doing a comedy show for the folks for the retirement home where Pop Pop lives but posing as senior citizens, Lincoln and Clyde prank everyone there and blame it on Luan promoting her show.  This causes everyone at the retirement home to agree to cancel the show and well how does Luan take the news.  Well, this is what she tells Lincoln.

Nice going Lincoln,  you almost caused a relationship to end between your sister and grandfather.  Oh yeah,  I know you feel bad but man, that goes too far.  And then lastly you got Leni fired from a job she loves. During the holiday season no less. Okay, so this going to take some explaining to do but The Louds are planning a trip to Miami, and once again with the aid of Clyde, Lincoln films a video of a creature that connected called a Sharkodile to make it look like it’s attacking the beaches of Miami. To do so,  they steal a mannequin that Leni has named Tonya and talk to during her shifts at the store she works at but because of  Lincoln and Clyde stealing Tonya, Leni loses her job because her boss told her she should’ve kept a better eye on it.

Movie, I’m sorry but you lost me.  I mean you had some good stuff including giving us Rip Hardcore as an actual character for a change that was nice and oh and seeing Brian Stepanek who voices Lynn Sr. play him in the movie was great and the music was on point but I expect that from this franchise. 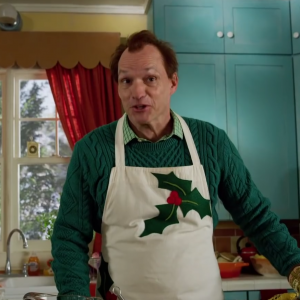 The way Lincoln hurt his family is what tanks this movie for me.  Yes, Season’s Cheatings was also about Linc being selfish and not thinking of others but he didn’t actively hurt anyone.  The fact that his actions nearly tanked two relationships bothers me.   Okay,  so we know this movie is set sometime after Lori went off to college and that is important as it means the fans can expect the developments that happened in the show’s universe also happened in the movie’s universe.  Let’s go back to Sam and Luna, they worked hard to get together and did a lot to get there.

So, either these events or something similar to them had to happen to bring Sam and Luna to being a couple, and seeing it all thrown away like that is heartbreaking.  Yes, Lincoln seeing this is meant to make him feel bad and realize that he messed up but as a fan of Sam and Luna, I hate the movie decided that for the first live-action appearance of one of Nick’s most prominent LGTBQ couples, Sam would barely appear and we would find she Luna offscreen. I hate that decision with every fiber of my being but if you were going to do it, at least have the kahunas to do it onscreen.

As I mentioned,  Lincoln does learn his lesson and you know what my biggest issue with this movie is besides everything I laid out, I still like the characters but hate the story they’re in.  The actors are perfect and they carry this movie but the story around them lets them down.  There’s a reason why Clyde’s actor in this movie is now the voice for Clyde in the movie.  It’s like I want to hate the characters because of how much I hate the story they’re in but I don’t.  It’s frustrating. As I mentioned, the movie is well cast for the most part as Bobby is just wrong.  That did not feel like Bobby at all in this movie.  With that out of the way, let’s take a look at the characters. 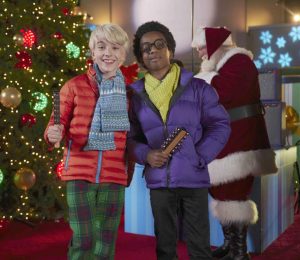 As much as I dislike Lincoln’s actions and think that he went too far,  it still felt like Lincoln and that was perfect.  Everything was down pat in accordance with who Lincoln is even if he does go too far and does tank aspects of the movie.

Now,  I won’t be focusing on the sisters as this is the second movie where they don’t get a lot to do but I get it as this is Lincoln’s story but again, the casting is impeccable for the sisters. 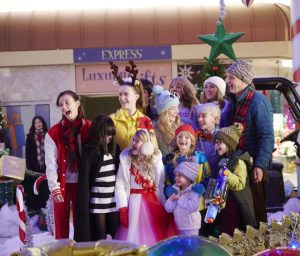 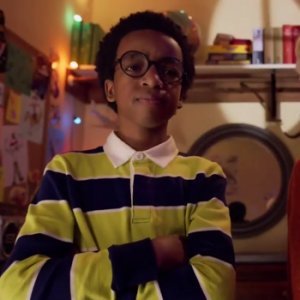 Clyde was probably one of the best characters in this movie as it truly felt like Clyde lept out of the cartoon into the real world.   Also, thank you for doing this movie post season one as I did not want to see the nosebleeds and I am so happy that’s mostly been erased.

Oh hey, another voice actor reprising her role from the show and this is the most that Katherine has ever gotten to do in a story.  Her character is mostly a side character that mostly just shows up to deliver the news here and there and true while that is what she does here, it feels more substantial than anything we’ve seen before and I like that.

The movie opens with a Christmas reworking of the theme song and you know what, it’s good.  It perfectly captures the chaos of the family and the holidays at the same time.   It’s always fun when shows or in this case,  movies do spins on their theme songs.

I do not remember this song well.  I mean I know it appeared in the background of the movie but it barely struck a chord (pun not intended)  It’s fine but nothing special.

Yet again another song I barely remember but hey Luna gets to sing and that makes it better and this is a great Christmas song.  The movie does have a better Christmas song that comes towards the end of the movie though.

Again, this song isn’t bad but nothing too special.  It’s alright but doesn’t leave me feeling much.

This song which Luna had been working on throughout the entire movie is perfect and easily the second-best Christmas song from her.   It’s just so much fun and just so great to end the movie with this song.   Now,  if you’ve seen the show’s first Christmas special, you know what the best Christmas song is And the movie’s cast did a video of them singing it.  That’s cute.

This movie frustrates me, I love the cast and how they bring the characters to life and I love how good Royal Woods looks but I don’t like the story that is used as a vehicle to drive the movie forward.  Again, I get that Lincoln can be selfish and we’ve seen that already but I feel like this movie takes it too far.  There are good things to balance it out to be sure but that is such a huge hurdle for me to overcome.  It stinks really as there is a good movie buried somewhere in here. Ah well.   Merry Christmas!

2 thoughts on “Holidays at The Loud House: A Loud House Christmas”