Olive the Other Reindeer – On the House Podcast 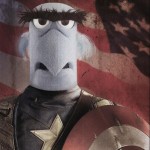 2 thoughts on “Olive the Other Reindeer – On the House Podcast”