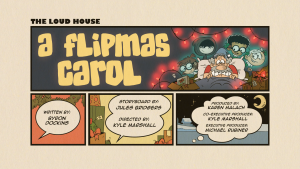 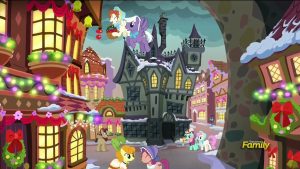 So, where does this one fall?  It’s not very good and part of the issue in my opinion comes from how truncated the story is.  I get what a lot of these episodic adaptions do to fit the story into their allotted time.   Like a lot of episodic takes including A Hearth’s Warming Tail, there is no Jacob Marley stand-in.  That’s a little annoying and I do think that could have worked with the character filling in the Scrooge role and it doesn’t even have to be a dead character considering the characters that were used for the ghost stand-ins.  They even have a character setup that would have been a good Marley stand-in. With that out the way, let’s take a look at this episode and see what it’s all about.

We open at Flip’s Food and Fuel and well, there’s issue number one.  The episode decided to focus on easily the most despised character in the show.  I have not meant a single fan that likes Flip.  Now instead of learning what Christmas,  he had to learn not to swindle everyone and that is the case with him. 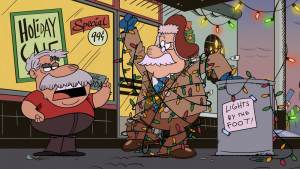 In theory, this isn’t a bad idea but I think with these episodes it helps if the character is likable.  Take, for example, A Keaton Christmas Carol.  Yes, Alex is a bit shrewd and only seems to care about money but Michael J. Fox can bring charisma to the character to make the audience like him and root for his change. 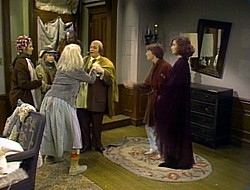 Whereas here every time we’ve seen Flip before now, there have not been any redeeming qualities to him as a character.  We see how much he takes advantage of people around his store and that even includes our Bob Cratchit stand-in, Lynn Loud, and what an odd choice to make her the Cratchit character but as she describes, it’s because of this.

Lynn: “Flip, I’m done with your ding-dang deliveries. Can I take this off? Tights are chafing.”
Flip: “Nope, you ain’t even close to paying off the damage you did.”
[Cut to the bathroom; a Lynn-shaped hole is present in the door]
Lynn: “But I told you, I was bursting and accidentally dropped the key in the nacho cheese vat.”
Flip: “Yeah, your bladder ain’t my problem. I need all these delivered.” [hands Lynn a stack of presents] “You gotta work tonight and tomorrow.”
Lynn: “What! Christmas Day? Major holiday foul, man!”

On the one hand,  it does work to explain why Lynn is working for Flip but considering Lynn Sr. was also in the store for a moment, I would have thought he’d have something to say about how his daughter was being created but nope.  All this leads to the first visit from our ghost, the Ghost of Christmas Past, and here Lisa Loud has taken on the role. 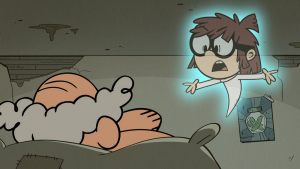 Heading back to Flip’s past, we see how Flip became the swindler he is and that is because when he was trying to get into a dance to be with a girl he likes, he was swindled himself by Scoots. 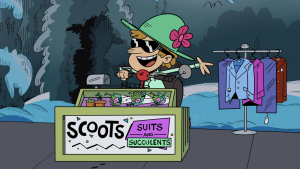 This is where my Marley idea comes in, sure Scoots is barely better but at least she’s fun.  My idea is simple,  have her be the Marley and tell Flip that she was wrong for how he treated him when he was a teenager.  True, you might have to rework the order but I still think it’s doable.  So after, this all-too-brief glimpse into Flip’s past, we get the Ghosts of Christmas Past as represented by Lincoln and Clyde. 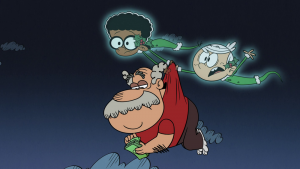 Honestly, this part is perhaps the most forgettable section even if there are some fun moments but nothing too memorable .  Our last ghost is of course Christmas Future and this is the most perfect casting choide to have Lucy Loud be this ghost. 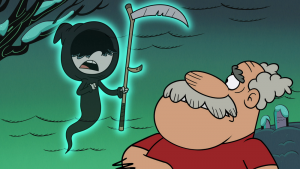 This is also where we learn how Flip died as they do with every Scrooge in a Christmas Carol adaption.  Although Flip seems to have the oddest death.

“Paying our respects to the recently departed. He was a troubled soul. Slipped on nacho cheese, a beef jerky stick wedged in his eardrum. He was found in a pool of his own Flippee syrup, alone.”

Before this, we see that he has also lost his business because people got tired of being swindled and Flip supposedly learns his lesson and goes to make everythign right to everyone he swindled.

I’m not going to focus on characters here because there is nothing to say about them in this short.

Well, I’ve seen worse takes on my favorite Christmas story but it’s not one I enjoy all that much. It’s not bad but I feel as though the truncated nature served this episode no favors.  Again, not bad but rather weak.  I would not reccomend  to anyone as it there are better episode adaptions of this story you can find out there.  Join me next time as we close out this Loud House Holiday Party as we look at… 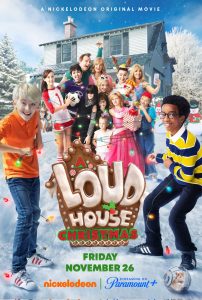