This piece of Shuran fan art with the completed dragon tutorial, given the dragons on the wall, hosted by the DeviantArt team is dedicated to LYNX3000, jog-my-memory, and Masayoshi220 who are celebrating their birthdays today. So, I wish you all a lot of love, joy, and prosperity in your lives as artists and as people. Furthermore, this is my entry for this year’s Red Ribbon Reviewers’ submissions as well as this year’s Inuvember submission. Now, here is Shuran in his jungle man glory ready to challenge anybody who dares cross paths with him.

Imagine entering the Temple of the Animal Gods deep in the African jungle. You enter one of the chambers. There are jade walls, floors of gold, and wall illustrations consisting of three gold dragons, two silver snakes, and two paw prints of a huge panther. As you tread through the chamber, a huge, hulking, powerful-looking 39-year-old man standing at over 6 feet 6 inches tall and donning a golden diadem on his head whose muscles are imposing, strength is formidable, and manner is more than tough. He snarls at you stating that you should never mess with him. He raises his arms, flexes his biceps, and unleashes an earth-shattering, blood-curdling, soul-shaking roar that can rival any gorilla, bear, lion, and tiger. In fact, just by looking at this jungle warrior, he could be strong enough to wrestle any gorilla, elephant, T-Rex, bear, and/or tiger. He is Shuran the bodyguard of the jungle, surrogate son of Toga the chief of the jungle, the most loyal vassal/friend/surrogate younger brother to Sesshoumaru, the most fiercely loyal surrogate older brother of Inuyasha, Hakkaku, Ginta, and the most protective older brother to Shunran. Normally, Shuran would don a leopard-skin neck gauntlet as well as golden gauntlets on his wrists and ankles. However, he is presented in his fearsomely fierce semi-nude glory with only a leopard-skin loincloth to show his sheer strength, ferocious fierceness, and magnificent size as a super strong, super intimidating, super protective jungle bodyguard who can never ever be knocked down.

Shuran’s super strength, magnificent muscles, boisterous brutishness, and ferocious fierceness towards every single intruder can never be questioned. Gato Mgungu’s Leopard Men would flee and scurry from Shuran because of his imposingly huge size and the powers he possesses by virtue of generating lightning from his body plus his massive punches, headlocks, back-breakers, neck-breakers, chokeholds, and earth-shattering smashes to the ground. Kerchak, Tublat, Terkoz, and Akut would be more than happy to have Shuran as their challenger, considering that these great male apes see him as their greatest opponent yet by virtue of his sheer strength. In fact, Shuran could easily hold them in a headlock as tight as a vice. Even the great African chiefs would be happy to have Shuran as their bodyguard, although he might end up rejecting their offers thanks to his unparalleled loyalty to his surrogate older brother Sesshoumaru and his surrogate younger siblings Inuyasha, Hakkaku, Ginta, Ayame, and Shunran.

Shuran’s duties as the jungle bodyguard entail demonstrating servitude, loyalty, protection, and reverence. His servitude, loyalty, and reverence to Sesshoumaru as the high priest display no shadow of doubt because of how effectively he carries out the tasks he is given to him. If it is offering enemies and demons to the sacrificial altar, Shuran would follow through with all of his being while excitedly staying tuned for the spectacle that is the execution. He would even help his best friend/surrogate younger brother/fellow vassal to Sesshoumaru carry out the necessary tasks and facilitate with whatever message needs to be carried out should he be weary. Aside from that, he would even help out organising very important events such as weddings and christenings at the temple, not just sacrifices. Given Shuran’s impeccably huge, muscular, imposing size, he is a very formidable warrior. He is especially an expert in wrestling, Pankration, boxing, weightlifting, and powerlifting. Therefore, he is the African jungle’s strongest and most formidable powerlifter and wrestler.

Shuran is a gregarious, powerful, and caring father of seven sons, 32-year-olds Kohaku and Shintaro, 31-year-old Taichi, 30-year-olds Souta and Shion, and 29-year-olds Bunza and Kokichi. All seven sons have grown up to be super strong warriors in their own special ways. Kohaku and Souta have grown up to be formidable gentlemen who can tackle any enemy with their own bare hands via wrestling, kickboxing, and/or boxing. Shintaro, Taichi, and Shion have grown up to be steadfast, strong, and sturdy warriors who always remain by their word. Bunza and Kokichi have grown up from rambunctiously inquisitive boys to courageous men who never want to give up. What Shuran has instilled on his sons are a sense of strength, courage, and perseverance to never have anybody knock them down. Therefore, Shuran is very proud to see his seven sons grow up to be the strongest warriors the whole jungle has ever witnessed.

Aside from being a loving single dad to his seven strong sons, Shuran has an equally loving, protective, and steadfast relationship with his surrogate older brother, surrogate younger brothers, surrogate younger sister, and biological youngest sister, thus putting his duty as a bodyguard to great use. When one looks beyond Shuran’s formidably fearsome manner, he is a very loyal soul to those he considers nearest and dearest to him. Although Shuran is a very loyal vassal to Sesshoumaru, he aspires to be as strong, mighty, and determined as him thanks to the great amount of respect he offers to him and how much Sesshoumaru can see a formidable warrior within Shuran, gaining his undefiled and unadulterated trust. Shuran also has a warm fraternal relationship with Hakkaku because of how tight they are as vassals to Sesshoumaru, colleagues in arms, and best friends for life. Both Shuran and Inuyasha have an extremely competitive relationship with each other because of the many occasions they test each others’ strength, stamina, and endurance. Shuran always sees Ginta as the little brother he has always wanted and will do whatever he can to protect him from all harm. As a matter of fact, Shuran enjoys wrestling, weightlifting, powerlifting, boxing, kickboxing, and practicing various martial arts with Sesshoumaru, Inuyasha, Hakkaku, and Ginta, thus growing stronger together as a formidable band of brothers. His fraternal relationship with his surrogate little sister, Ayame, and his biological little sister, Shunran, is just as warm, fuzzy, and lovable because of how valiant he is to them. Furthermore, when Shuran is not being a trepidation fighter who makes his opponents shake at the knees, he always greets his family with tight hugs galore, thus being such an appreciative, loving, and loyal soul towards them.

Shuran’s sheer strength and power as a warrior are unquestionable. Enemies may tremble before him, but he will always stay steadfast to his friends and family, thus channeling his physical strength into something productive and constructive.

I hope you all enjoyed this, and I will see you in the next Inuvember submission. Take care, stay safe, and always consider hiring a jungle bodyguard, especially if he is Shuran, everybody.

Shuran from Inuyasha belongs to Rumiko Takahashi and Sunrise. 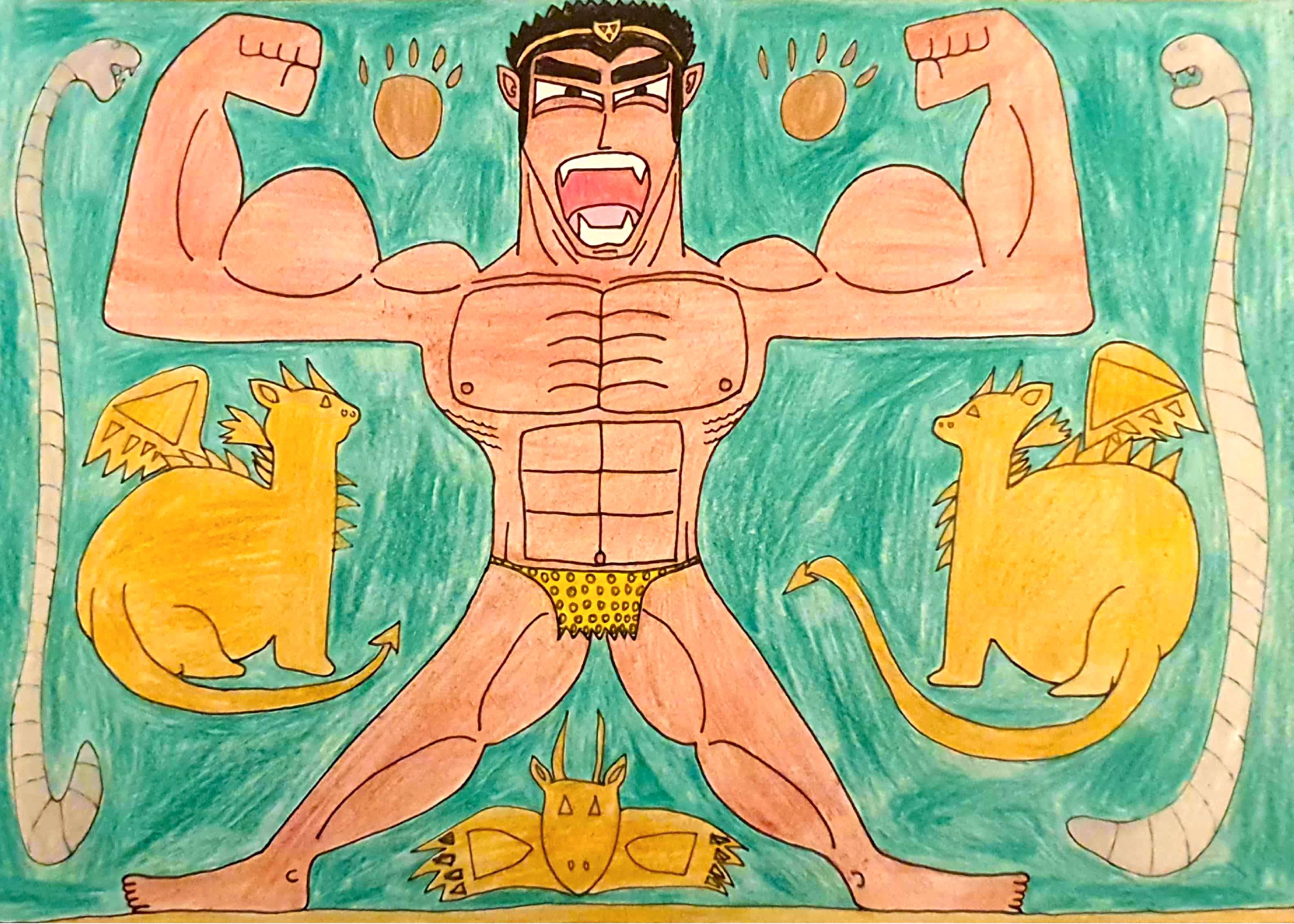