Fresh Prince of Bel Air’s Lou Smith, Avatar the Last Airbender’s Ozai, Samurai Jack’s Aku, Family Guy’s later seasons’ Peter Griffin, and a whole gaggle of deadbeat dads and abusive father figures have absolutely nothing on The Panther King when it comes to being a horrible father. Sure, The Panther King is far from a deadbeat dad, but he manipulated his own four biological children into gathering human sacrifice for a futile revenge plan against Toga the Dog General, Sesshoumaru, and Inuyasha only to temporarily destroy Shuran, Karan, and Shunran, thus acquiring their powers to be revived. At least he ended up being destroyed by Sesshoumaru’s Tenseiga and Inuyasha’s Tessaiga. I am certain that Cliff and Clair Huxtable, Philip and Vivian Banks, Carl and Harriett Winslow, and all the wonderful TV dads and moms would be shaking their heads in disapproval, fuming to high heaven for this atrocious father figure, and going on a rampage in terms of him nearly murdering three of his four children all because he wanted power to rule the world. Therefore, The Panther King garners the title of the worst father in the whole wide world because of what he has done to his own flesh and blood.

The Panther King is a clear example of demonstrating that blood is not always thicker than water, considering his atrocious misdeed towards his own children. I contend that what he has done is child abuse taken up to the max. Toran, Shuran, Karan, and Shunran never deserved him as a father, so who can ever be a better father than he could be? For that matter, who could also give The Panther Devas a better family life? Enter Toga the Dog General to be a much better father to those four panther yokai warriors than The Panther King could ever be, his wives InuKimi and Izayoi to be wonderful mother figures, The Wolf Elder to be a wise, loving grandfather, Sesshoumaru, Inuyasha, Hakkaku, and Ginta to be fine surrogate brothers to Shuran, Ayame to be a loyal surrogate sister to Shunran and be just as supportive to Toran and Karan also as their surrogate sister, with Ayumi being just as loving as a good friend to Toran and Karan. All Toran, Shuran, Karan, and Shunran ever learned from The Panther King was intimidation, ruthlessness, and oppression, which is not the way for these four sad souls should be going. In fact, with The Wolf Elder as their surrogate grandfather; Toga as their surrogate father; Sesshoumaru, Inuyasha, Hakkaku, and Ginta as their surrogate brothers; and Ayame as their surrogate sister, The Panther Devas can rest assured that their lives can change for the better away from The Panther King. His main strength is from their fear. Toga’s strength comes from compassion, firm authority, kindness towards his surrogate grandfather, loyalty towards his two wives, and ensuring that his children have good direction in life. Therefore, The Panther King has absolutely nothing to offer and is truly unfit to be a father, thus losing custody of the biological children he deigned to destroy.

Toran, Shuran, Karan, and Shunran definitely deserve a much better family than this horrid monster could ever offer. They need not worry, for they can sleep better at night, knowing that they have a surrogate grandfather to provide them wisdom, a surrogate father to be their rock, two surrogate mothers to be caring, affectionate, and always see the best in them, four surrogate brothers they can enjoy having around, and a surrogate sister who can fight for them.

I hope you all enjoyed this, and I will see you in the next Inuvember submission. Take care, stay safe, and please do not be an abusive father like The Panther King, everybody.

The Panther King from Inuyasha belongs to Rumiko Takahashi and Sunrise. 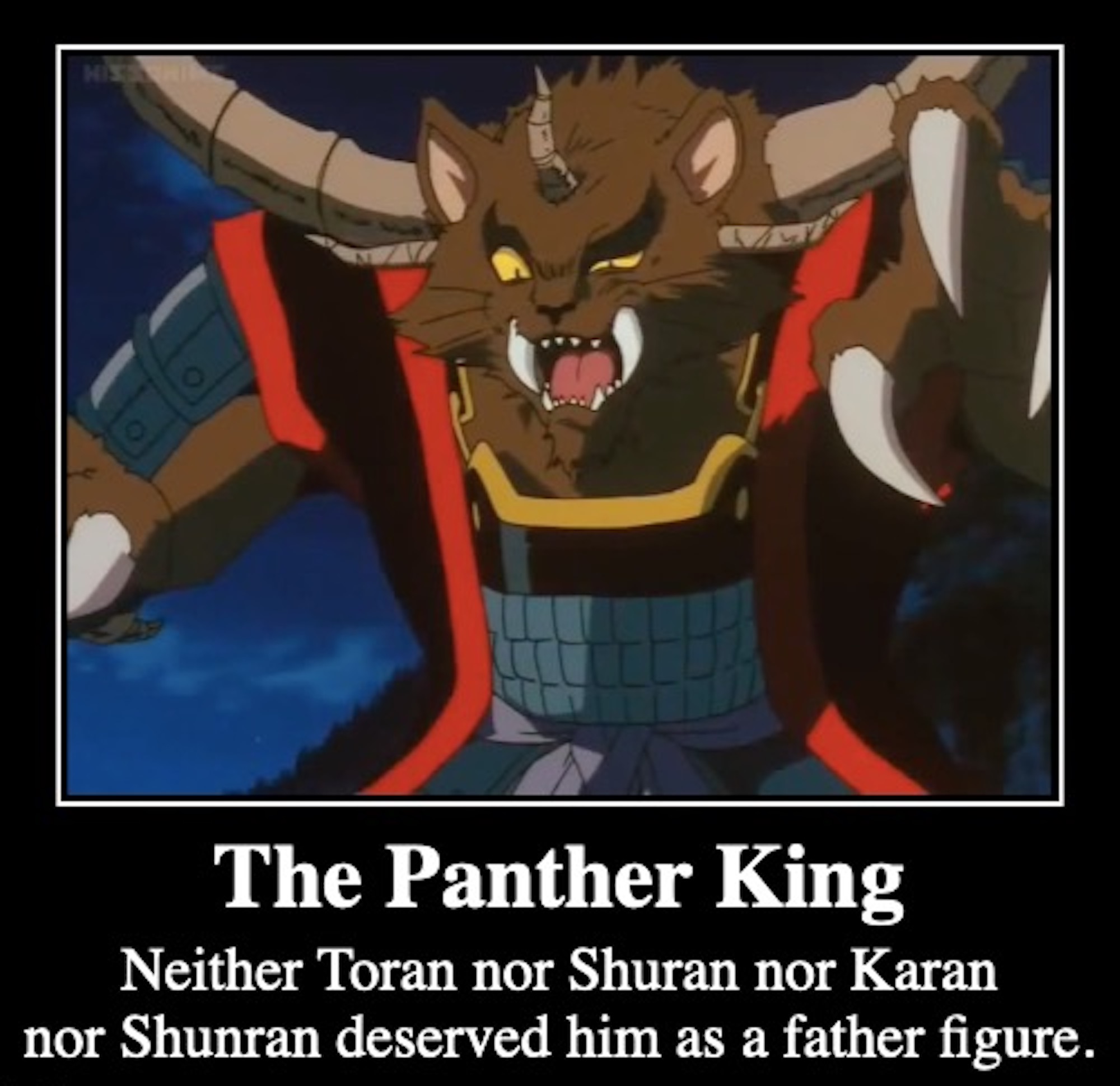