The Cosby Show’s Huxtables, The Fresh Prince of Bel-Air’s Banks, Family Matters’ Winslows, Diff’rent Strokes’ Drummonds, Roseanne’s Conners, 7th Heaven’s Camdens, Smart Guy’s Hendersons, Home Improvement’s Taylors, Malcolm’s family from Malcolm in the Middle, The Romanos from One Day at a Time, Sister Sister’s The Campbell-Landrys, Married with Children’s The Bundys, and many other television families from my childhood I could barely remember, not forgetting the amazing Geoffrey Butler also from The Fresh Prince of Bel-Air, plus The Wayans Family consisting of Howell, Elvira Altheia, and their actor progeny Dwayne, Keenen, Diedre, Damon, Kim, Elvira, Nadia, Devonne, Shawn, and Marlon as well as The Beardsleys from Yours, Mine, and Ours better tie some blue ribbons, put on some gold medals, attach some badges of honour, and award some trophies for this family because they are the mightiest, tightest, and grandest one that Japan has to offer. At the same time, these wonderful families from my childhood shall gladly assemble and salute The Wolf Elder for being such a wise, caring grandfather, Touga the Dog General, InuKimi the Dog Lady, and Lady Izayoi for being wonderful parents, Sesshoumaru, Shuran, Inuyasha, Hakkaku, and Ginta for being strong, valorous, dashing sons, Ayame and Shunran for being magnificent, kind, beautiful daughters, and Kohaku, Kai, Souta, Rin, Shiori, Kanna, and Shinta for being magnanimous, compassionate, unconditionally loving grandchildren. In fact, I would say that this family is going to stay strong for millennia.

The Wolf Elder may be Ayame’s grandfather, but I contend that he is the grandfather that Inuyasha needs in his life as well as the grandfather who can help Sesshoumaru see another side of himself that he has never had before, Shuran, Hakkaku, and Ginta grow from volatile young men to truly courageous men, and Shunran to find balance in her life. Even seven of his great-grandchildren would be happy to care for The Wolf Elder and be by his side all the time. Out of all his grandchildren and great-grandchildren, he has oneness with Inuyasha because of how much strength, resilience, and determination he has as a warrior and as an individual. Therefore, the unconditional love flowing between these two is unstoppable. Joe Banks, Hattie Banks, Russell Huxtable, Anna Huxtable, and Estelle “Mother” Winslow would be really happy to see this wolf grandfather be the best grandparent he can be, thus recognising how much of a great example he set for Touga the Dog General on how to be the rock of the family.

Being the family patriarch is no easy job for Touga the Dog General known in Japanese as Inu no Taisho, but what he has instilled on his sons and his five surrogate children is nothing short of phenomenal. Despite being a high-ranking general and a super strong warrior, Touga still finds time to raise his two biological sons, his three surrogate sons, and two surrogate daughters to be great individuals, be the steadfast husband to his two wives, be very caring towards his surrogate father The Wolf Elder, and be a lovingly affectionate grandfather to his grandchildren. Touga is not going to take any crap from anybody be they family, friend or foe, thus laying the principles of what needs to be done in the family. He is not going to allow anybody to hurt his wives, his kids, and/or his grandkids, for he is always going to be there for them. Something tells me that Dr. Cliff Huxtable, Philip “Uncle Phil” Banks, Geoffrey Butler, Carl Winslow, Ray Campbell, Al Bundy, Phillip Drummond, Ray Campbell, Floyd Henderson, Tim Taylor, Hal, Dan Conner, Reverend Eric Camden, and all the TV and movie dads are going to line up and greet Touga with a salute and loads of fanfare, thus greeting him with respect, decorum, and allegiance. In their minds, Touga has surpassed nearly all the TV and movie dads for how legendary he is.

InuKimi and Izayoi are queens who imbue beauty, class, sass, charm, intelligence, and wisdom as the matriarchs of the family. They prove that behind that behind every great warrior of a man is an intelligent, fierce woman with the world at her feet. Whether it is InuKimi’s brand of nobility, elegance, and decorum or Izayoi’s class, compassion, kindness, and sweetness, these mother hens know what is truly best for their two biological sons and their five surrogate children. These ladies have instilled a sense of chivalry, class, and understanding in Sesshoumaru, Shuran, Inuyasha, Hakkaku, and Ginta. In terms of Ayame and Shunran, independence, perseverance, and resilience are what they consider as their hallmarks. Even their granddaughters, specifically Rin, Shiori, and Kanna, would love to be as elegant as they are. Just because Touga wears the pants in the family does not mean that InuKimi and Izayoi have to remain docile housewives. In fact, they are far from docile housewives, considering how they are willing to lay the law, challenge gender roles, and be the fiercely intelligent queens that they are. Therefore, Clair Huxtable, Vivian “Aunt Viv” Banks, Viola “Vy” Smith, Harriette Bains Winslow, Rachel Baines Crawford, Lisa Landry, Ann Romano, Jill Taylor, and Annie Camden would love to applaud and honour InuKimi and Izayoi for their nobility, grace, and wisdom while adorning them with the finest silk and lovely blue ribbons. Furthermore, Lois and Peggy Bundy would even find themselves kneeling to the ground in awe of InuKimi’s and Izayoi’s external and internal beauty to the point where they look up to them as if they were goddesses. As for Roseanne Conner, she would give a nice congratulations to both InuKimi and Izayoi for being strong all the way through and not allowing Touga to walk on them.

It is not only Sesshoumaru and Inuyasha who are fortunate to have an awesome grandfather like The Wolf Elder, a brave father like Touga the Dog General, and two amazing mothers like InuKimi and Izayoi, but also three bodacious brothers from other mothers like Shuran, Hakkaku, and Ginta they can love, mess with in a positive way, and care for with every fibre of their being, one beautiful, strong, and vivacious admirer in Sesshoumaru’s case and wife in Inuyasha’s case, and a fabulously fun-loving little sister from another mister like Shunran. Together, Sesshoumaru, Shuran, Inuyasha, Hakkaku, Ginta, Ayame, and Shunran are seven amazing yokai warriors, loving children to Touga, InuKimi, and Izayoi, and appreciate grandchildren to The Wolf Elder, thus functioning as a unit based on fortitude and heaps of courage. Aside from Sesshoumaru and Ayame forming a nice, civil relationship as well as Inuyasha forming a romantic relationship with Ayame based on trust, compassion, and unconditional love, Shuran has a nice big brother bond with his little sister Shunran, Hakkaku admires Shunran for her charisma and charm, and, finally, Ginta loves Shunran body and soul for her unique sparkle, vivacity, and sweetness. When it comes to male and female bonding, the guys, i.e. Sesshoumaru, Shuran, Inuyasha, Hakkaku, and Ginta, have a rowdy, brotherly bond complete with dog piles galore, and the girls, i.e. Ayame and Shunran, have a warm, sisterly, adoring relationship complete with hugs to the nines. However, just because Ayame and Shunran are huggable does not mean that they cannot mess around and partake in Sesshoumaru’s, Shuran’s, Inuyasha’s, Hakkaku’s, and Ginta’s epic dog piles and roughhousing. Sesshoumaru’s lethal stealth, Shuran’s beastly brutishness, Inuyasha’s fierce strength, Hakkaku’s relentless resilience, Ginta’s stylish speed, Ayame’s superb stamina, and Shunran’s fabulous flexibility may seem different, especially when it comes to their varying personalities ranging from Sesshoumaru’s aloofness to Shunran’s bubbliness, but they are united through and through by strength, bravery, and persistence. No doubt that Elvin Tibideaux, Sondra, Martin Kendall, Denise, Theo, Vanessa, Rudy, Hilary, Will, Carlton, Ashley, Eddie, Laura, Judy, Richie, Tia, Tamera, Julie, Barbara, Darlene, Becky, DJ, Kelly, Bud, Matt, Simon, Mary, Lucy, Ruthie, Francis, Reese, Malcolm, Dewey, TJ, Marcus, Tasha, and all the TV and movie children would love to give their appreciation to Sesshoumaru, Inuyasha, Ayame, Shuran, Hakkaku, Ginta, and Shunran for their undying courage, thus honouring them to the nines.

Passing down the torch among the grandchildren are Kohaku, Kai, Souta, Rin, Shiori, Kanna, and Shinta. Where my headcanon is concerned, Kohaku and Souta are Shuran’s adoptive sons, Kai, Rin, Shiori, and Shinta are Sesshoumaru’s adoptive children, and Kanna is Hakkaku’s adoptive daughter, but they also have other children, with Shuran having five more sons, Sesshoumaru having three more children, and Shuran having six more daughters. Despite them being adopted, these seven have inherited Sesshoumaru’s stealth, Inuyasha’s strength, Ayame’s stamina, Shuran’s fierceness, Hakkaku’s valour, Ginta’s charm, and Shunran’s lovability, with Kohaku and Kanna bearing that stealth, Kai bearing that strength, fierceness, and stamina, Souta and Shiori bearing that valour, Rin bearing that lovability, and Shinta bearing that charm. Another attribute that was passed down is just how strong Sesshoumaru’s, Inuyasha’s, Ayame’s, Shuran’s, Hakkaku’s, Ginta’s, and Shunran’s bond really is, thus solidifying Kohaku’s, Kai’s, Souta’s, Rin’s, Shiori’s, Kanna’s, and Shinta’s bond as comrades, friends, and, most importantly, family. This even shows that Kohaku, Kai, and Souta have a tight brotherhood, Rin, Shiori, and Kanna have a sweet sisterhood, and Shinta is the apple of both the boys’ and the girls’ eyes because of his trademark cuteness. Together, their bond is never going to be broken, even if Kohaku and Rin as well as Souta and Kanna are happily married with children of their own, thus continuing the family line. In fact, Olivia, Winnie, Nelson, Claudia, Nicholas, and many of the littlest children as well as the grandchildren of TV and movie history are really proud of Kohaku, Kai, Souta, Rin, Shiori, Kanna, and Shinta because of how super tight their bond truly is.

Combining The Wolf Elder’s wisdom, Touga’s courage, InuKimi’s and Izayoi’s class, beauty, and grace, Sesshoumaru’s, Shuran’s, Inuyasha’s, Hakkaku’s, Ginta’s, Ayame’s, and Shunran’s strength, and Kohaku’s, Kai’s, Souta’s, Rin’s, Shiori’s, Kanna’s, and Shinta’s stamina are the great components needed to make this family truly stable. No demon, no foe, and no invader can ever stop them. Hence, they have managed to garner every ounce of respect from The Huxtables, The Banks, The Winslows, The Conners, The Bundys, The Taylors, and The Camdens. Together, they are truly an unbreakable, unbeatable, and exceptional family through and through.

I hope you all enjoyed this, and I will see you in the next Inuvember submission. Take care, stay safe, and never forget the importance of a strong family unit regardless of how old or how young you are, everybody. 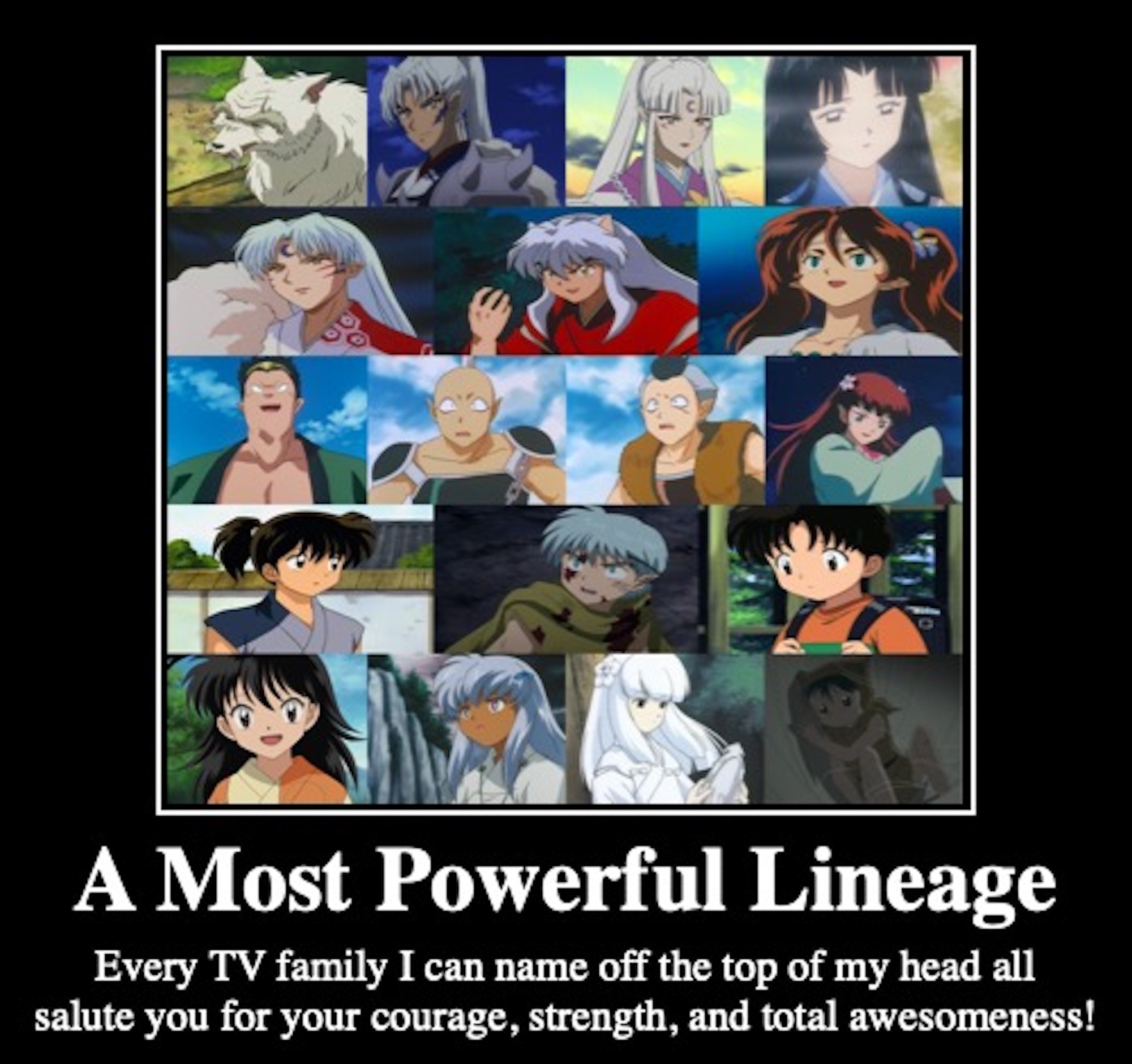