It is time for an unpopular opinion, which I am certain those of you who have been reading my content are really aware of right now. I never tuned into Inuyasha for the love triangles or the romance which tended to be eye-rolling at best and hair-pulling at worst. I was mostly invested in the volatile family drama Sesshoumaru and Inuyasha have found themselves in. We have two brothers who come from the same father. One who is born a full dog yokai. The other born a dog hanyou. They bear a lot of resentment towards each other and do their best to one-up each other in strength and skill complete with animosity galore. Nevertheless, their journeys bear similarity in which they grew as warriors and as individuals while begrudgingly respecting each other until the very end. Sesshoumaru and Inuyasha have, therefore, proven themselves to be warriors of fortitude, resilience, and sheer determination. Why do I proclaim this? Because, throughout my arduous odyssey viewing Inuyasha, Inuyasha: The Final Act, the four Inuyasha movies, and having some glances at Yashahime: Princess Half-Demon as well as browsing a multitude of fan art, fan fiction, and fan manifestos revolving around these two brothers, I always felt that they deserved to have better friends than the ones they have in the show. They deserve friends, let alone family members, who can make them realise that they will never be alone, they will always have their backs, and prove to them that, despite not being of the same blood they came from, they are family through good times and bad times, triumphs and tribulations, and all circumstances life has to throw at them every single time.

This begs the question. If a certain shrill shrew who abused the accursed Beads of Subjugation while being so puerile and her posse of three cannot be genuinely warm towards Inuyasha and Sesshoumaru is mostly aloof towards Rin, Jaken, Ah-Un, and, eventually, Kohaku yet actually forming a fine unit while risking his life especially for Rin in the much later seasons, who can step up and be the greatest people these two brothers will ever have in their lives? This is where Shuran, Hakkaku, Ginta, Ayame, and Shunran will gladly step in to form that super strong family Sesshoumaru and Inuyasha really need, thus building the foundations of trust, honesty, transparency, and finding common ground with each other to the point where they make an indubitably unbreakable bond. Therefore, Shuran, Hakkaku, and Ginta can be the brothers Sesshoumaru and Inuyasha can have while learning to learn and grow from each other, Ayame can be the loving admirer who can soften Sesshoumaru’s heart and the amazingly wholesome wife to Inuyasha in order to build a deeply profound sense of unadulterated trust, and Shunran can be the lovingly adorable surrogate little sister who will always tap in to Sesshoumaru’s and Inuyasha’s more protective, loyal sides while proving herself to be capable on her own terms.

Shuran, Hakkaku, and Ginta may be completely different beasts, considering that the former is the only brother of the Panther Devas and the latter two are wolf yokai warriors who do tend to be the jokers, but they could learn a thing or two from Sesshoumaru and Inuyasha while making them see that there is a whole lot more to their lives than just glory, strength, high ambition, and conquest. Sesshoumaru would form a respectable yet aloof brotherly bond with Shuran, Hakkaku, and Ginta, despite not always being receptive to their attempts at trying to lighten him up. In contrast, Inuyasha would easily warm up to Shuran, Hakkaku, and Ginta as his best friends, brothers, and great homeboys for life, with Sesshoumaru eventually warming up to complete this five-brother band. Shuran would be the big guy who is always going to euphorically greet Sesshoumaru and Inuyasha with his monster bear hugs, will always be there to protect them whenever they get badly hurt, and be surprisingly cuddly with his two favourite brothers for life. Hakkaku and Ginta can certainly learn a lot from Sesshoumaru and Inuyasha in terms of never backing down from a fight, thus implementing courage, hope, and a strong character to get the job done. Moreover, Sesshoumaru and Inuyasha would display fierce loyalty towards Hakkaku and Ginta, thus never reneging on their words unlike a certain big bluffing excuse of a wolf yokai warrior who was all talk and no action, but that is beside the point. Together, Sesshoumaru, Shuran, Inuyasha, Hakkaku, and Ginta would have a fantastic brotherhood rich in fortitude, solidarity, and keeping each others’ feet on the ground.

Ayame is the cement who keeps the entire family together and is really important in Sesshoumaru’s and Inuyasha’s lives. Her courage, unwillingness to take crap from anybody, compassion, unconditional love, and overall might are all worthy of the two brothers’ respect and allegiance in different yet vastly similar ways. With her strong personality, she would summon up the courage to cease and desist whatever squabble Sesshoumaru and Inuyasha have by reminding them that, at the end of the day, they are still brothers who ought to have each others’ backs. Her relationship with Sesshoumaru would commence with a crush, although it will not end up in marriage, but a firm bond based on respect, allegiance, and believing in each other in terms of their unparalleled strengths. Where Inuyasha and Ayame are concerned, they would have a romantic relationship which would last for many generations. She will always root for Inuyasha and will consider him to be her greatest champion. With Ayame’s dutiful relationship with Sesshoumaru and her intimately romantic relationship with Inuyasha, she is guaranteed to make a great impact in their lives, and not relegate herself to a certain big bluffing excuse of a wolf yokai warrior who was all talk and no action and who shall not be mentioned here. Therefore, Ayame’s strength, unconditional love, and boundless respect are the hallmarks in Sesshoumaru’s and Inuyasha’s lives.

Shunran is the lovable, inquisitive, wide-eyed, fun-loving, mischievous little sister Sesshoumaru and Inuyasha need in their lives. Despite her mischief, her penchant for creating illusions, and hyperactive feistiness, she would always demonstrate her unconditional sisterly love towards Sesshoumaru and Inuyasha to the point where she would learn a lot from them, such as never giving up on her dreams and always fighting the good fight. She would even prove herself to be just as crafty, mentally strong, and determined as a warrior and as an individual, thus garnering Sesshoumaru’s and Inuyasha’s respect. Furthermore, they would even be very supportive of both Ginta and Shunran thriving as a lovable romantic couple.

Sesshoumaru and Inuyasha are never ever going to be alone when they have Shuran, Hakkaku, and Ginta on their sides as their brothers for life, Ayame as the cement in their lives complete with all the unconditional love she can ever give them, and Shunran as their inquisitive yet very loving surrogate little sister. Therefore, Sesshoumaru and Inuyasha definitely have every reason to be grateful for Shuran, Hakkaku, Ginta, Ayame, and Shunran in their lives as people they can love, depend on, and be connected with on a genuinely profound level.

I hope you all enjoyed this, and I will see you in the next Inuvember submission. Take care, stay safe, and remember to keep showing your love for Sesshoumaru and Inuyasha while also resting assured that Shuran, Hakkaku, Ginta, Ayame, and Shunran are always going to be there for them as strong members of their family, everybody. 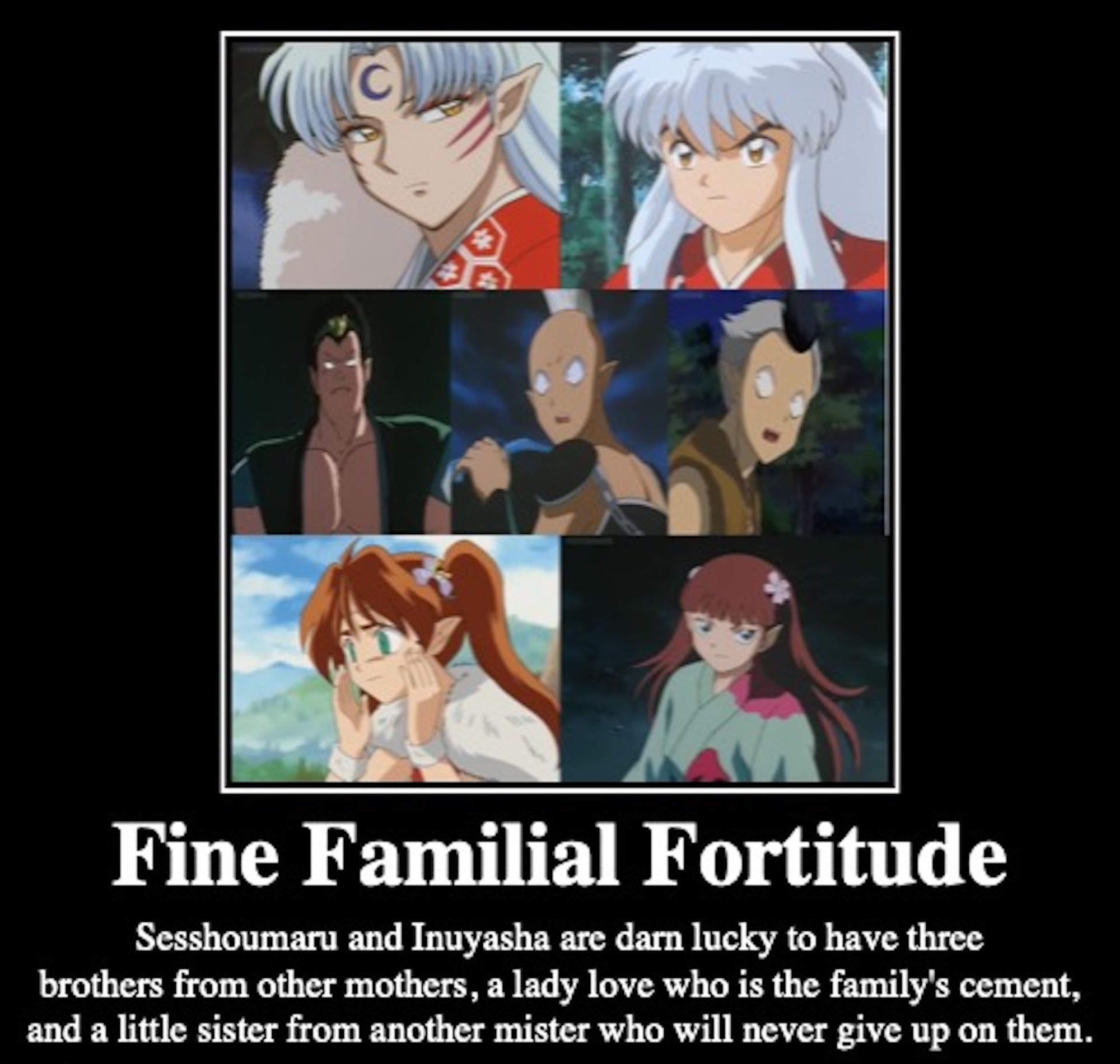