It’s Great to be in that Splendid Seven Family

I will say this once, and I will say this again. When you combine Sesshoumaru and Inuyasha being the strong dog yokai warrior brothers that they are with Hakkaku, Ginta, and Ayame being the courageous wolf yokai warrior siblings they can be and Shuran’s and Shunran’s super tight sibling bond as panther yokai warriors, you get a family who will stick by each others’ sides, never give up on each other, and constantly grow and learn from each other every single time. Their differences are what make Sesshoumaru, Inuyasha, Ayame, Shuran, Hakkaku, Ginta, and Shunran truly strong, thus forming this unbeatably unbreakable bond. If you want a definition of collective strength, you can definitely consult The Splendid Seven.

Sesshoumaru’s stealth, Inuyasha’s super strength, Ayame’s stamina, Shuran’s brutishness, Hakkaku’s endurance, Ginta’s speed, and Shunran’s flexibility can make their enemies heads’ spin to no end. Moreover, there are even occasions when these amazing yokai warriors can leave more than a gash and a bruise, but they can leave their enemies gashed, bruised, and running all the way home either to the grave or to whence they came from. Stopping these seven yokai warriors is an impossible task because of how they put their skills to phenomenal use as well as the hard work each and every one of them has been committed to. Therefore, there is no copping out and no giving up, for they tackle each and every challenge with a brave face.

Overlooking their amazing battle skills, Sesshoumaru, Inuyasha, Ayame, Shuran, Hakkaku, Ginta, and Shunran are still family through and through. Sesshoumaru and Inuyasha may not always know it, but they are really fortunate to have Ayame stick by their side, give them moral support, and believe in them with all of her heart, Shuran, Hakkaku, and Ginta as their greatest guy friends and bodacious brothers for life who can help them keep their feet planted to the ground as well as see the best in them, and Shunran as their surrogate youngest sister who can remind them that there is more to life than seeking for strength and power. Ayame would always put her trust in Sesshoumaru in an admirable fashion and in Inuyasha in a romantic, genuine, and untainted manner to the point where she feels safe with them, enjoy Shuran’s, Hakkaku’s, and Ginta’s brotherly warmth, and treasure the sisterhood she has with Shunran. Although Shuran is big, brutish, and intimidating on the outside, he is so welcoming, warm, and loving to Sesshoumaru, Inuyasha, Ayame, Hakkaku, Ginta, and his little sister Shunran to the point where he greets them with huge hugs galore. Hakkaku and Ginta are truly happy to have Sesshoumaru, Shuran, and Inuyasha as their big brothers from other mothers because they can confide in them without shame, while they are just as happy to have Ayame and Shunran as sisters from other misters. Finally, Shunran just loves to bask in the warmth of this family whether she attempts to cheer both Sesshoumaru and Inuyasha up, looks up to Shuran as her big brother for life, finds Hakkaku lovingly hilarious, loves Ginta body and soul, and aspires to be just as strong and courageous as Ayame. Together, Sesshoumaru, Shuran, Inuyasha, Hakkaku, Ginta, Ayame, and Shunran have a familial bond that would make even biological families green with envy.

It is one thing to perceive Sesshoumaru, Inuyasha, Ayame, Shuran, Hakkaku, Ginta, and Shunran as a septet of mighty yokai warriors who can kick all sorts of demon butt and emerge victorious. However, it is another thing to look beyond the guts and glory and see a family bonding together and realise that they have so much more in common than they actually think. Their familial bond will never be broken, for they stand together, make up one big family, and are a strong yokai kin by virtue of their

I hope you all enjoyed this, and I will see you in the next Inuvember submission. Take care, stay safe, and keep on spreading that Splendid Seven family love, everybody. 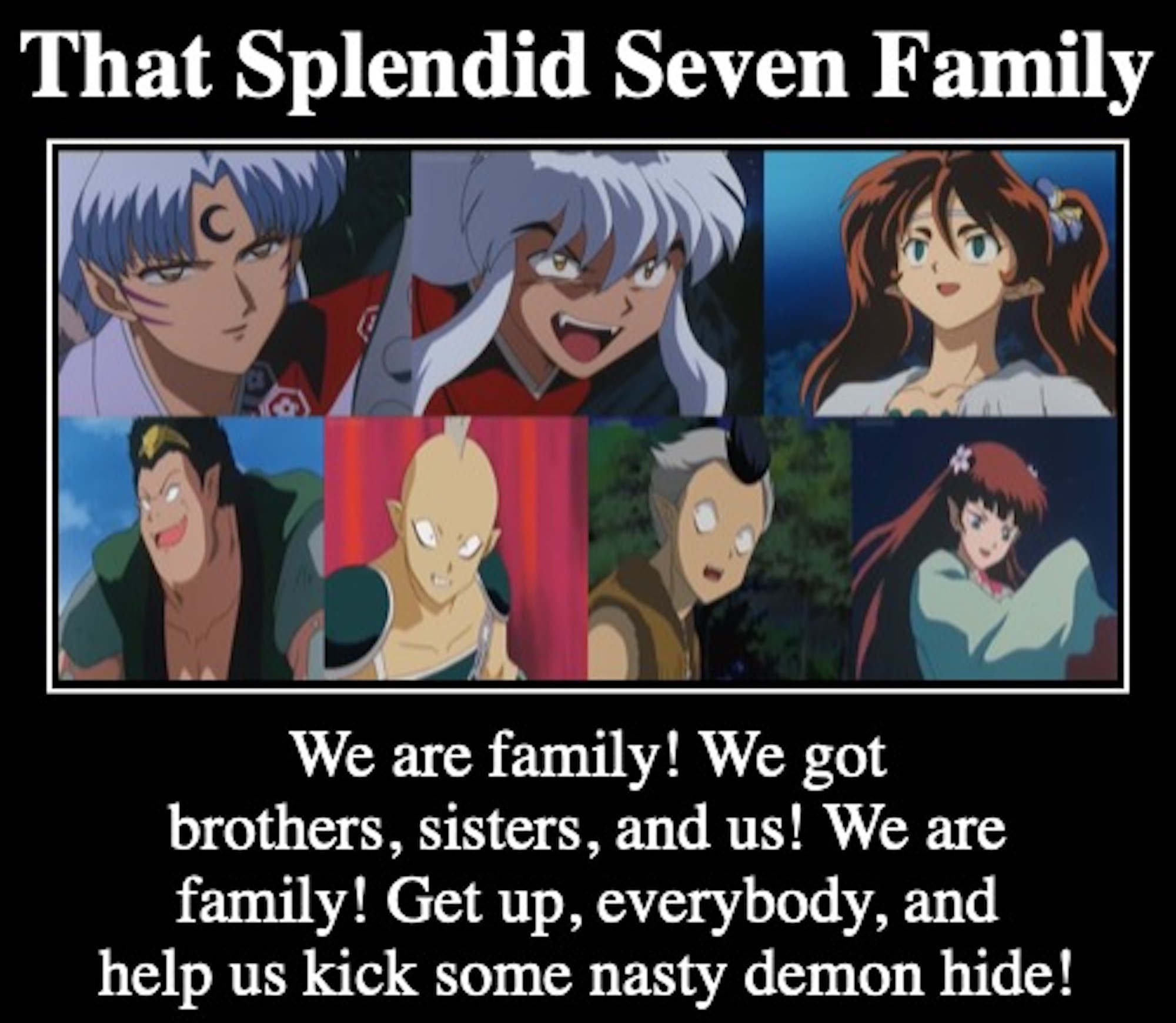