Kermit shows up in the nursery and Nanny has made ghost pancakes and Kermit doesn’t want to try them because they aren’t like the ones that his mom makes and he knows that he just won’t like them.  That’s when new character, Summer decides to tell a ghost story and that is all about getting Kermit to try something new.  It’s cute as the kids take on various Halloween personalities.

This episode hits on an element that you don’t see a lot with Kermit.  He can be quite stubborn and that is on display in spades here as his stubbornness gets the best of him and it isn’t until he stops being so stubborn that the ghost pancakes stop scaring the kids.

This song is alright and serves the episode well but it’s nothing too memorable.

This is a fun and cute episode that does something different with a Halloween episode.  If you have any young relatives,  these two episodes are great fun for them.  Join me next time as we close out this Muppet event with the biggest thing coming from The Muppets for the Halloween season. 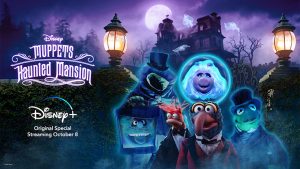