I know looking at this now as an adult that it looks like my old shame, as this was initially made for a project-based final exam I did for my high school’s information and communications or computer class exam where we had to create our own website. I had zero idea of drawing outlines, hands, and all of the fine details to the point where what I accomplished nowadays makes what I accomplished as a teenager a masterpiece by sheer comparison. However, when I was drawing this as a 17-year-old high-schooler, it did not matter one bit because I had a potent, profound, and deep love for Hey Arnold that knew no boundaries. As you can tell, this was how I envisioned my five favourite Hey Arnold couples in their twenties. With Hey Arnold approaching its 25th anniversary, I thought it would be nice to release the very first piece of fan art I drew when I was a teenager. During the show’s run on Nickelodeon throughout the 90s to the early 2000s, I did not really think about drawing fan art or writing fan fiction about Hey Arnold until I was in my teens. Now, I am happy that I have taken those as a teenager which I will never forget, despite my lack of confidence in uploading let alone publishing this piece of work on the internet.

For those who currently know my only piece of work revolving around my favourite Hey Arnold pairings, you might find yourselves thinking, “Hold it! I thought you mainly shipped Gerald with Rhonda. Who is that other red-haired girl?” I am glad you asked. That red-haired girl in the blue dress is Cecile who is Arnold’s French penpal from “Arnold’s Valentine”. When I initially saw this episode as a youngster, I was enamoured with the thought of Gerald and Cecile as a couple because I thought they were adorable together. That same sentiment stuck with me as a teenager. Nowadays, I think Gerald would be happier with Rhonda because they can continuously challenge each others’ notions, and Cecile would be happier with Lorenzo because they can surprise each other in very fabulous ways. Therefore, with that deliberation being set in motion, I shall stay a loyal Gerald x Rhonda and Lorenzo x Cecile partisan for the rest of my natural life.

This Hey Arnold couple fan art might be over 11 years old, but I will never forget the fond memories I had drawing the four couples I love to this day and one couple I used to love when I was a child but now like as a grown-up.

I hope you all enjoyed this, and I will see you in the next submission. Take care, stay safe, and keep on showing your love for Hey Arnold. 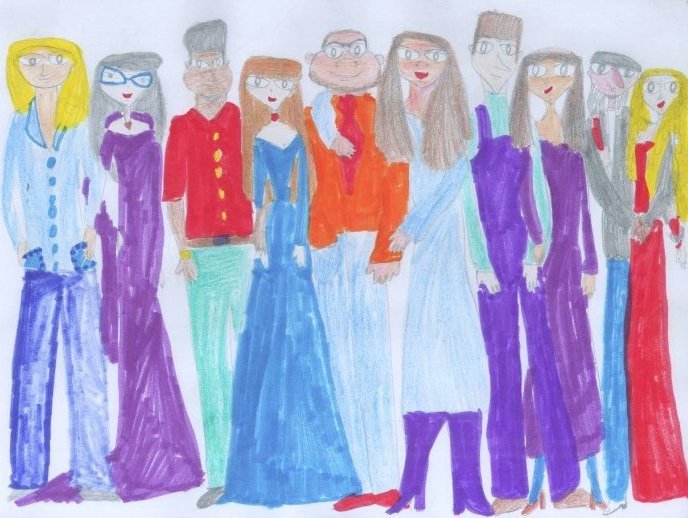