A Question of Duty and Love

This screenshot motivational poster is highly, utterly, and absolutely Pro-Sesshoumaru, Pro-Inuyasha, Pro-Ayame, Pro-SessAyaInu in the OT3 sense, Pro-SessAya in the loved pairing, and, of course, super Pro-InuAya in the OTP sense. Sit back, relax, and revel in this conjugal discourse as old as time between marriage based on family duty in Sesshoumaru’s and Ayame’s case and marriage based on unconditional love based on Inuyasha’s and Ayame’s case. I think you should already know which pairing I have been rooting for.

Throughout my tenure discussing Sesshoumaru and Inuyasha being in a romantic relationship with Ayame, I have come to the realisation that this idea would make a far better show than what I saw in canon, specifically in the manga and in the anime. It would be a lot more interesting witnessing Sesshoumaru go from super prideful to relatively awkward in certain social situations, especially when it comes to courting Ayame, Inuyasha never having those accursed Beads of Subjugation, being his own strong warrior, and not being involved in the perennial tug of war between his feelings for Kikyou and Kagome the dumbass in distress, who in turn abused her power over him, and Ayame be the strong, independent, powerful warrior princess she ought to be rather than be designated as a love interest to Kouga the cowardly Karma Houdini who is all talk and barely action. Therefore, I contend that Sesshoumaru and Inuyasha being noble suitors to Ayame would make for a very involving relationship constellation that enables the two dog yokai warrior nobleman brothers and the wolf yokai warrior princess to challenge each others’ preconceived notions and never settle for less. There is no doubt that both Sesshoumaru and Inuyasha are wonderfully ideal candidates for Ayame’s hand in marriage as well as equally suitable life partners to her, but how these two dog yokai brothers express their love towards Ayame cannot be any more different than it is, thus being a question of conjugal love based on respect and allegiance for the sake of political and familial unity or conjugal love based on compassion, loving each other unconditionally, and acknowledging each other for everything warts and all for the sake of being and living together in boundless harmony.

Sesshoumaru x Ayame: Familial Duty and Political Unity
Sesshoumaru and Ayame do seem to have a flawless relationship destined for success, given that he is a high-ranking Daiyokai and that she is a Northern Yoro warrior princess as well as the only girl in her tribe. Their unity would be based on uniting the Western Lands and the Northern Yoro Tribe to an agreement that Sesshoumaru shall be married to Ayame under the decree of Toga the Dog General and The Wolf Elder. Sesshoumaru would initially be hesitant to think about courting Ayame, while Ayame would initially be intimidated by Sesshoumaru’s coldness, but as soon as they are acquainted with each other, they would appreciate each other for who they are worth, specifically Sesshoumaru’s eloquence and decorum as well as Ayame’s intrepidness and valour. Sesshoumaru would eventually demonstrate how much of a gentleman he is towards Ayame by respecting her as an individual, acknowledging her capabilities as a fighter, and exude confident nobility to the nines. All of these traits would make Sesshoumaru quite the ideal husband to Ayame.

It is indubitable that the marriage festivities will be steeped with a lot of pomp and elegance, with Ayame dressed to the nines. She would even prove herself to be a most capable warrior, thus supporting him in every single battle they find themselves in, thus demonstrating how much of an asset she is to Sesshoumaru as his wife. As Sesshoumaru is a conscientious tactician and Ayame is a speedy brawler, their enemies would not be so fortunate to escape alive from their clutches. Furthermore, as Rin is Sesshoumaru’s daughter, Ayame would additionally bring in Kai and Shinta to be Rin’s brothers and would be a very nurturing mother towards her, thus solidifying the strong mother-daughter bond Ayame and Rin have. What strengthens Sesshoumaru’s and Ayame’s conjugal love is how much respect, allegiance, and decorum is there in their family because they can prove to each other that they are not all talk, but they also walk the walk in their collective lives.

While Ayame would feel secure with Sesshoumaru, demonstrate her undying fidelity to him and the children as wife and mother, and see the Western Lands and the Northern Yoro Tribe thrive in unity, there are a few drawbacks to their romantic relationship. Because Sesshoumaru is a high-ranking Daiyokai, this signifies reputation over authenticity. That is not to say that Ayame should rebel against this code, but there would be multiple occasions where she would have to behave in a certain way as to not receive either Sesshoumaru’s ire or stain his reputation. Romantic intimacy would be another issue because of how much time both Sesshoumaru and Ayame might have or might not have to consummate their feelings when the curtains are closed, which does contribute to the aristocratic rigidity to keep both Sesshoumaru and Ayame in line. This rigidity additionally may not bode well for Ayame because of how she wants to be more than just this high-ranking lady ruling alongside Sesshoumaru but be her own fighter and warrior. Sesshoumaru would indeed respect and capitulate Ayame’s sentiments, but duty is duty, and neither he nor she can change that, thus demonstrating the conditions set for Sesshoumaru and Ayame to romantically coexist. Despite these hurdles occurring in Sesshoumaru’s and Ayame’s romantic life, which may not always provide Ayame with a space to breathe and be her true self, their brand of romance would enable Sesshoumaru and Ayame to coexist as a strong familial unit ensuring that Kai, Rin, and Shinta grow in formidability, duty, and honour, demonstrate their undying fidelity for one another, display decorum in the court, towards the people they encounter, and their family, and coexist as a formidable duo willing to bring their enemies to their knees.

Inuyasha x Ayame: Unconditional Love above All Else
Inuyasha and Ayame would be the type of couple who will click exceedingly well, find so much common ground with each other, and stay strong for each other through thick and thin. Despite being the second-born son of Toga through Izayoi and the Dog Lady as well as being a hanyo, Inuyasha possesses superhuman strength, heaps of determination, and sufficient courage worthy of emulation, which are attributes Ayame would indubitably revere with all of her heart. In return, Inuyasha would admire Ayame for her courage, steadfastness, determination, and cunning, thus making her his equal as his long-term life partner. Because of Inuyasha’s brute strength and courage, Ayame would proudly proclaim him to her champion and her number one suitor worthy of her hand in marriage. Ayame’s sense of compassion, boundless kindness, and doubtless valour would provide Inuyasha space for him to be himself without hesitation and to be fiercely loyal to Ayame until they transcend the flesh. In addition, Inuyasha’s and Ayame’s unity would motivate Toga the Dog General and the Wolf Elder to consent to their loving relationship and would support their holy matrimony to the full.

Inuyasha and Ayame as a couple edges out Sesshoumaru and Ayame as a couple in the virtue of unadulterated authenticity which is the hallmark of their durable relationship. There is no rigidity found between Inuyasha and Ayame, only flexibility, strength, and diversity in how much they take care of each other, want the best from each other, and acknowledge each others’ strengths, weaknesses, and ugly sides without flinching. Furthermore, enemies better beware when Inuyasha’s strength and Ayame’s speed are combined, for they can become a formidable force to be reckoned with. Once Inuyasha’s and Ayame’s skirmishes are victoriously accomplished, they would have nights of hot passion complete with intense love-making and full-fledged consummation of their feelings. Overlooking their collective brute strength, Inuyasha and Ayame would be a couple whose honesty is just as potent as their skills as warriors, for there will be no skeletons in the closet whatsoever, and they will exude fierce loyalty to one another. Inuyasha and Ayame may define a power couple rife with muscles and motion, but their unconditional love for each other signifies trust, allegiance, fidelity, and keeping everything real through thick and thin.

Where Sesshoumaru’s feelings for Ayame are concerned, he would confirm that he still has positive sentiments towards Ayame because of how powerful and brave she is. However, he would be in the right frame of mind to know that Ayame would not be completely happy with him because of all the rigid rules she would have abide by at the expense of her own personal freedom and her own individual aspirations. Furthermore, Sesshoumaru would recognise the futility of producing an heir with Ayame solely for the sake of producing an heir where their conjugal relationship would have been deficient in passion and fire, despite the existence of respect and allegiance in their familial and political union. Acknowledging how Inuyasha and Ayame are towards each other in all of their unfiltered glory would motivate Sesshoumaru to respect Ayame’s wishes and give her the chance to live as freely as possible with Inuyasha. Therefore, Sesshoumaru would demonstrate a multitude of support towards Inuyasha and Ayame so long as they do not hurt, betray or maltreat each other.

Ayame would even admit that her feelings towards Sesshoumaru was first love which might not have held up well should their relationship have occurred in the long term. There is no doubt that Ayame admired Sesshoumaru for his nobility, elegance, courage, and determination, but she would even confess that her life with Sesshoumaru would not have been fulfilling with all of those rules and constant preening. She would still care for Kai, Rin, and Shinta, especially Rin because of how their mother-daughter relationship is strong, but she would feel more familial warmth with Inuyasha as his wife and mother to their children. At least Dai, Roku, Kai, Rin, Shiori, and Shinta can inherit the strong bond their parents have as siblings, given that they are happy to have two fathers and one mother who would raise them to be the best versions of themselves. Regardless, Ayame would still cherish how much Sesshoumaru is able to acknowledge her as an individual and bless her relationship with Inuyasha.

Conclusion
While I still have high spirits for Sesshoumaru and Ayame as a romantic couple, Inuyasha and Ayame as a romantic couple still wins in my eyes. The discourse between SessAya as conjugal love in the sense of duty versus InuAya as unconditional conjugal love remains as strong as ever, hence my eternal fascination regarding this topic. I would love to leave the forum open for you to let me know if you prefer either Sesshoumaru x Ayame and their sense of familial duty or Inuyasha x Ayame and their sense of unconditional love. It would be very interesting to hear what you think.

I hope you all enjoyed this discourse revolving around SessAya’s importance on familial duty and InuAya’s importance on indubitably unconditional love. Stay tuned for the next submission and keep on spreading love for SessAya, InuAya or both. 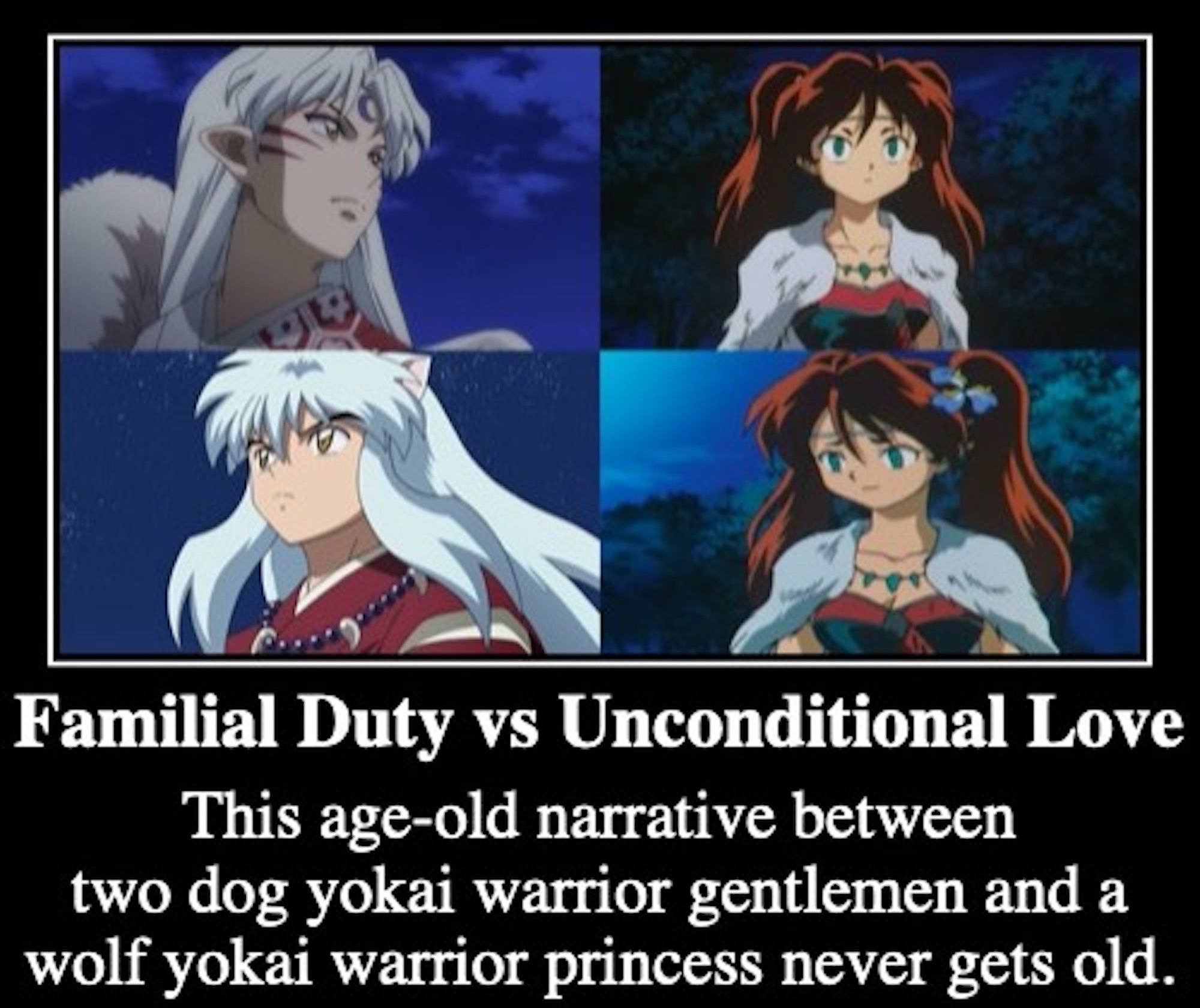 Four Steps to integrate Whatsapp API into your business