A Look at Disney’s LGTBQ Characters: The Characters of PIXAR

The first time I remember seeing something PIXAR related to the gay community is Woody showing up in an ad for It Gets Better.  As noted here,  it was a campaign against gay bullying.  And the straights weren’t happy with Woody appearing in the ad. 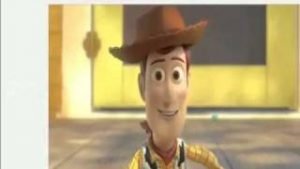 Not everyone was happy to see Woody participating in the ad, however. Alan Chambers of Exodus International (Remember Exodus International? The ministry that recently released and then lost an iPhone app that taught how to convert gay people to heterosexuality?) tells The Christian Post “he was surprised and disappointed that they would use a children’s character for the project.

However,  the people that this was meant to target seemed to enjoy his presence.  We are now a decade out from when that ad originally aired and how has PIXAR gotten since then.  Iffy to say the least.  Let’s start with that there was a supposed lesbian couple in Finding Dory  (my second favorite PIXAR film) 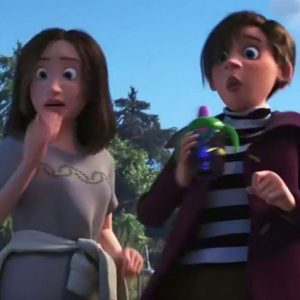 However, director Andrew Stanton would not confirm or deny their relationship. This is a bit frustrating but I do appreciate this answer.

“They can be whatever you want them to be,” said Stanton. “There’s no right or wrong answer.”

Stanton dodged the question but also said that the people that believed these characters to be a couple weren’t wrong.  Returning to the Toy Story franchise, Toy Story 4 did feature lesbian parents. 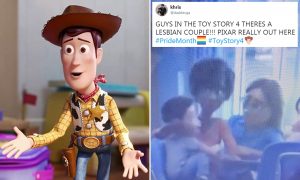 It’s a small scene, sure, and it’s certainly not the major representation that queer people have been waiting for, but it’s still important. This is one of the biggest movies of the year, after all, and will be seen by millions of all ages around the world.  Of course, once again,  straight parents wanted to boycott the movie over this one scene.  Which I think is a bit nut and also while these characters may seem like good first steps, they are the smallest of small steps as these characters are background characters that have no dialogue.

This takes us to last year when PIXAR gave us not one but two characters that identify as gay. One really good and in a beautiful short on Disney+ and the other is a cop. 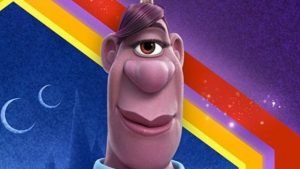 I will give the film this much credit in that Specter, I didn’t even know this character had a name is voiced by Lena Waithe, an out actor.  But again, she is a minimal character and her scene feels like the exclusively gay moment in the remake of Beauty and the Beast.  As The L.A. Times writes:

At a time when audiences are seeing increasingly meaningful queer representation in family-friendly TV shows, the tiny moments in Disney films are especially exasperating because they almost appear to be erasable by design.

As stated, it is one line that could be easily edited out of the movie in other countries:

“My girlfriend’s daughter got me pulling my hair out,” Specter says to commiserate over the difficulties of being a stepparent.

However,  there is another issue that I have with this character. This film came out in 2020 amidst the wake of the Black Lives Matter protests and the first character to have a line of dialogue that identifies her as gay is a cop. That doesn’t sit right with me. I understand that this movie was in production long before the protests happened.  Still, I wish this character wasn’t a cop. I don’t trust cops and I don’t think cops are good people.  For example, I believe that it is important to remember that cops have killed members of the LGBTQ community and that happened last year as well.

With LGBTQ Pride Month kicking off just as the city and the nation are convulsed with anger and protest over the Memorial Day police killing of George Floyd in Minneapolis, as many as 1,000 LGBTQ New Yorkers and allies gathered in Sheridan Square on June 1 to remember LGBTQ people of color lost to police violence, as well as other Black Americans who died at the hands of police.

Unfortunately, LGBTQ history and police brutality are intertwined.  One can go all the way back to the Stonewall Riots. 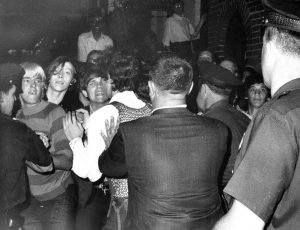 So, I’m sorry but this character being a cop leaves an icky feeling in my stomach.  I am not trying to say that the LGBTQ community has it worse than the Black community but rather cops mistreat people that aren’t one of their own.  However, in May of last year, we finally got a good story about a gay character from PIXAR and he was the main character.   This brings us to the short film, Out. 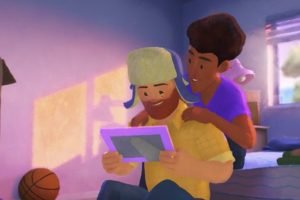 Out is a beautiful short that is part of the SparkShorts series from PIXAR on Disney+.  In this short, the lead character Greg is nervous about coming out to his parents.  This is something that so many people fear before they come out, will they be accepted or not.   There is some magical shenanigans here with a dog and cat that come down from a rainbow.  And they enchant the collar of Greg’s Jim to where they swap bodies.  I was a little upset by this but there is a point to this when as his dog, Greg hears that his mom had already accepted him being gay.  It is so important to look at this short and how coming out is being more normalized.   Looking at what Steven Clay Hunter said about him making the short is so important.

I didn’t come out until I was 27, and I’m 51 now,” Hunter said. “I wanted to make something I could show my seven-year-old self, like something that when I was young I could look at and see myself in because there was nothing when I grew up.” Hunter was raised in a small town in Canada where, he said, “there was nothing that told me being gay was okay. I buried it. I crushed it. It took years to finally deal with it.”

Looking at Hunter’s words echoes something that we have and will hear from queer creators, they didn’t have characters that looked or acted like them growing up, so they created them so that the next generation could have them.   Something Hunter says of the other attempts we’ve looked at is interesting.

“Those were valid attempts by filmmakers for representation. I think they were trying,” Hunter said. “And that wasn’t the focus of those films. I think the more we actually sit down and write stories for with queer characters in mind, it’ll feel more honest.”

I understand what he is saying and to an extent, it does soften the blow somewhat but I still can’t go with how the other portrayals were handled.  And this short received Special Recognition at this year’s GLAAD Awards.

This short is one of the best things I’ve had the pleasure of watching for this retrospective and it was a pleasure to return to.  Next time, however, we are taking a look at two characters from what’s easily my favorite animated series airing right now as I look at Luz and Amity. 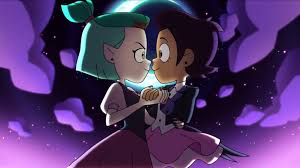 2 thoughts on “A Look at Disney’s LGTBQ Characters: The Characters of PIXAR”