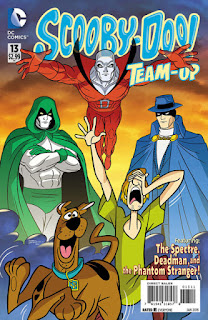 We continue our short Scooby Halloween celebration by heading to the world of comics.  Scooby-Doo has quite a few comic book series dating all the way back to Gold Key Comics. 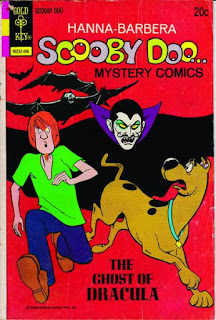 I’ve mentioned in the past that I’ve thought of doing a Scooby-Doo comic retrospective.  The issue there (heh) is that Scooby has starred in so many comics from when he first debuted on tv.  I may keep this as an occasional thing and save it for Holidays akin to my Horrors of Riverdale and Sabrina comic reviews. At the very least, there are two that I do plan on looking at during the Christmas season. 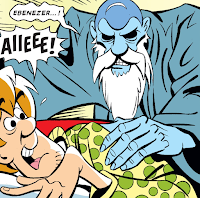 With that out the way, I am looking at a comic from what I’ve heard described as the best Scooby-Doo comic book series and perhaps some of the best work that’s been done with Mystery Inc. in ages. This is from a series titled Scooby-Doo Team-Up.  The premise is simple, think of The New Scooby-Doo Movies and how those had a different guest star each episode.  Like that but with this being a comic book medium the possibilities seem even more endless and there are a lot of DC team-ups.  Which yeah as this is a DC book. 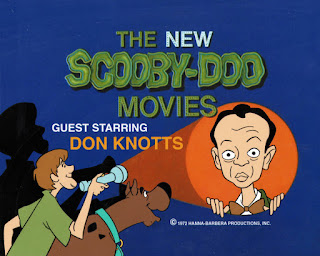 This is an issue that does lean a heck of a lot into the DC side of things and namely the spectral side of DC Comics.  This works as this is a Halloween comic and it stars the likes of The Phantom Stranger, Deadman, and The Spectre.  Speaking of The Spectre has one of the best moments in this comic.
The Plot
It’s rather simple really,  The Phantom Stranger and Deadman come to Mystery Inc as how the ghosts have been disappearing. There’s a great moment where Deadman tires of Shaggy’s running around and decides instead to possess Shaggy’s body to deliver the message of what’s happening.  And we get a great sequence of classic DC and HB ghost characters that have been disappearing.  It’s soon figured out that the Ghosts are being held in Death Valley, Nevada and this is where the comic gets good.
I mean The Phantom Stranger transports them there and this shot is so great 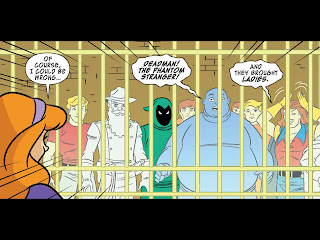 It turns out that one of Phantom Stranger’s foes, Tannarak has been kidnapping ghosts to add to his collection.  Even Shaggy questions why not just collect stamps. I’m in agreement with Norville here, a bit of a weird collection.  The bars there are meant to keep ghosts in as they can’t go in or out.  However, Tannarak posed as a ghost to lure The Phantom Stranger and Deadman to his trap.  Making it easier to lock The  Phantom Stranger in with the other ghosts.  Deadman tries to stop him but Tannarak can see him.  Wonder if he knows Frank Banister?  So yeah, that didn’t work.
Tanarak has already caught The Spectre and this might be where things would go from bad to worse but not quite.  The gang sets out to The Spectre’s human host but first, we get a great moment where Daphne willingly lets Deadman take control of her body. 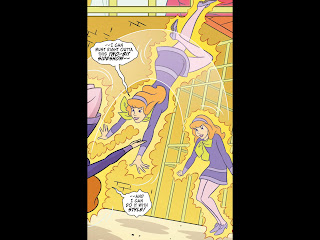 Yeah, that’s pretty great.   And it does work to knock the villain down a peg. However, that is not the greatest moment. This is. The Spectre inhabits Scooby. 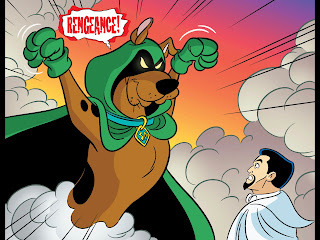 Yeah this works and the ghosts get their revenge on Tanarak and everyone is transported back home.  Shaggy thinks everything that happened was a dream.  There’s a cute moment where the gang gets trick-or-treaters dressed as the ghosts that they aided as Deadman watches from afar. 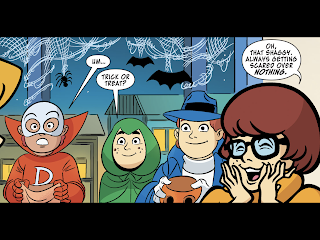 Yeah, this comic is just fun.
My Final Thoughts
I started reading this series when DC Comics made over 250 Scooby-Doo available for free when Scoob! was released earlier this year and that was the best part of the movie because these comics did such a great job of capturing the spirit of Scooby-Doo.  This comic also reminds me of something someone said on Twitter this week that Scooby works best when there’s a balance of the supernatural and mystery.  This comic shows that by tapping into the supernatural side and to close out this event, we will be looking at my favorite Scooby movie that does this so well. 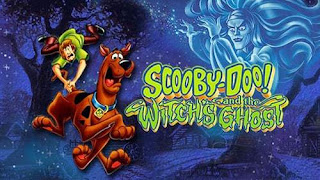 4 thoughts on “A Scooby Halloween: Don’t Be A Stranger (Scooby-Doo Team-Up # 13”