Well, I’d say yes and no. There are portions of it that don’t hold up as well as others. But I’ll get to that in a bit.

The film opens with Baron von Frankenstein performing some sort of experiment in his laboratory. He creates some sort of secret formula, and then injects a raven with it. He then releases the raven, which flies out the window, and lands on the branch of a tree. Then the raven and the tree explode in an explosion resembling a mushroom cloud. Baron von Frankenstein (voiced by Boris Karloff in what would be his last Frankenstein-related project) chuckles and says, “Quoth the raven — nevermore!”

He then announces that he, who had previously discovered the Secret of Creation, has now discovered the Secret of Destruction. And he is now inviting the other members of the Worldwide Organization of Monsters to announce his discovery. We then get a sequence introducing us to the various monsters one-by-one, as the title song, sung by Ethel Ennis, plays.

The title song is an Ear Worm, and it gets us into the mood for an occasionally dark comedy featuring monsters. “The full moon … brings out the monster in you…” As the opening credit sequence proceeds, we see Dr. Jekyll/Mr. Hyde, the Mummy, the Hunchback, Dracula, the Invisible Man, the Werewolf and the Creature from the Black Lagoon receive their invitations to the titular party.

After the invitations are all sent, the Baron announces to his assistant Francesca (voiced by Gale Garnett), an attractive redhead who the Baron refers to as ‘his masterpiece’, that he is retiring as head of the Worldwide Organization of Monsters, and handing over the reigns to his nephew Felix Flanken. Francesca is a little displeased, as she believed she was going to be the Baron’s successor.

The Baron also notes that one monster, who he only refers to as ‘It’ was not invited to the party, because “it was a crushing bore at our last party. It kept crushing boars, wild boars, in its bare hands. Frankly, It disgusts even me.” Please be aware this was made back in 1967, long before a certain Stephen King story was written, so the Baron is not referring to Pennywise the clown or other manifestations of the murderous monster of Derry. Instead, ‘It’ turns out to be … well, I won’t spoil it for you but its identity is revealed in the climax and helps give the non human-sized monsters their due.

Felix Flanken, an awkward, clumsy nerdy type who works at a drug store, has no idea of his relationship with Baron von Frankenstein. All he knows when he receives the letter is that he’s been invited to an island in the Carribean to attend a convention of notables and take part in the unveiling of a new scientific discovery. He’s an inept, kind-hearted young man prone to sneezing when he gets excited, and has no idea what he is getting into. Felix is voiced by voice actor Allen Swift, who gives Felix’s voice a sort of Jimmy Stewart impression.

Allen Swift also voices most of the monsters, including Dracula, Dr. Jekyll/Mr. Hyde, the Invisible Man, and the Mummy and Frankenstein’s Monster (though the latter two don’t really get very many lines outside of grunts, they are very expressive). Swift also voices Yetch, the Baron’s zombie butler and head of staff, doing a Peter Lorre impression so accurate that some have mistakenly believed Peter Lorre himself was the voice of Yetch. In addition, Swift voices a number of bit players, including Chef Mafia Machiavelli (the self-proclaimed world’s best chef who cooks for the party), Mr. Cronkite (Felix’s boss at the drug store), and the Freighter captain. All in all, he is to Mad Monster Party what Harry Shearer is to The Simpsons — voicing a dozen or more characters with very little in common with each other, and giving each their own distinct voice.

Meanwhile on the island, preparations are made for the party, and we’re introduced to the Monster and the Monster’s Mate. Instead of resembling the Bride of Frankenstein, the Monster’s Mate instead resembles a green cross between the usual depiction of the Frankenstein Monster and Phyllis Diller, and in fact is voiced by Phyllis Diller, complete with her signature laugh. The song she sings to the Monster (“You’re Different”) helps shed some light on their relationship.

After some silly misunderstandings and slapstick on the freighter sailing to the vicinity of the Isle of Evil, in which Felix briefly meets a few of the invited monster guests but fails to recognize them as monsters, the monsters leave the freighter so they can arrive at the party early. Felix will not arrive until the following morning.

At the party, the Baron announces to the assembled monsters that he has discovered the Secret of Destruction. One drop of the substance in his vial can destroy matter. He announces he is retiring as head of the Worldwide Organization of Monsters and handing over all his secrets to his successor, whom he shall name the following day. The monsters begin speculating as to which of them will be handed the secrets.

While Little Tibia and the Fibias (a skeleton band) play “The Mummy” for the rest of the monsters, Francesca and Dracula meet on the castle balcony. There, Francesca tells Dracula that the Baron’s chosen successor is no one they know, and that they should steal the Secret for themselves. Francesca then sings the closest this movie has to a Villain Song (“Our Time To Shine”). However, the Monster’s Mate overhears their discussion, and soon a brawl ensues between all of the monsters present, played for wonderful slapstick.

The next morning, Felix arrives at the island, unaware that the monsters may be trying to kill him. I won’t spoil too much of what happens next, but plenty of slapstick, verbal and visual humor, and drama ensue.

So, does it hold up? Well, I’d say that for the most part, it holds up pretty well story-wise and comedy-wise. The character designs by Jack Davis are fun takes on classic monsters, and the songs by Maury Laws and Jules Bass are among the better songs in Rankin/Bass productions not involving Christmas.

It’s also very much a product of the times it was made. The Secret of Destruction, which the Baron has created and which the monsters wish to possess, is clearly inspired by the atomic bomb (given the aforementioned mushroom cloud that results when it’s tested). In 1967, the Cuban Missile Crisis was still fresh in many peoples’ minds, and the fear of nuclear annihilation made vampires, werewolves, monsters stitched together from parts of the dead, and other such creatures nowhere near as scary by comparison.

Indeed, the film seems to make the point that one WOULD have to be a monster to really want the Secret of Destruction, though it’s never preachy about it. The closest it comes is the exchange between Dracula and Franscesca, when Dracula asks what kind of a monster this Felix Flanken is.

Dracula: What kind of a monster is he? A ghoul? A demon? A spook?

There’s also the depiction of the drug store Felix works at, which has a lunch counter. You don’t see ‘drug stores’ that have lunch counters these days unless they’re deliberately going for a ‘retro’ style. So therefore these days the film comes across as an Unintentional Period Piece. However, that’s not so bad. A lot of the films we consider classics today are Unintentional Period Pieces.

The most glaring flaw of the film would have to be the pacing. There are at least three scenes that are overly long and slow down the pacing of the film. One would be the night aboard the freighter, between Felix’s comedic meetings with the monsters and their departure from the ship. That scene could have been trimmed a bit.

Another is where Yetch, after having his advances rejected by Francesca and reciting a poem about her while climbing the stairs, goes to the castle tower to instruct the zombie air force to get in their planes so as to keep the island secure. This scene is long and drawn out, and could have been removed altogether, since the Baron later shows Felix the tower with the planes while giving him a tour.

And then there’s the long scene where, after the brawl, the monsters are sleeping it off. That one does have a few sight gags which are all right, but it drags.

Some might say the scene where Yetch meets with Chef Mafia Machiavelli is another example of Pointless Padding Scene Time, but I happen to like it. It’s got plenty of visual and verbal humor, and is entertaining enough that I let it slide. But the three scenes I mention above are very short on dialogue and have only a few sight gags to liven them up.

As far as strangeness goes, I feel also I should mention the ‘Stay One Step Ahead’ number. When the Baron finally tells Felix about how he wishes for Felix to succeed him as head of the Worldwide Organization of Monsters, he then begins to sing, or rather recite. That isn’t the strange part. The strange part is the creatures that appear out of nowhere to sing the chorus.

The creatures are small little Smurf-sized creatures resembling aliens, rats, and bizarre Madballs-type creatures, and look nothing like creatures from classic monster movies. They surround Felix while singing the chorus, turn on a television set showing black and white versions of themselves, and then disappear into the television set when the song is finished. They are never mentioned before this song, and they’re never spoken of again. Making this scene… 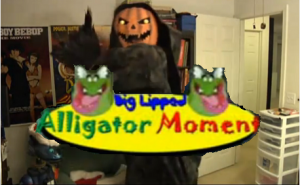 Aside from these, the only other glaring flaw that comes to mind is that a certain character’s Heel Face Turn comes across as being a bit sudden, even if it does come after Felix saves that character’s life.

But all in all, I’d say that Mad Monster Party holds up better than I thought it would when I saw it the first time. Of course, if you want a monster-themed stop motion animation film where the pacing is much better, I’d certainly recommend The Nightmare Before Christmas. But I’m sure someone is going to talk about that film sooner or later in another blog entry.

(And by the way, I’m aware that Whyboy also blogged about Mad Monster Party, but I’ve deliberately avoided reading it. So if he and I made similiar observations, it’s a coincidence).

Anyway, feel free to leave your comments below.

When originally posted, this article received the following comments, including one from Facebook.
BigBlackHatMan

10:08 PM on October 29, 2013 Hi Chris Lang. I saw this one on TV when I was a kid and I loved it. Now….yeah, the nostalgia has definitely faded. I can appreciate the campy fun in it, but it’s not a great classic by any stretch of the imagination. Great review, my friend. Peace.

Chris, great rundown! I personally can overlook what’s outdated or isn’t as solid plotwise. MMP was a great holiday special in the Rankin & Bass tradition and I think you were right to point out the Cold War anxiety inherent within it. It can certainly speak to many things that are going on now. Hope you’re well and that you have a great holiday season! – Al

On The Christmas Case: A Nancy Drew Christmas

On The Christmas Case: Will The Real Santa Claus…? (The Hardy Boys/Nancy Drew Mysteries)

DID THE MOVIE RUIN RATCHET AND CLANK? | Nero Reviews Ratchet and Clank

I’ve got a lovely bunch of “Peanuts”

Dec 2, 2020 James Faraci The Last Of The Americans
Blogs

On The Christmas Case: A Nancy Drew Christmas