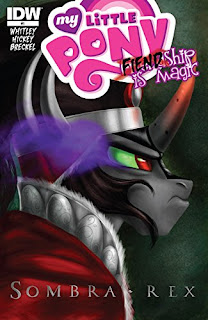 If you could change your destiny, would you? That is the question that seems to be at the heart of FIENDship is Magic # 1. It’s interesting to note that this issue came out four years before Sombra would reappear in the show and two years after he debuted.  If I’m honest, I had forgotten my opinions on Sombra. So, I looked up what I wrote about him in one of the earliest Nightmare Night entires and well…

Here’s a villain that I feel is a bit under-appreciated, which I can understand as fans have complained, we don’t know much about him and what led him to become the malevolent ruler of The Crystal Empire that he became.  In my opinion, not every villain needs a back story and Sombra was threatening enough in my opinion that he stood well without one.   I mean, he was able to take over all of The Crystal Empire and drain the Crystal ponies of all their love.

I don’t know if I still stand by this as Sombra is one of the weaker two-parter villains and only became better when he returned in season 9. Yet, we are putting aside the show because as I mentioned in the first entry this year, the Sombra of the show and of the comics are two different characters.
In many regards, it is best to toss out what I said in that original entry as this story actually shines a light on Sombra’s past and makes him a sympathetic figure. There is a wraparound of Twilight Sparkle and Cadence reading entries from Sombra’s journal to give us insight into his past but I’d rather focus on the meat and potatoes of the story as it were.
The Plot
Sombra is discovered as a young colt by himself and is taken to live an orphanage.  His appearance makes him an outcast amongst his peers. However, he makes a friend with another pony that is often mocked for being weird herself, Radiant Hope.

These two become the closest of friends and make a vow to one day to go the Crystal Faire and this is where things get interesting as they go to visit the Crystal Heart and Hope sees herself as a princess as while Sombra sees himself as a being of evil.  This brings to mind a line from Wicked.

Are people born wicked? Or do they have wickedness thrust upon them?

This is the plight that young Sombra finds himself in when he sees this image and this is something that bugged me, it is revealed that the Crystal Princess, Amore knew about Sombra’s destiny to become a monster later on when he confronts her as a young adult. And well, she told Sombra that she thought he could change his path, yet she didn’t do anything to help him and placed all this weight on a young colt and that is trauma-inducing. As the years go by, Hope attains her cutie mark and goes to attend the school of the two sisters whereas Sombra goes through quite a heinous transformation turning him into the monster that we know in the show.  Borrowing from the MLP Wiki

Sombra was created to destroy the Crystal Heart, Princess Amore’s weapon against the darkness, and set free the umbrum army that sleeps below the city. The crystal awakens Sombra’s dormant powers so that he can carry out this purpose. Sombra fears losing his only friend, but the crystal says if he does not remove the Crystal Heart before the next Faire, it will destroy him.

This is interesting to look at as it shows that this version of Sombra is willing to pause and consider how t would harm his relationship with Hope but that is soon brushed aside.  As he does go to the Heart to destroy it and this is where Sombra is justifiably angry that Amore knew his true nature how all along and turns her into a black statue. 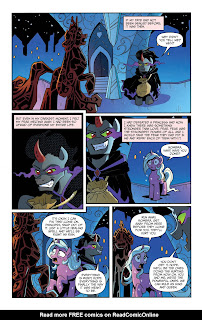 This does indeed cause Sombra to lose his only friend as he fulfills that destiny that could have been avoided if only he had the proper help.  Hope had contacted the Princesses and this is where the comic gets one thing right in saying that vanquishing is the only good thing the Princesses do when it comes to defeating villains.
This is where Sombra’s story ends and there is a bit of dialogue between Cadence and Twilight that ends this story on an interesting note.

Twilight Sparkle: I feel bad for him. He never got to see the Crystal Faire and it was all he ever wanted.
Princess Cadance: That and to crush the Crystal Ponies under his hoof. I wouldn’t feel too sorry for him, Twilight.

Cadence’s last line here is perhaps the most important thing that is said in this comic.  One can sympathize with Sombra and feel for him as what happened to him was awful but he still did awful things and that does not go away simply because he had a rough life.
Characters
Sombra 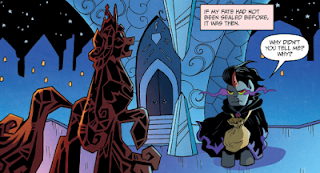 In many ways, this comic shows the darker nature of not just destiny but how believing in destiny can set on astray.  Yes, I aid that Amore could’ve helped Sombra to fight his destiny and that is true but Sombra is the one that controlled his destiny and he was the one that made the decision to give in and destroy the Crystal Heart, even after realizing he would lose the only friend, he ever had.  To him following this destiny was more important than the relationship he built with Radiant Hope that they had had since they were young children.
Radiant Hope 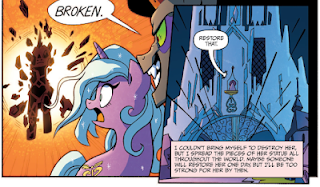 Radiant hope is another tragic figure in this story as you could feel that she truly cared for her friend and wanted to be by his side but by the time it got to the point of Sombra doing what he did to Amore, he was too long gone.  And this is similar to a lesson from the latest season of Infinity Train, no matter how hard you may not want to help someone, you can’t help them if they aren’t willing to help themselves.  That is the point that Sombra is at the end of his journey in becoming the King of Monsters as he titles himself.
My Final Thoughts
This is my favorite of the FIENDship issues because of how it delves into who Sombra was and shows that he didn’t have to be this way.  If he had made a different choice, he could have lived a happy life with Radiant Hope and never become the monster that we know him as.  Join me next time as we continue our look at IDW’s Sombra with the arc known as
Reflections 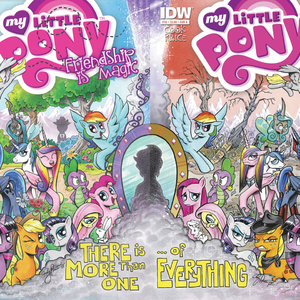