A Look at Disney Music Fridays # 159: Songs Sung By Belle 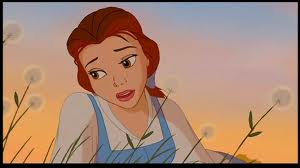 Hello & welcome back to A Look at Disney. Â And well, I’ve been itching to do another Songs Sung By article. Â For those of you that may not recall, Songs Sung By is where I take a look at a multitude of songs all sung by one character. Â And today, we are looking at songs sung by Belle from Beauty and The Beast. Strap in as this is going to be a long one as Belle has quite a few songs to her name. Let’s begin.

We kick things off with the opening song from Beauty and The Beast that also happens to share the name of our princess here. Â  I love this song as it’s a great number that lets you in on not just who Belle is but it also takes it’s time to introduce you to the rest of this small provincial town. And while this number is a great introduction to Belle and her love of reading, it’s reprise is a better introduction to who Belle is as a person.

Yeah, I think the reprise is better at exploring who Belle is. Â Because it’s allowed to be more intimate and just focus on Belle. Â And because of that, I feel like the reprise is able to give the audience a better sense of who Belle is because the song doesn’t Â have to divide it’s time between the other characters.

This is easily one of my favorite songs from Beauty and The Beast. Â  I love this song as it really gets into the relationship of Belle and Beast. And Belle’s line about how “he’s no Prince Charming” is rather sweet. Â This song is really where you get to see the first step towards Belle and Beast becoming a couple. Â And it is a joy to listen to as I just love hearing the blossoming of their Â relationship. From here, we head to Broadway.

For those that may not know, Beauty and The Beast was the first Disney musical to be adapted for Broadway and I feel like songs like this show that Disney’s movies can work well onstage. Â Once again, this song perfectly captures Belle as she is at her lowest point. Â Your’e heart weeps for her as she is stuck in a position that she wishes that she could change. Â Oh and the actress that originated the role of Belle on Broadway, Susan Egan went onto play Meg in Disney’s Hercules and you can actually hear a little bit of here in her voice.

A Change In Me

I love this song and I do wish that I could’ve seen Toni Braxton as Belle as this song was written for her turn as Belle but I’m always caught off-guard when I listen to this version as every other version of this song I’ve heard is sung in a lower key than how Ms. Braxton i singing it here. Not that make its’ bad. Â Far from it, Â I enjoy hearing her take as Toni Braxton does quite a good voice but I have a hard time placing her with this song because my Â introduction to this song was actually a cover but I really do like this take and I do wish that Toni Braxton’s version had an official release as I would greatly pay money for this. Â  Â I mean come on Susan Egan did a cover of this song and released it. Â Seriously, Â Disney, Â you have to have an original recording of this lying around somewhere. I bet you that your’e Broadway fans would love it, if they could get the Toni Braxton version of this song. Â  Our next set of songs takes us to the world of cheapquels.

Wow, Â this song is boring. Â Yeah, our first two songs come from Belle’s Enchanted Christmas and this first one here is about Belle wanting to share her love of reading with Beast. Not bad but the first Â movie covered that and did it better. Â Everything about this number from the way it’s sung to the animation just screams generic to me. And honestly, the visuals came across to me as them trying to reference stories that Disney had adapted into movies already. Â It’s just boring. Â  And yes, this is Paige O’ Hara returning to voice Belle and it’s clear that she phoned it in here. Â Go back and listen to the songs from Beauty and The Beast that she sang and compare it to this and you’ll see a noticeable difference.

As Long As There’s Christmas

Can I just say “Gag” to the opening of this video. Â This song, it’s not bad but it’s not one that I find memorable either. Â It’s one of those songs, where the words enter one ear and as soon it’s done, you’ll forget that you heard it. Â  If I remember though, I think the video that this song came from was meant to be the start of an animated series based on Beauty and The Beast. Â I gotta say, that I’m kinda glad that didn’t happen, if this is what the end result was going to look like but we will be talking about a Belle TV show on this article. Â Just wait a couple songs.

Listen With Our Hearts

I gotta be honest and say that I really like this song. Â I actually sing it’s quite good. Â I was not expecting that but this is a song that I could easily find myself listening to over and over again. Is it a bit simplistic? Sure but that doesn’t make it bad and I’m a sap for songs with a message like this. Â Don’t get me wrong, it’s nowhere near as good as the songs from the movie or the Broadway show but I find it enjoyable.

I thought that at first that this was Belle’s new voice actress, Julie Nathanson but everything I’ve read says that this is Paige O’ Hara but it doesn’t sound like her. Then again, this came out in 2008 and Paige O’ Hara’s voice most likely changed but this doesn’t sound like her. Â As for this song, there really isn’t much to talk about here. Â Like with “A Little Thought”, it’s not bad and it’s cute to hear Belle and Mrs. Potts comfort Chip but other then that, Â your’e not going to remember this song after the first time, you’ve heard it.

Sing Me A Story With Belle (Theme Song)

Yes, this show was a very real thing and I remember watching in on Disney Channel. Â Looking back it was corny and that is captured in this theme song. Â I think the best way to describe this is to say that Disney was trying to get kids interested in reading by using Belle as a platform for a TV show all about reading while also finding space to air their classic cartoons. Â  Though in my adult life, this song has taken on a new meaning as one of my favorite podcasts, Â Greetings From Storybrooke plays this song up to the lyric…

Â sing all about what happened, Once upon a time

Whenever Once Upon Â Time has a Belle centric episode. Something that was severely lacking in season 4. Â C’mon Once, your’e wasting one of your’e best characters. Â  Sorry about side-tracking there but anyways as for this song, Â its’ corny and cheesy like the show was.

This song has admittedly grown on me over time as it took me sometime to get used to Belle’s new VA. As this was the first time that I ever heard Julie Nathanson as Belle and at first I hated her as Belle but while I still prefer Paige O’ Hara, Â Julie Nathanson isn’t bad and honestly, Â I really enjoy this song and listen to it quite a bit. Â Though I do think comparing what Sofia did, (Which was bragging about getting something) to the actions of that of The Beast were a bit of a stretch but even then, that doesn’t stop me from really liking this song. Â It’s a sweet little number with a good message.

There you have it, my look at all the songs sung by Belle. Â I’m not sure but I think that this may be the longest Songs Sung by article to date. Going into this, I had no idea that Belle had so many songs but honestly, that made it a lot more fun as Â there were a few of these songs that A. I hadn’t heard in a while or. B. had never heard before. Â If you have any character that you’d like to see me do a Songs Sung by article for, Â let me know in the comments. Â  I can’t guarantee that they’ll be as long as Belle’s article was though. Â Let me know in the comments, what your’e favorite Belle song was that you had not heard before. Â Peace!