A Look at Disney Music Fridays # 158: More From Nick Pitera 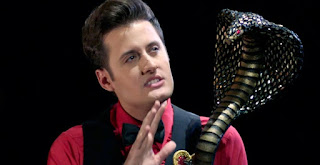 Hello & welcome back to A Look at Disney. Â Man, all the recent news for Inside Out is getting me excited because I found out just this week that one of my favorite musicians from YouTube, Nick Pitera is going to have a small role in the film.Â Â  Â Nick Pitera is a Â musician that is best known for his melodies Â and tributes but he’s also works as animator at Pixar and in more recent years, Â he has done official tribute/melody videos for Disney. Â I’ve taken a look at some of his earlier Disney work before he started doing videos for Disney back in Music Fridays # 93.Â Â  Â And well with Inside Out news, I thought it might be fun to look at some of his more recent videos. Â With that out of the way, let’s begin.
One Man Tribute To Aladdin On Broadway
We start off the list with my favorite of his current videos. Â Honestly, I think Â this is easily one of the best videos that he’s ever done. Â  Everything about it just so seamless from the transition from song to the next and even the transition to locations feel seamless and I like how he found locations that fit the tone of the song that he is singing at the time. Â And I’m sucker for something that ends with people singing onstage. Sure, Â it may just be a promotional video for the Broadway show but it’s still really good.
Kiss The Girl
Now this is more in line with the typical videos that Nick is known for doing. Â Such as his famous Disney Medley video and Â this was part of a Little Mermaid contest from when the film was re released on Blu Ray and I gotta say that this video still impresses me with his talent. Â  Compared to his Aladdin video, Â it’s a bit more stripped down as it’s just Nick doing all of the voices for the characters and that just amazing to watch. Â  And that is what I love about him, Â he can do great spectacle but also has the talent to back it up.
Belle
Okay yeah, this video is just adorable. Â I love the props and the sheep really win me over. Â This is another great example of Nick doing what he does best. Â Delivering a great performance with his voice and doing a plethora of characters, while he’s at it.
Let It Go
Our last cover is actually one that Nick didn’t do for Disney but on his own. Â And it’s Â the only male cover of Let It Go that I actually like. Â  Until I heard this one, Â I always felt like Let It Go was one of those songs that wouldn’t work with a male’s voice. Â Leave it to Nick to prove me wrong and deliver a solid performance and once again, Â he has a great music video to go with his wonderful cover. Â  Out of the 4 videos here, Â this is my second favorite. Â  Now Â I know a lot of people are sick of Let It Go covers and that almost kept me from watching this but I love of Frozen and being such a huge fan of Nick Pitera helped me to get over that decision in 2 minutes.
I hope that you guys enjoyed this look at some enjoyable Disney videos by one of my favorite artists. Â Let me know what your favorite video was in the comments. Â Peace!