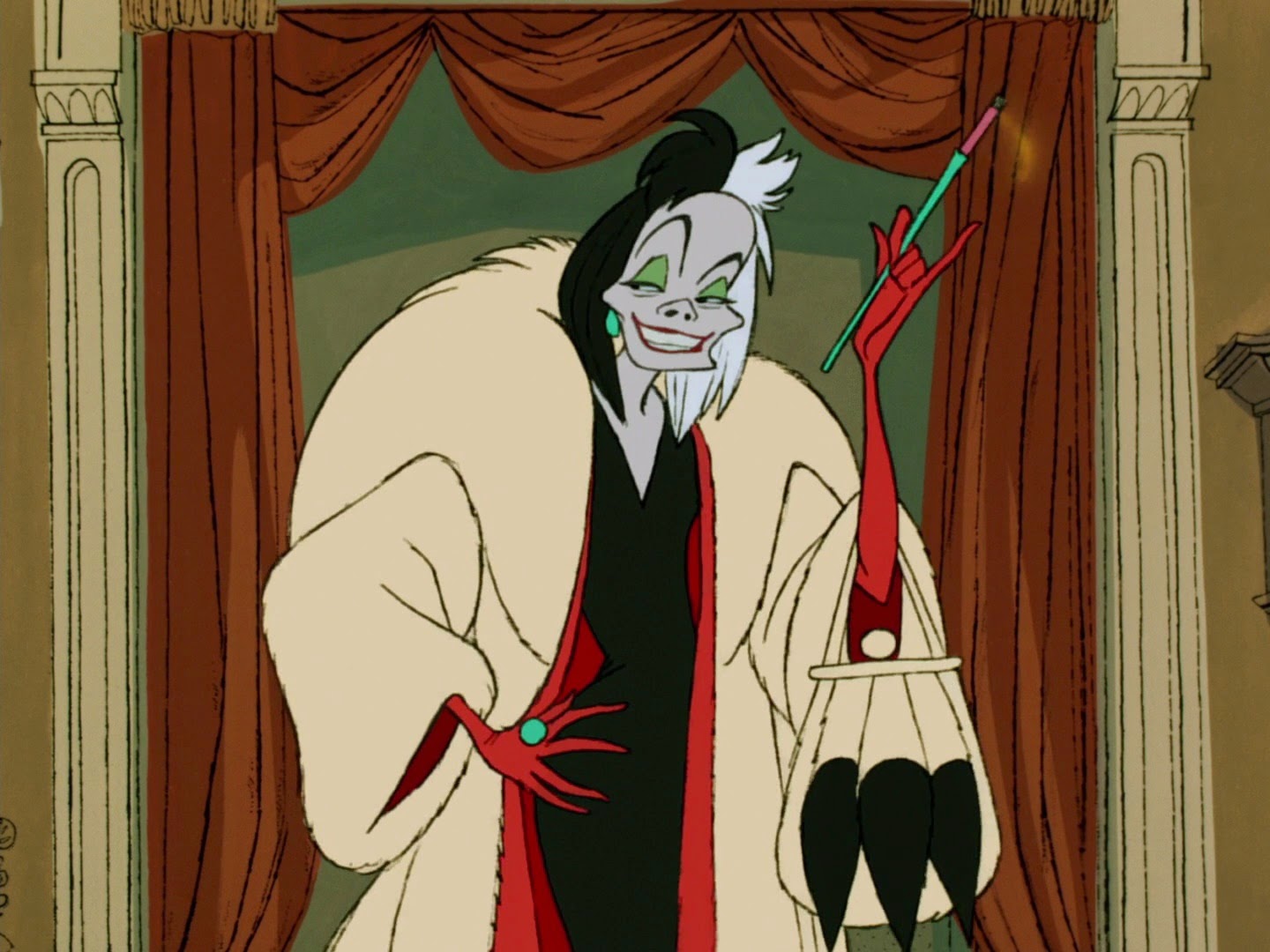 Hello & welcome back to A Look at Disney and back to Villains Profile and today, we turn our attention to the most ferocious of fashionistas. If she doesn’t scare you, no evil thing will. Â Cruella De Vil. As always, we will be looking at Â Voice Actress, Entrance, Personality, Villain Song Grand Desire, Â Lackeys, Most Evil Deed, Demise, and finally, Is Cruella De Vil A Good Villain?. Â With that out of the way, let’s begin.
Voice Actress
Betty Lou Gerson 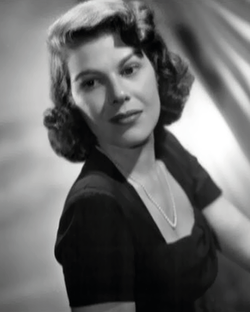 It’s interesting but I never paid much attention to Cruella’s Â voice actress. Â And I remember the night before I watched the movie, mraspriningactor shared Betty Lou Gerson’s Wikipedia page on Facebook and was a bit shocked to see that this was the voice of Cruella. Â I can see that as she doesn’t fit the image Â but that is the beauty of voice acting. Â  And Gerson as Cruella just delivers a loud, over-the-top Â performance that is truly delightful.
Entrance
The first thing we see of Cruella isn’t Â actually Â the diva but rather her iconic car. 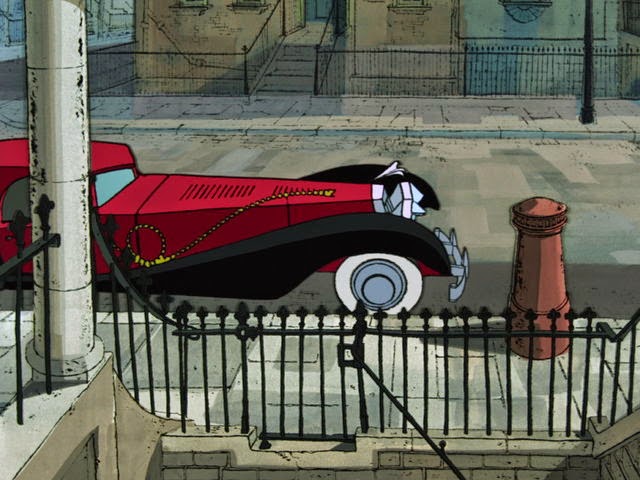 Now I didn’t know where else to talk about this Â other than here but the car is such an iconic part of Cruella that you have to talk about it, when you talk about her. Â This car just so fits her and when you see it, Â you know that Cruella is proud and boastful and has a taste for the finer things in life. Another thing that you notice with Cruella throughout the movie is that she’s a terrible driver. Â I wonder if that ties into her being a terrible person. Â And when we finally see Cruella Â enter The Radcliffe home, she does not disappoint. 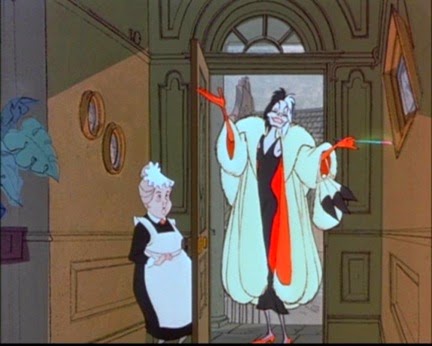 Seriously, Â her interaction with Anita and Roger is just delightful. In this one moment, Â she Â gets across how over the top she is. Â She has a care for nothing but herself and her one true love, furs. Â You know that when she enters the room, Â she will command attention and you cannot look away. Â It’s fascinating because of how hilarious she is. Â Watching the movie, Â it’s Â almost like watching a trainwreck waiting to happen. Â Because you know with how big she acts, she will fall. 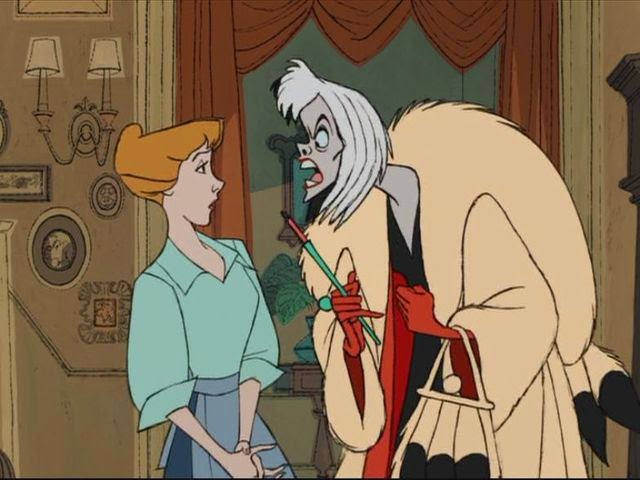 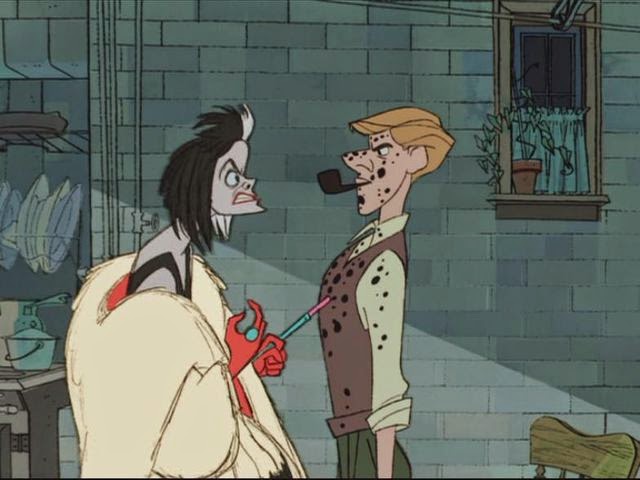 This is what I love Cruella. Â She has one of the best personalities of a Disney villain. Â She is big, loud, obnoxious and over the top and I love every second of it. Â She is just over the top and I love every minute, when she’s on screen as it is just a joy to watch. Â Cruella is often cited as one of Disney’s funniest villains and she certainly lives up to that title but besides being absolutely hilarious, Â she is also quite threatening. Â Cruella is one of those villains that is a perfect balance between comedy and threatening.
Villain Song
Cruella De Vil
Now, Â we come to Â one of the best villain songs Â from a Disney movie in my opinion and a unique one in that this is one of a handful villain songs that is not sung by the villain. Â While this was not the first time that Disney had done this, this is perhaps the most well known version of that type of song. Â And Â it is a joy to listen to as it sums up everything that Cruella is.
Grand Desire
Well, this is kinda obvious as she states it many times throughout the movie. Â She wants to use the puppies to a fur coat. Dang lady, that is evil.
Lackeys
Horace & Jasper 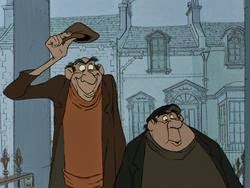 These two are a lot of fun and fit in perfectly with the type of people, you’d expect to work for Cruella. Â Horace & Jasper are just bumbling fools that perfectly work within the world that this movie has set up and they are quite a joy to watch. Â  Just like Cruella, they are so funny but so hateable. Â  I mean they still puppies. Â And they easily have one of my favorite moments Â seeing them in Hell Hall watching “What’s My Crime?” Â That entire sequence Â with them in Hell Hall is enjoyable. 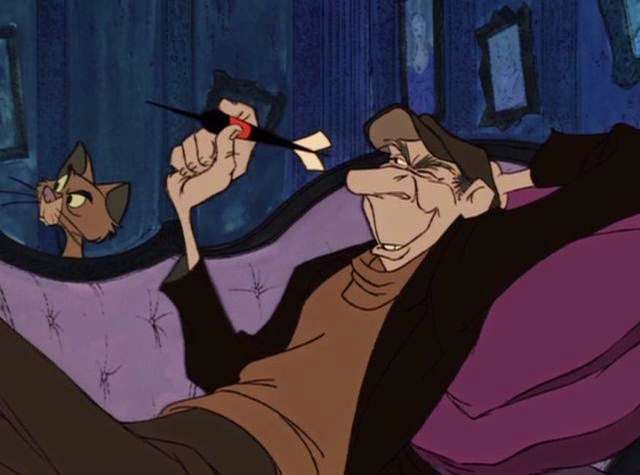 Most Evil Deed
SHE STOLE PUPPIES! Â Could Â I make it any more clear that is her most evil deed. Â Only someone with no heart Â would Â take Â this cute little creature away from it’s parents.
It doesn’t get more heartless than that. Â  Â She stole puppies. Â  That is cold hearted. Â I don’t even own a dog and I use to be scared of big dogs but Â stealing puppies erases all that. Â To make a fur coat out of them, There is something not right in her head.
Demise
Cruella’s demise is a bit weird as Â she has less of one than Hans did. Â  After a long chase to get the puppies back, her car which has been torn to shreds crashes in the snowy hills and Â she is just told to shut up by Jasper. Â  Though you gotta love how psycho, she goes during this chase throwing all caution to the wind. 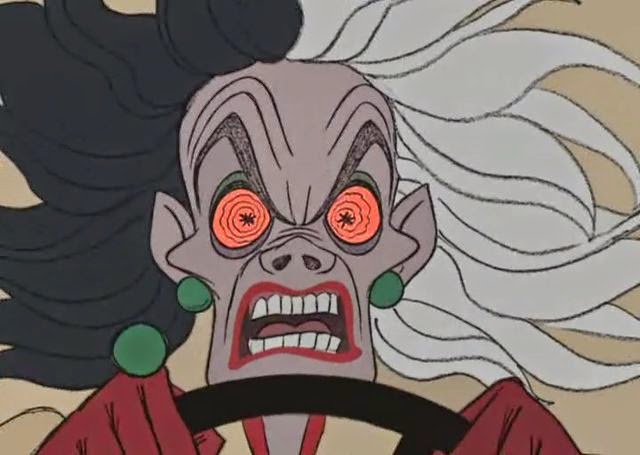 That is the thing of nightmares right there. Â  Now, Â it’s odd that Cruella didn’t really have any comeuppance. Â  Â It wasn’t until the ’96 remake where Cruella finally got her due as she was arrested for her theft.

But in the animated movie, she gets off free. I do wonder if anyone ever found out about what she did.
Is Cruella De Vil A Good Villain?
Yes! Absolutely, I love Cruella. Â Re watching this movie showed me how much of a highlight she is this movie. Â She is easily the standout character and everytime, she is onscreen is a delight as she finds the right balance between menacing and humorous. Â  She is one of the funniest Disney villains out there and perhaps one of the best as well. Â  And I think she has gone up a few notches as one of my favorites after re watching 101 Dalmatians. Â  Join me next time for the final Villains Profile as we look at my favorite Disney villain of all time….
Jafar 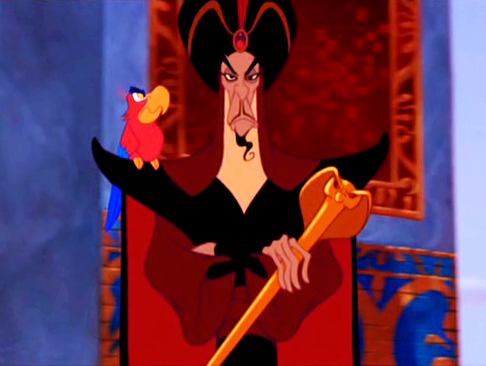