A Look at Disney’s Classic Shorts Showcase: Out Of The Frying Pan Into The Firing Line 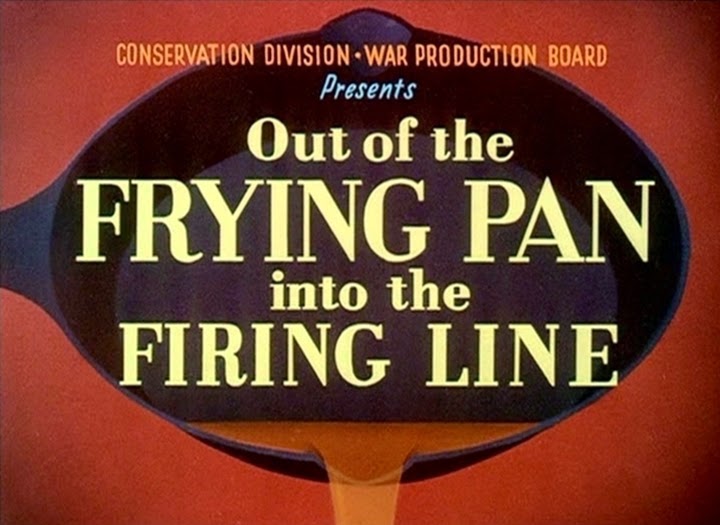 Hello & welcome back to Â A Look at Disney and to Classic Shorts Showcase. Â  This past Christmas, I received a book about Disney During World War II and Â that is a period of the company’s history that has always interested me and that Â there is so much to cover Â and this short is one Â the rare Â WWII shorts to star Minnie and it focuses on the importance of saving waste fats that can be turned into explosives to aid in the war.
The Plot
Â
Â
The plot is pretty basic, Minnie is about to give Pluto some bacon grease after cooking a breakfast and Pluto really wants it but then the radio turns on and says to save the fats. Pluto is annoyed but we are shown how fats can aid in the war.

Pluto is still annoyed but then the announcer says Â to think of the ones that are over there fighting the war and we then see a picture of Mickey in uniform.

This is what encourages Pluto to change his mind and gets Pluto to help in the effort to get a can to put the grease in and take it to the local butcher to donate it and Pluto gets paid in weenies.

Now, there isn’t Â much in the way of entertainment or character here, so I’ll be skipping that part of this review because there really isn’t anything to say on the characters.


This is an interesting look back on the history of Disney during this period and to see how these shorts reflect what was going on in the time. Â This short more than anything else is neat piece of history. Â And one that I think you should track down. Peace!