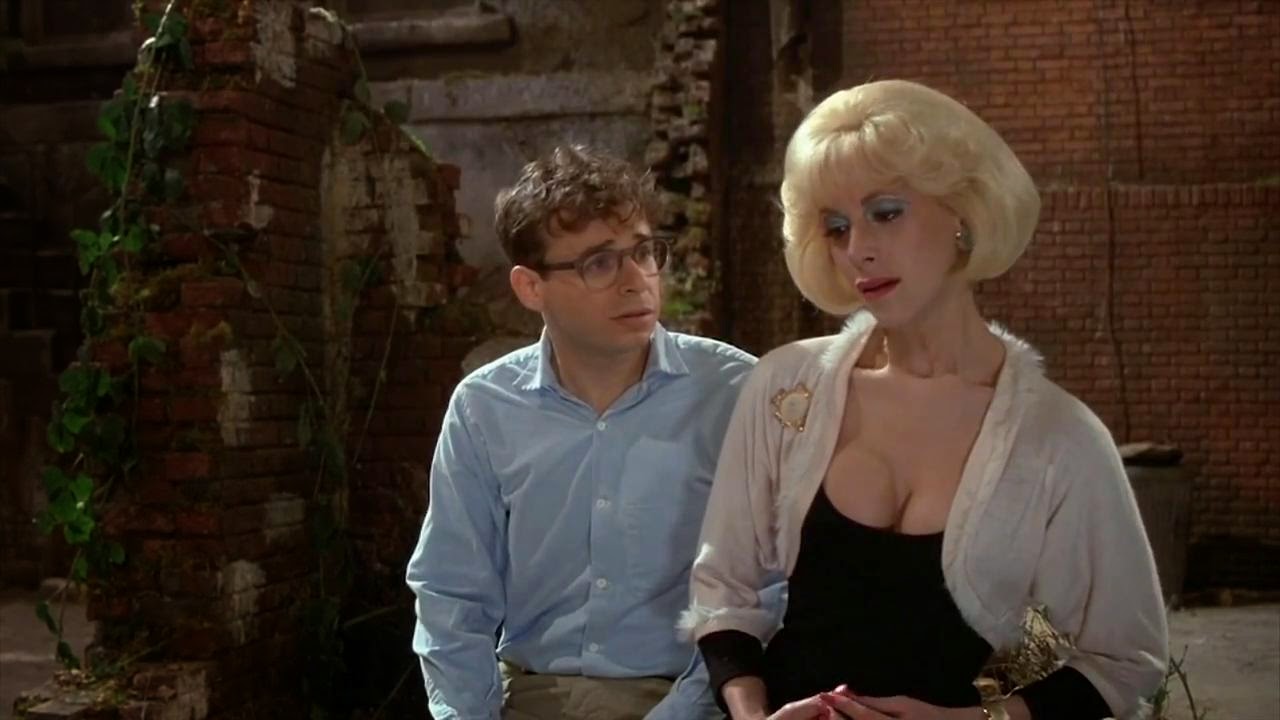 One of my all time favorite musicals is “Little Shop of Horrors” and said musical has what I count as my all time favorite song from a musical, “Suddenly Seymour”. There have been various takes on this classic song and I’ve decided to look at them all. Not to choose, which one I like best (it’s the film version BTW) but because there have been so many takes on this song that I thought it’d be fun to look at the different versions.

We start with the original Off-Broadway Cast and I must say that being used to Rick Moranis’ Seymour, this Seymour doesn’t have have the same sound and the Audrey singing there is Ellen Greene, who would reprise the role in the film. Again, she sounds different but still really good. It is neat to go back and hear the original take on one of my all time favorite songs.

Oh, I can’t say anything bad about this version. I love this song. If I were to ever do a countdown of my favorite Musical Numbers, this would be # 1. This song is what pushed “Little Shop” from being a good musical to one of the greats in my opinion. This rendition is just so heartbreaking and when I hear Ellen Greene’s Audrey in this version, my eyes to start to water up for her because I can actually feel that she is finally putting the pain of the past behind her and embracing her new happy life. (That is if you don’t watch the horrid Director’s Cut).

I gotta say that behind the movie version, this is probably my second favorite version of this song. This Seymour has a real sweetness to his voice that just makes him so endearing and that you are truly rooting for him. I’ve heard some people compare this Audrey to Ellen Greene and while, she doesn’t have the same voice. Audrey is not an easy character to get right and this actress does a fine job here.

Anyone that knows me knows that I LOVE Carrie Underwood. I have the biggest crush on Carrie but… I gotta be honest. Something about this version feels off about this. I mean I love Carrie, I really do and it’s cool that she covered one of my favorite songs but her voice doesn’t seem like the right fit for this song and that is also true of Patrick Wilson. It’s cool to hear Carrie sing this as a fan of hers but I’m sorry , I can’t help but picture Rick Moranis and Ellen Greene, when hearing this and they don’t stack up.

I had no idea that this version existed until looking up versions for this song and all I gotta say is WOW. This is good. Mandy Moore should have seriously gotten the chance to play Audrey, if she is this good and Adam Pascal from RENT (one of my favorite musicals) does a really good job of putting a new spin on Seymour’s part of the song while remaining faithful. All I can say is that I really want to hear Mandy Moore cover “Somewhere That’s Green” after this. Â Now, Â I read Â the comments Â on YouTube Â  regarding Â this performance Â and many Â were Â unkind to Miss Moore Â saying that she ruined this song. Â And well, Â  as Â you can Â see Â from Â my praise, Â I don’t Â believe that Â to be the case. Â No one Â will ever compare to Â Ellen Greene Â as Audrey Â but even then, Â I feel Â Mandy Moore did an admirable job here.

Yes, I’m a Gleek and I make no apologies for that. I’ve been fan since season 1, episode 1. I know the internet likes to rag on the show and I get it but I’ve loved this show through all of it’s ups & downs such as losing fan favorite, Cory Montetith to a drug overdose. In the final season’s first episode, Rachel Berry (played the girlfriend of the late Cory, Lea Michele) and Blaine Anderson (played by Darren Criss) are singing this song as a means to cheer Rachel up after she loses everything that she had worked for. If you know the show, it’s her fault. Now, when I first heard this version, I was somewhat confused because A. Rachel & Blaine are most certainly not a couple as the latter is gay. So, I was trying to figure out the context for this song and then when I heard it, my second thought was that I wished that they had done it before Cory died because I would have loved to heard Cory & Rachel sing it to each other as the two truly loved each other and yeah, it was a rocky road but I’m just yearning for what could’ve been and I think a Rachel & Finn version of this song would have been fantastic. Alas, I’ll never know but still from what I’ve heard I’m excited to see it in tomorrow’s season opener. Sure, Rachel singing “Let It Go” is getting all the buzz right because it’s “Let It Go” but I’m more excited about this.

These are my thoughts on this song. What’s your favorite take here. Let me know in the comments. Peace!