A Look at Disney Christmas: An Adaption of Dickens’ A Christmas Carol Preformed by The Walt Disney Players 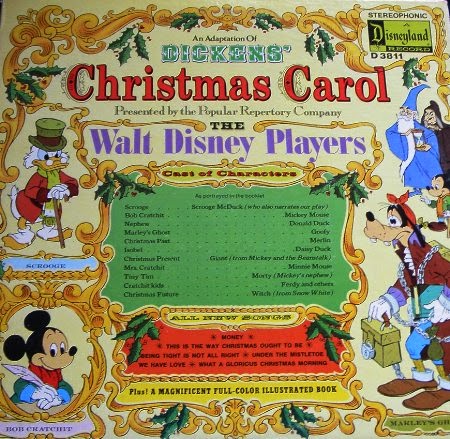 Hello & welcome back to A Look at Disney and have I got a treat for you. Who here loves Mickey’s Christmas Carol? 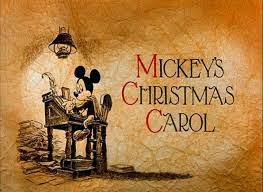 Thought so. Mickey’s Christmas Carol is one of my all time favorite Christmas specials but did you know 9 years before the now classic was released, a n LP recording conceived by Alan Young, Scrooge himself came up with the idea and I have been trying to track down this version for years because I’ve been curious about the differences in this source material that would become Mickey’s Christmas Carol and for the most part, it’s the same with some characters in different roles, then the ones you know and it’s also a musical but I don’t want to focus on the songs. Here is the video of it.

One major difference I noticed between the classic short and the source material is that we had a narrator. A first person narrator to be exact in the form of Scrooge and here he was telling us his story and I liked that touch because it made the story feel more personal and as though Scrooge was sharing his experience from the past.

Do I really need to go over the plot, if you’ve seen any version of A Christmas Carol, Scrooge is visited by three ghosts that show him the error of his ways. Past, Present, and Future and unlike the Luna version, I looked at last week, this version is pretty faithful. Scrooge is a miserable miser that has no time for kindness and if you know Mickey’s Christmas Carol, you know the story.

Interesting note, this was the first time that Alan Young voiced Scrooge and I honestly wouldn’t have known that, if I hadn’t looked up the information for this review because he sounds like the same Scrooge that he would voice later on in not only Mickey’s Christmas Carol but also DuckTales. Thought, it was rather cool to go back and listen to his first outing as Scrooge McDuck.

Mickey served the same role as he did in the short film but having a different voice actor meant a different take on the voice and no offense to Mr. MacDonald but I think that I prefer Wayne Allwine’s take on Mickey. In part because that is the one I grew up with and also because his take on Mickey was just too squeaky for my liking. It sounded like he inhaled helium before recording.

I really can’t say much about Nephew Fred in this as we was exactly the same as he is the short film.

The Fundraisers (Honest John & Gideon) both voiced by Alan Dinehart

Unlike the short, where Mrs. Crachit remains silent, she actually gets one line noting her disdain for Scrooge at the Crachit’s Christmas dinner. It’s small but I like that because it always bugged me that she didn’t get to say anything in the short.

Tiny Tim barely seemed to be in this version. Sure, we still had focus on him but nothing like the scene, where we see Bob Crachit placing his crutch at his son’s gravesite. Scrooge instead learns about his passing by seeing Tiny Tim’s empty chair.

For some reason, Goofy’s Marley seemed really dumb in this one. And that was just weird. For instance, he didn’t even know why he was wearing the chains. That bugs me a little bit because this is one of the most important parts of the story and at least in the short, they were able to make it funny with him still getting message across and actually knowing why he wore the chains.

Ghost of Christmas Past (Merlin) also voiced by Alan Young

I gotta be honest and say that this was distracting because Young didn’t really do anything to differentiate his Merlin voice from his Scrooge voice. So, during this portion, Young was talking to himself and to me, it didn’t feel like there were two different characters but just one man talking to a voice in his head. Though, I did find it interesting that Merlin referred to himself by his actual name before stating that he was the Ghost of Christmas Past.

Again, we have a different voice actor for Willie The Giant but I did enjoy his performance as he embodied the warmth and kindness of this character perfectly and it was just so joyous to listen to and also I love that they threw in a reference to Jack and The Beanstalk signalling that this is indeed the giant from that story. That was a cute touch.

Here as the Ghost of Christmas Yet To Come, we had The Old Hag from Snow White and she was creepy. Hands down, one of the best performances here save for one line about Scrooge being the richest man in the cemetery. Other than that, all you got out of her was a cackle and for some reason that cackling was rather effective.

I had wanted to review this version for the longest time but had given up hope on finding it until I just stumbled upon it on YouTube and I’m so glad that I did because it is so neat to go back and look what inspired a Christmas classic that so many of us love. I enjoyed getting to hear this but I’m not going to say that it’s better than Mickey’s Christmas Carol for two reasons, I grew up with the short and this for all intents and purposes is Mickey’s Christmas Carol. Sure, there are some differences here and there but it is pretty much what the short became. Still, it is quite an enjoyable listen and if you are curious about what inspired Mickey’s Christmas Carol, give it a listen. Join me tomorrow as we take a look at what happens when Huey, Dewey, & Louie wish that it could be Christmas everyday in… 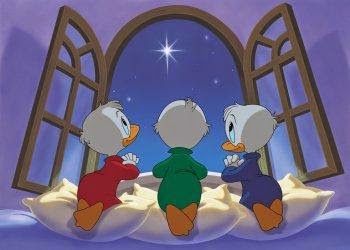