Greetings, everyone! Mediaman here, and itâ€™s good to be back! To celebrate my return, Iâ€™ve decided to do something I havenâ€™t done in a good while: Mediaman Muses. You know, something Iâ€™ve noticed around here is that not too many bloggers talk about anime. Which is a shame, because there are so many good ones. Although to be fair, anime can be pretty strange at times. But, to a person who looks at story and characters first thing (like me), anime is just like any other art form. It can be silly, it can be dark, it can be serious and action-packed, it can be scary, it can be heartwarming, and thatâ€™s just the topics I can think of off the top of my head. Something else I like about anime is that the subject matter can be just about anything, from robots to magic to high school (they seem very fond of this setting) to sports. Even if it backfires and people donâ€™t like it, you can tell theyâ€™re trying, if nothing else. The only time anime is bad is when itâ€™s choked with fan service. (Iâ€™ll leave that where it is.) Originally, I planned to do a top 10 list of my favorite anime, but I later realized there was only one anime I wanted to talk about. One that captures the imagination and never lets go. One that has a balance of humor, action, adventure, and heart. One that everyone should see at least once before they die. I speak of none other than One Piece. 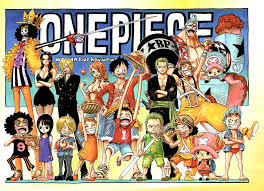 Originally a manga created by Eiichiro Oda, One Piece tells the story of pirate captain Monkey D. Luffy and his misfit crew of pirates as they search for the legendary treasure, the One Piece. (Get it now?) But how does someone examine the wonderfully bizarre and complex story that is One Piece and make it easy to understand for those who havenâ€™t seen it? Well, Iâ€™m certainly going to try. After all, this is a world where snails are used telephones/fax machines, special fruit that gives you superpowers, and everyone who fights calls out their attacks. I guess if I could only use one word to describe it, it would be this: colorful. The world that One Piece displays is one of unique characters and beautiful places to see. And before I get into this franchise, I feel I should let you know that I havenâ€™t read the manga and am only halfway through the anime (and there are over 600 episodes!). So, if I get something wrong or leave something out, go ahead and let me know. Also, there will be mild spoilers.

On the day of his execution, the legendary pirate king Gold Roger revealed that he hid his fortune (the aforementioned One Piece) somewhere in the Grand Line, and it was free to whoever could find it. These words kick-started a period in history known as the Great Pirate Era, and have driven countless pirates to search for it. One of these pirates, a young man named Monkey D. Luffy, has vowed to find the famed treasure and become the next pirate king. To that end, he has assembled one of the strongest (and strangest) crews in the world. Armed with them, and his fantastic rubber powers, he has a fighting chance to make that dream a reality.

The biggest reason that this franchise is so good, I think, is because itâ€™s so well-paced. It can balance so many genres because it takes its time to let us get to know the setting and characters. Their emotions feel genuine and human, even when bizarre things are popping up everywhere. And another thing that I like is that the villain (from whatever story arc) almost never gets away with what they do. They always get a well-deserved thrashing from Luffy and/or his crewmates. They even managed make a time skip work. This is because unlike other seriesâ€™ (*cough* Young Justice *cough*), thereâ€™s a good reason for it, but I wonâ€™t dare give it away for anyone who has yet to see it.

The Straw Hat Pirates themselves actually donâ€™t really act like pirates. They donâ€™t pillage, rob, and plunder; for them, being a pirate is basically a way to fulfill their various dreams (and fight against the corrupt World Government if the situation calls for it). A word youâ€™ll hear a lot is â€œnakamaâ€. Roughly translated, itâ€™s the Japanese word for â€œfriendâ€. But, in the context of the franchise, it means â€œfriends who are more like familyâ€. And when you really start to get into the story, youâ€™ll realize just how accurate that description is. So without further ado, letâ€™s meet this ragtag pack of misfits! 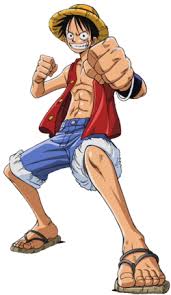 First up is the captain himself, Monkey D. Luffy. Luffy is the quintessential anime protagonist: brave, loyal, and not too bright. Normally, I donâ€™t like the â€œIdiot Heroâ€ trope, but Iâ€™ve made an exception because heâ€™s also really entertaining. As a child, Luffy idolized pirate captain â€œRed-Hairedâ€ Shanks. And after eating a Devil Fruit (a fruit that gives you supernatural powers at the cost of the ability to swim), Luffy promises Shanks that heâ€™ll be the next pirate king. So, Shanks gives him his straw hat to keep until he reaches that goal. Luffy ate the Gum-Gum fruit which gives him the power to stretch his body like rubber. As he grew, he taught himself to fight with these powers, which also might explain his voracious appetite. He also has a talent for causing trouble, but never on purpose. But, while he might not start a fight, you can bet your bottom dollar heâ€™ll finish one. Especially if it means protecting his friends.

Next, we have the Straw Hatsâ€™ swordsman and former bounty hunter, Roronoa Zoro. As with Luffy, there are three key traits that most fans know him for. One, he uses the Three-Sword Style (two in his hands, one in his mouth), a technique he invented. Two, he trains extensively (which might be why he naps so often). And three, he has absolutely NO sense of direction to speak of. His goal in life is to be the greatest swordsman in the world, a dream that requires him to defeat the current champion, master swordsman Dracule â€œHawk-Eyeâ€ Mihawk. And, every so often, he needs to remind Luffy of the difficult choices he must make. Itâ€™s this trait (while itâ€™s never explicitly mentioned) I like to think this makes him a sort-of second-in-command to Luffy. Zoroâ€™s battles are always a treat to watch, and when heâ€™s holding his swords, you better hope heâ€™s on your side. 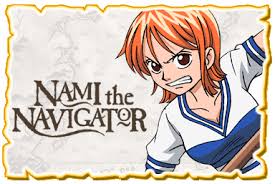 The third member of the Straw Hats is the beautiful thief herself, Nami. Nami is the shipâ€™s navigator and a gifted cartographer, perhaps the best in the entire world. She also has an uncanny ability to predict the weather. Namiâ€™s childhood was cut short when pirate captain Arlong captured her village and killed her adoptive mother. Ever since, she has had an intense hatred for pirates. But when Luffy and his crewmates defeat the pirates and free her village, he wins her loyalty and she joins up with them, now free to pursue her own dream: making a map of the worldâ€™s oceans. She loves money, even if it means extorting it from her own crewmates. She also knows how to use her good looks to charm people into doing what she wants. But despite her obsession for treasure and moments of fanservice, sheâ€™s a good person at heart and develops well over the course of the series.