Several years after the break-up of White Zombie, Rob Zombie decided to direct his own feature film with the help of a friendship with Universal Studios executive after working on Halloween Horror Nights. Sometime later, the movie was made, but it was soon shelved due to the studio fearing his film would receive an NC-17 Rating. A Couple of Years Later, Zombie bought the rights to the film and released it with Lionsgate in 2003 and it is known as House of 1000 Corpses and I have decided to talk a look at his directorial debut to start off a whole Month of films made by Rob Zombie since I think they are perfect films for this particular blog series of mineâ€¦Plus Iâ€™m a fan of his music so it was obvious that I would see his films. So, get ready for some possibly strange films, starting with this one.

In 1977, a group of young adults are traveling across America to write a book about strange roadside attractions found all around the country. After visiting one such attraction run by Captain Spaulding, they learn of a local legend of a murderer named Doctor Satan. When trying to find a Tree where he was supposedly hanged, they come across a Hitch-hiker (Sheri Moon) and soon afterwards, their tire gets blown (Shot) and they decide to head to the home of the Hitch-hiker Unaware of her strange and psychopathic family.

The main focus of the film is more set on the Firefly Family rather than the travelers.

The film is basically establishing that the family is the one would you should most likely â€œcareâ€ about. I use that word very loosely for this film. The family consists of Baby (Sherri Moon) the semi-sweet but psychotic daughter, Otis (Bill Moseley) the insane and politic spouting son, Tiny (Matthew McGrory) the Giant but harmless son, their Mother, the other son Rufus, and their Grandfather.Â  I find it interesting the majority of the characters are named after Groucho Marx characters.

I guess theyâ€™re big fans of the Marx Brothers.

The â€œMainâ€ characters of the film donâ€™t have much personality to them and they are almost forgettable except for one of them is played by Rainn Wilson. There are also some Policemen in the film, but they really donâ€™t last very long. The most memorable character in the movie is probably Captain Spaulding. 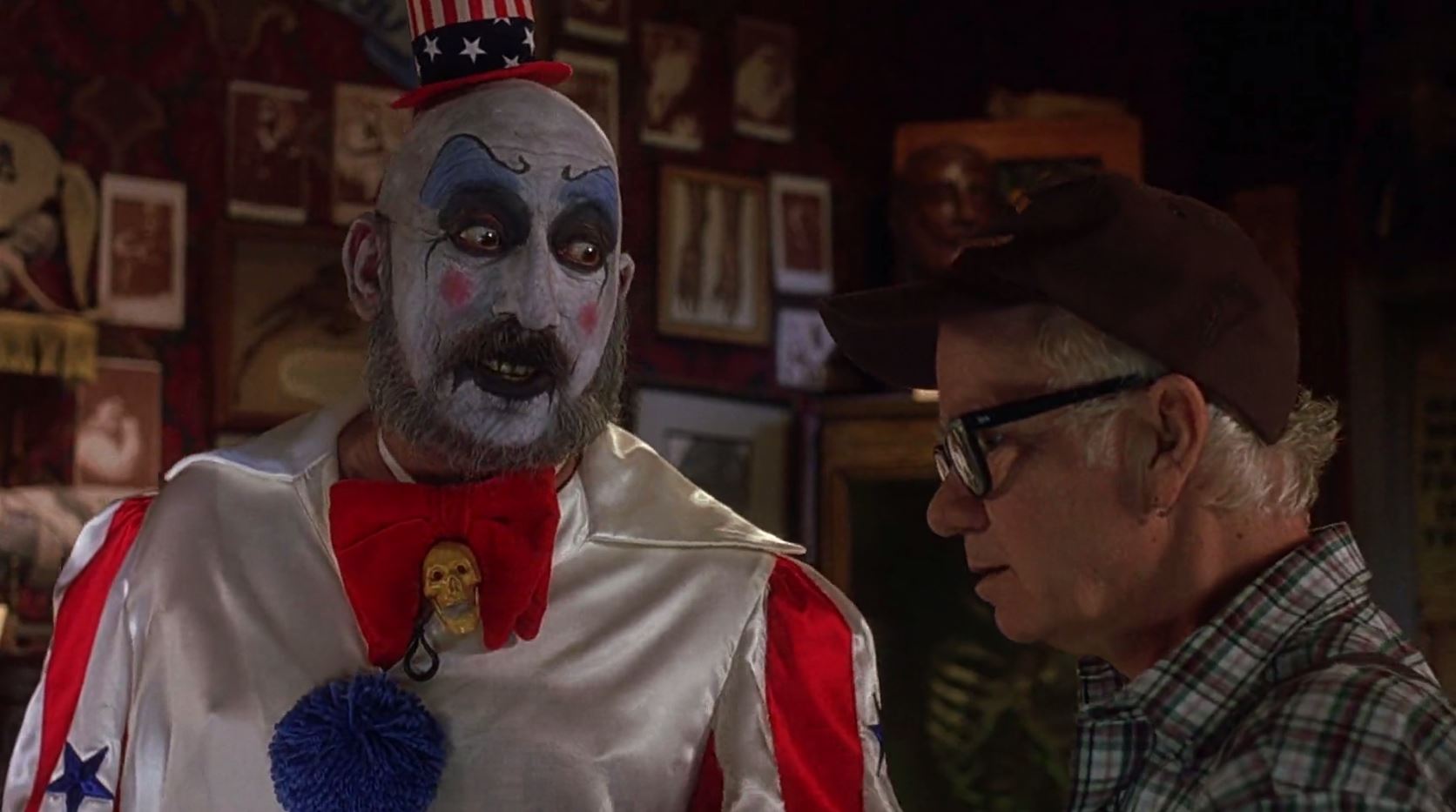 He mostly appears in the beginning and in a few other parts in the film near the 2nd half of the film. I have to admit he does have a rather strange personality and often swears in every sentence he has in his scenes, but it makes him the one character that is probably the most popular in the film. (Plus I love some of his bits on the DVD menu.)

With the news of the studio fearing it that it would get an NC-17 rating, of course it is obvious that it was very violent. The violence happens very often throughout the film and it honestly thatâ€™s exactly what I was expecting from it since most of the modern horror often go for that sort of thing. The film reminded me a lot of Texas Chain Saw Massacre, The Hills Have Eyes, and Deliverance with most of the scenes of torture and violence being caused by some backwoods family that the main characters stumble upon while traveling.

It also throws in lots of different transition shots involving the Firefly family or some clips that look like they come out of old forgotten B-Movies. I guess this would be fitting sitting it is rather reminiscent of some of Rob Zombie’s songs which often contain audio samples from horror exploitation movies.

Final Thoughts: It wasâ€¦Interesting. I didnâ€™t have any major expectations going in, but it did seem to share some minor things I was expecting (mainly with the violence level and some of the characters.) It’s violent, it’s odd, it’s pretty much a bit of a strange watch. In the end, I’m left with neutral feelings toward it. I don’t hate it, but I don’t love it enough to recommend…So, watch it if you want to, although it definitely seems made for a a select audience.