Hello & welcome back… No, I can’t do it. You guys gotta watch this one for yourselves. I give you Mouse Mania.

I’ll wait, while you watch the short. It’s going to take some time to digest. Okay, I imagine that for some of you that your reaction to that was probably along the lines of something like this…

To be honest, I have no idea, myself. Here’s what I can gather, Mike Jittlov, who had gained fame for his work in stop motion with films such as The Wizard of Speed and Time was commissioned by Disney to make this short for the prime time special, Mickey’s 50th. 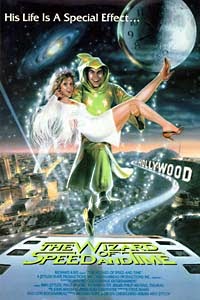 And you may have noticed that I ditched the usual format of review for this article. Well, that’s because I have no idea what was going on in that short. From what I could gather, it seemed as though, a man was meeting at a psychiatrist’s office and had a deep obsession with Mickey Mouse that caused him to see Mickey toys and things with Mickey on them come to life.

(Oh no, that could be in the future… nah) It’s impressive what was pulled off in this short. I’m particularly intrigued by what was done with the toys.

In particular, this set and how it was building itself. Again, it seems like it was coming from this person’s mind and at the end, it seemed as though, he came to accept that liking Mickey was okay and saw the Mouse come to life and decided to leave the Psych office with Mickey.

If I’m to understand, this is one of the only times that Mickey has officially appeared in a stop motion short. Also, I do like this little touch of Jittlov sunk in his and his partner’s name into the short in a way, to where they could not be edited out.

Since Disney did not usually allow individual creators to receive credit on their television productions (preferring a generic thanks to “the many Disney animators who made this possible”) Mike put his and partner Deven Cheregino’s name on the toys in the final production number, where they couldn’t be edited out.

That’s kind of cool. A creator should get credit for the work, they did and especially with something as unique as this short.

This is clearly not your typical Mickey Mouse short but looking at it, it’s not about Mickey but rather about his fans and how much of an impact Mickey had (and still has) on his fans. I think that Mouse Mania is showing that sometimes, we can take it a little too far and let our fandom drive us crazy but also to never forget that we love what we love and we shouldn’t let it drive us crazy. I don’t know, I’m just guessing here. Any of you have a better guess on what this short could be about? If so, I’d love to hear to it. Peace!