Its probably not that controversial, but I bet that most people would agree with me that Die Hard was a bloody good film. And what some people forget is that when it was first released in 1989, it was actually quite a ground-breaking action film, with its basic plot of an everyman who gets caught in the wrong place at the wrong time and has to do battle with an all-star team of international terrorists, many of whom actually have quite a refreshingly well-thought out evil plan. However, because Die Hard also made a shit tonne of money, it also meant that everyone and I mean EVERYONE, decided to copy this basic premise, some successfully and some not so successfully. This led to something of a sub-genre of action films which basically recycles the Die Hard formula and transplants it to a different location, some of them being released as recently as last year with the White House-based films â€œOlympus Has Fallenâ€ and â€œWhite House Downâ€. I like to call this sub-genre â€œDie Hard on an Xâ€â€¦well maybe TV Tropes came up with it first but itâ€™s not like they have it copyrighted or something, and it is this sub-genre that I will be celebrating in this brand-new on-going blog series. Iâ€™m going to be looking at the best and the worst of the Die Hard clones, featuring everything from Die Hard at the Hoover Dam to Die Hard in a futuristic space prison, with a plethora of action stars such as Ken Wahl, Shannon Tweed and Don â€œThe Dragonâ€ Wilson. I must say Iâ€™m really looking forward to doing these blogs given my love of both the Die Hard film series and action films in general (especially the schlocky B-Grade ones) and I hope you all enjoy reading them for the foreseeable future. But to start off weâ€™re going to be looking at one of the most successful and well known of the Die Hard Clones: Under Siege aka Die Hard on a battleship. 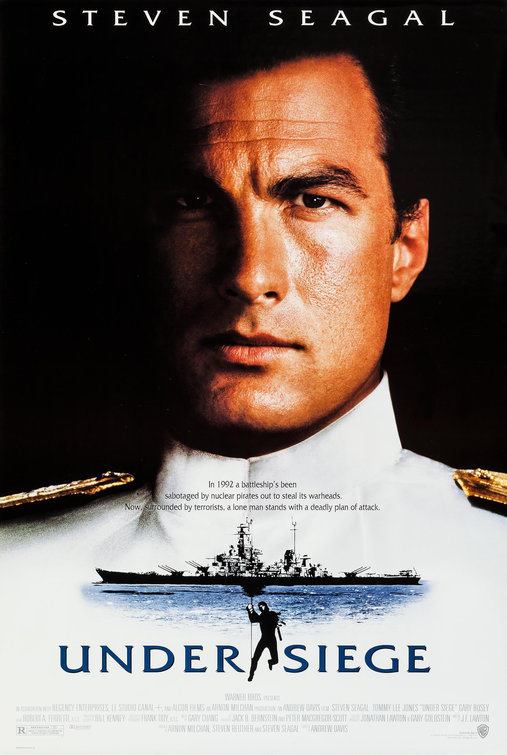 Instead of a linear step by step review of each film Iâ€™m going to be looking at certain aspects of each film, The Hero(es), The Villain(s), The Villainâ€™s Evil Plan, and The Yipee-Ki-Yay moment (aka the most awesome moment in the film).

The main character of Under Siege is Casey Ryback, a mild-mannered chef aboard the USS Missouri, which is on its way to Pearl Harbour in order to be decommissioned. And seeing as Ryback is played by Steven Seagal, Iâ€™m sure youâ€™ve all probably guessed he is no mere chef. No, in fact Casey Ryback used to be like the greatest Navy SEAL evar until an operation went to shit in Panama and the rest of his unit was killed. After that he was stripped of his rank, meaning he was unable to be classed higher than a yeoman or a chef. When the terrorists take over the ship he is locked in the kitchen freezer by a superior officer after he punches him in the face for spitting in his bouillabaisse, even though he was clearly justified in doing so. When the terrorists go to â€œtake care of himâ€ however, they unleash a wave of death and destruction as their fellow mercenaries are stabbed, shot and exploded to death, whilst Seagal barely gets a scratch on him, much like in every other film heâ€™s ever done (apart from Machete). Steven Seagal is not the best actor ever, and there isnâ€™t much in this film to make people think otherwise, although he is suitably intense and delivers his one-liners pretty well, as well as delivering quite a good speech to the villain at the end (which for once isnâ€™t about how weâ€™re killing the planet by abusing natural resources), as well as showing a little bit of emotion when he finds the shipâ€™s captainâ€™s body. The thing that really holds him back in this film, and pretty much anything else Iâ€™ve ever seen him in, is the fact that he has absolutely zero charm. Heâ€™s meant to be some kind of loveable rogue, who is beloved by his fellow seamen, but despised by his superiors for being a loveable rogue but this doesnâ€™t really come across in the film. Like, at all. Thereâ€™s one part where he watches as his fellow kitchen staff have a dance off (donâ€™t really know why that happened) and then thatâ€™s about it.

The lack of charm especially affects his relationship with his supposed sidekick Erika Eleniak, whose name I canâ€™t remember so Iâ€™ll just refer to her as Miss July, and even then she doesnâ€™t really do anything other than get her boobs out (which I was very pleased about) and shoot one terrorist in the back. Even though there is absolutely ZERO chemistry between the two actors, they randomly start making out at the end of the film as the crew cheers on olâ€™ loveable Casey. I mean, where the hell did that come from?

Apart from Ryback and Miss July, theyâ€™re also helped by a ragtag bunch of other crewmen who managed to escape the initial terrorist takeover, and only really have one surprisingly useful character trait apiece, like being able to operate the ships guns or knowing how to shut off the sprinkler system. Oh and thereâ€™s that guy who does the laundry. Didnâ€™t really care for him. None of them get killed or anything, seeing as they are protected by Seagalâ€™s invisible bulletproof force-field, apart from one guy who gets shot in the knee, but he seems pretty spry by the end of the film. In short, theyâ€™re really not very interesting characters and I donâ€™t think I know any of their names. Laundry Guy?

Now this is what elevates this film above just being a standard Steven Seagal film; Tommy Lee Jones and Gary Busey as the villains, also ably supported by Colm Meaney. Tommy Lee Jones plays Bill Strannix, a former CIA operative who turned rogue when the CIA decided to try and kill him, in keeping with this films subtle message that the CIA are fucking evil, whilst Gary Busey plays Commander Krill, the turncoat first officer aboard the USS Missouri, who murders the captain, spits in Rybackâ€™s bouillabaisse and tries to drown the rest of the crew. What a dick. Basically, these two play their parts completely over the top, and they are both absolutely amazing. The fact that Tommy Lee Jones also manages to add a touch of menace to his character, despite being completely pantomime, is quite a feat. I think itâ€™s the crazy eyes. Also, I find the way he fawns over all of the carnage that Ryback causes gave me countless moments of hilarity.

As for Gary Busey, all you need to know about his character is in this one scene;

Basically, because Strannix wants to give America the middle finger, his evil plan is to steal the USS Missouriâ€™s nuclear Tomahawk missiles, transport them using a submarine which he stole from those pesky North Koreans, and then sell them off to the highest bidders. So to infiltrate the Missouri, he and his men disguise themselves as the caterers for the shipâ€™s Captainsâ€™ birthday party, whilst Strannix disguises himself as the harmonica player in the party band. By the way, get used to the plot point of terrorists disguising themselves as catering staff as it happens fairly often. People should really start doing background checks on these guys. Apparently, Strannix also plans to launch missiles at Pearl Harbour to cover their escape but I donâ€™t really remember that part. I should really start concentrating a bit more when Iâ€™m watching flims. Overall, itâ€™s not the most original or overtly compelling plot ever and of course, when Ryback foils their plan by blowing up the submarine with the ships guns, killing Krill at the same time, Strannix just settles for trying to nuke Hawaii instead. Wait, that sounds much, much worse…

This is definitely the best fight scene in the film, even though like every fight scene in every Steven Seagal, lasts little over a minute before Steven Seagal stabs someone in the head without him breaking a sweat. But I still think it was pretty cool, although I thought its placement in the film was actually something of an error. Let me explain. Basically, right after Strannix gets his head shoved through a computer screen, thereâ€™s an incredibly un-tense scene of typing numbers into a computer. Maybe they should have done that and then had the fight with Strannix? But who am I to argue with the director of The Fugitive (that isnâ€™t sarcasm, I love that film, well at least the half of it Iâ€™ve seen).

Overall, I do actually like Under Siege. The villains are more than just entertaining and whilst he isnâ€™t the greatest actor ever, Steven Seagal does do really cool action scenes, especially the part where he is trying to rescue the crew when Krill tries to drown them to draw him out. The plot and characterisation arenâ€™t all that ground-breaking but itâ€™s still perfectly enjoyable if you feel like switching off your brain for an hour and forty minutes. And apparently it was popular enough to warrant a sequel, but weâ€™ll get to that later.

Well, thatâ€™s that for the first installment of â€œDie Hard On An Xâ€ by me Mr Smooth. Hope youâ€™ve all enjoyed it, and feel free to leave me your comments and views, as well as any other ways I could possibly improve this series as it goes on. Also, join me next time as we look at Die Hard At A Beauty Pageant (yeah you heard me right) NO CONTEST. See you all next time.