(I’m almost lost this article as my only copy of it was on the old site. Luckily, I was able to get on and save it as it’s about one of my favorite characters).

The theater has given us many great characters. But how many of those great characters take a character that is already popular and re-imagines one of the most iconic characters from the story to give her a brand new story.

That is exactly what the musical, Wicked does as it takes the iconic Oz villain of The Wicked Witch of the West and re-imagines her as Elphaba Thropp. A young girl born with green skin that is consider an outcast by her fellow Ozians, who only wants to do good but thanks to the politics of Oz, mainly thanks to The Wizard and more so, the headmistress of Shiz, Madame Morrible, the school that Elphaba attended, decide to paint Elphaba as a monster as she is not willing to adhere or condone the actions of what they do. Elphaba had always dreamed of working with The Wizard but when she went to The Emerald City and saw what they have done . Mainly turning Animals into animals. You see the former that the have uppercase A can talk and work like humans but they are treated as second class citizens. And this truly gets to Elphie as she sees Dr. Dillamond, a Goat is a history professor at Shiz that suffers discrimination from his students as he is a Goat. Elphaba wants to fight for the rights of Animals but is made an outcast, when she is tricked into turning a monkey into a winged monkey and from there, all of Oz has come to hate her and look at her as a monster. 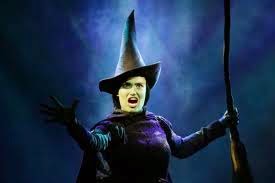 It seems that no one in Elphaba’s life from her younger sister, Nessarose, who is the favorite child to most everyone else in life seem to hate her. But that is not the case as there are two people that still do care for her. Glinda The Good Witch, who after rough first meeting as they were forced to be roommates at Shiz grew to become best friends and over time developed a friendship that went through tough times. And her love, Fiyero that was at first Glinda’s love interest but Elphaba and Fiyero grew to love each over time but because of Elphie’s status as the most hated person in all of Oz, they had to keep their romance a secret.

Elphaba is a great character as this portrayal brings a new layer to a character and makes people rethink what they know about this character that they thought they knew. More than that though, she shows that sometimes trying to do what is right, will cause you to be shunned as an outcast but if you truly believe that it’s worth fighting for, you will not give up as everyone deserves a chance to fly.