A Look at Disney Power of The Princesses: Anna (with Ratin8tor)

Moviefan12: Hello and welcome back to Power of The Princesses and today, we look at the last official princess as Ratin8ntor joins me to look at Princess Anna of Arendelle. Rat, thanks again for joining me. So, For The First Time In Forever, let’s take a look at Anna. 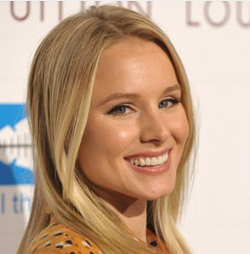 Moviefan12: I knew of Kristen Bell and she is perhaps best known for her cult show, Veronica Mars, which I’ve never seen. The only thing that I’ve ever seen her in besides Frozen is Reefer Madness: The Musical.

A film that is wildly different from this film and as for her turn as Anna, she did a fantastic job in the role, making you believe that she was this quirky bubbly teenager. She truly captured who the character was supposed to be.

R8: Kristen Bell has had a wide variety of roles over the years… most of which I’d never seen and thus can’t really comment on. But what I can comment on is just how good she does in this role. She manages to bring the ‘ordinariness’ to the character that grounds her and makes her more relatable. A lot of it comes from the animation, sure, but the voice-acting can’t go amiss either. She brings out the warmth and loveliness to the character and showcases an impressive vocal range when it comes to the singing. But permit me if you may I’d like to throw this all the way back to Snow White. I called Adriana Caselotti’s voice ‘interesting’ because it felt very forced and unnatural for the role. Well here it’s the complete opposite. Kristen Bell’s voice fits perfectly with the character of Anna and makes her sound like just your ordinary teenage girl.

Moviefan12: We first see Anna as a little girl, waking up her big sister. Now I already touched on this with Elsa. So, I want go into much detail here. But we should look at “Do You Wanna Build A Snowman?” 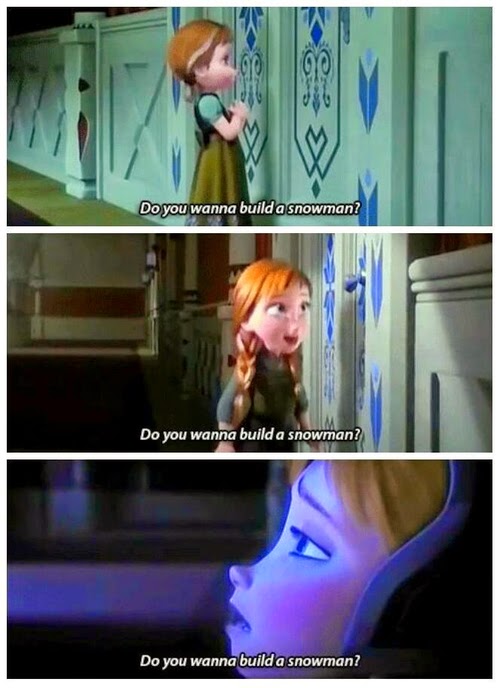 This isn’t to say Anna hasn’t had her share of despair. Just look at the final scene in this number. It’s heartbreaking. This song is important as it shows the girls drifting apart over the years and how Anna has kept the spunky spirit. We first see Anna as an adult being woken up for Coronation Day and just the way, she wakes up makes her feel like a real person. Just look at the bedhead on her. This then leads into For The First Time In Forever, where you can clearly see the difference between Anna and Elsa view life. Anna is an optimist and a dreamer that wants have a fairy tale life and happily ever after. Now if you have purchased the Deluxe Frozen soundtrack, it comes with deleted songs and there is one that was cut from an early draft that is called More Than Just The Spare. This was meant to be Anna’s introductory number and show that she felt a tinge of jealously towards her sister because as Kirsten-Anderson Lopez put it, Arendelle viewed Elsa as the heir and Anna was just a spare. I absolutely love this song and would love to hear Kristin Bell sing it. I understand ultimately why it was cut but I love this song.

Moviefan12: I find that the best way to describe Anna is that she’s bubbly, quirky, outgoing and a little clumsy. The complete opposite of her big sis. And that attitude contrasting the closed off attitude of Elsa, this says so much about who Anna is and how her parents gave more freedom whereas Elsa was closed off from society while Anna was allowed to roam and explore.

R8: If I had to choose between Anna and Elsa then Anna would win out ahead by the slightest of margins. Whilst Elsa is the character a lot of us are and feel like (since we’ve all felt lonely and depressed at some point in our lives) Anna is the character we want to be. She’s always happy, optimistic, trying to find the good in everyone and everything. She is a radiant bundle of joy that we the audience would love to be. But at the same time she’s realistic, grounded. She can be impulsive to the point of disaster (take her impromptu engagement to Hans), she often has her head up in the clouds and doesn’t pay attention to the world around her; she can sometimes be a bit too naive and trusting. But her arc in this story is to overcome these flaws, to grow as a character, whilst still holding onto what makes the character so great. She’s kind and fun loving, but at the same time, not a perfect princess with no flaws whatsoever. She is a human being, one that makes mistakes but learns from them. She is, in short, a wonderful person.

Moviefan12: My favorite moment is

“She’s My Sister, she would never me”.

I explained this in my Top 6 Anna moments but to go over again, this line resonated me with because I am a younger brother with a big sister and we have had our ups and downs but through thick and thin, we’ve always been there for one another. And this line from Anna is a reaffirmation that siblings will always care for each other and younger siblings want to view their older sibling as a heroic figure that can chase the monster out of the closet, understand things that parents don’t To quote the song, “Sisters and Brothers” from Sofia The First.

They understand you better than anyone

Siblings have a special bond that’s like a friendship but tighter than that. In many respects, your sibling is your first friend and to younger siblings, your first idol. My big sister is my Elsa and the Anna in the relationship with her. That’s why I have such a special connection to Anna because just Anna, I want to believe that my big sister will always protect me.

R8:Ooh boy is this one a tough one. Now I could go on in great length how brilliant the song ‘Do You Want To Build A Snowman Is’ in both its character development and its emotional poignancy. I could talk about her determination to go forth and save her sister even when it seems like the most crazy thing to do. I could even talk about how that despite the fact that she’s dying she just doesn’t sit around and wait for death, but instead continues to fight against it in order to save herself and her sister. But I regretted trying to play smart and not talk about my favorite scene from Snow White last time (aka the scene where she cleans the Dwarfs house because it’s the polite thing to do) by going with the most obvious choice:

Anna chooses to save her sister Elsa at the cost of her own life. And sure, we know it’s not gonna stick. Disney isn’t brave enough to kill off their lead like that. But the act of true love that really is an act of true love and not just a male-directed fantasy is the defining moment of both the character and for Disney as a whole. This is Disney’s first big step of going away from having the male character be the focus and instead give more agency to the female lead and it shows. It’s such a beautiful moment, such a powerful sacrifice, that I challenge any of you to watch it with a dry eye.

R8:Now the only appearances I know of is of course at Disney World, where Anna and Elsa get to meet and greet guests in the Norway pavilion of EPCOT. I sadly never had the time to go visit them (since it always had a huge line) but mark my words: In the not too distant future they’ll remodel the log flume ride that already exists in the Norway pavilion to be one about Frozen instead. The princesses already live there, the film is one of Disney’s finest, it’s only a matter of time before they capitalize on it some more.

Also it’s not too far-fetched to believe that maybe in the future Anna and Elsa will join the Kingdom Hearts crew. I mean they’ve done nearly every other Disney princess movie, and it was a hit in Japan so… here’s hoping.

Moviefan12: For all major Later Appearances, see Elsa. That’s pretty much all I’m going to say on that. However the Once Upon A Time Panel at this year’s Comic Con showed a clip of Anna and Elsa from the first episode of season 4. It hasn’t been released officially but images of Anna and Elsa have made the rounds and having watched the clip in question, the two ladies playing the Royal Sisters feel like Anna and Elsa.

Is Anna A Good Character?

Moviefan12: Yes, she is. Very much so. I’ll be honest and say that Anna has slowly risen to be one of my favorite Disney characters and out of all 13 princesses (Well 12 princesses and a queen) that we’ve looked at over this retrospective, Anna is the one that resonates with me the most. Siblings are nothing new in Disney films because you had Jane and Micheal , Andy and Molly, etc.., etc… but as a younger sibling, Anna to me is Disney finally understanding what it feels like to be a younger sibling. Going beyond that, she is a wonderful young lady that shows you can still have a positive outlook on life.

R8:Anna is more than just a good character: She’s a positive step in the right direction. Now some critics will argue that Frozen is sexist or racist or that it’s not deserving of all the praise. And to that I say baloney. Sure it may not be the biggest step in the right direction, but it is a step nonetheless. Anna proves that Disney can have interesting female characters that aren’t solely defined by the man in their life. That these characters can have strengths and flaws just like any other person. Anna is a good role model and a great character, setting the bar high for future princesses. At the end of the day the driving force of the story is her love for her sister; and who can argue with that?