Mercedes-Benz has been making cars since the 1886. McLaren was founded in 1989 and is responsible for rewriting the rules for making a supercar with the McLaren F1 in 1994. The two automotive companies worked together to create the Mercedes-Benz SLR McLaren, which was introduced on November 17, 2003. When this car came out, it cost $450,00. It was powered by a supercharged 5.4L V8 that produced 617 hp and 580 lb-ft of torque, with a 0-60 mph time of 3.6 seconds and a top speed of 207 mph. Production of the SLR McLaren ceased in 2007 for the coupe and 2009 for the roadster. In 2006 a new version of the SLR was released, called the Mercedes-Benz SLR McLaren 722 Edition. The 722 refers to the victory by Stirling Moss and Denis Jenkinson in a Mercedes-Benz 300 SLR with the starting number 722, referring to the 7:22 am starting time, at the 1955 Mille Miglia.

I recently saw a Mercedes-Benz SLR McLaren 722 Edition at the 2011 Houston Classy Chassis: Concours d’Elegance. There were two other variants of the SLR McLaren on exhibit at the same show. This is one of the best cars to wear the Mercedes-Benz badge. It is gorgeous. I love its styling. The side exhaust add to its incredible styling.

The Mercedes-Benz SLR McLaren 722 Edition is powered by a supercharged 5.4L V8 engine, paired with a five-speed automatic transmission, that produces 640 hp and 600 lb-ft of torque. Its 0-60 mph time is 3.6 seconds and reaches a top speed of 209 mph. Prices for the 722 Edition started at $480,000. The SLR McLaren 722 Edition is one of the most expensive cars on the road, but not many cars can match its styling and perfromance.

Final Thought: The Mercedes-Benz SLR McLaren 722 Edition is an incredible car. It is one of the fastest grand tourers on the road. Not many cars can match the style and performance of this car. The $480,000 price tag is expensive. I would take a SLR McLaren over the SLS AMG any day. 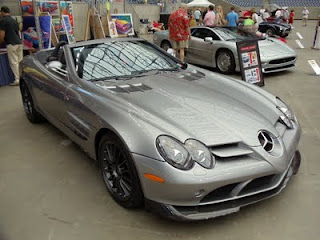