Â The Mercedes-Benz 300SL Gullwing is one of the most iconic cars in automotive history. The race version of the 300SL, which was made from 1952 to 1953, was the first car to have doors that opened upwards instead of sideways. The production version was the first street legal car to reach 155 mph, making it the fastest production car when it was produced in 1954. In 2010, Mercedes-Benz’s in house tuning company AMG was allowed to design and build its own car to succeed the SLR. What AMG created is the Mercedes-Benz SLS AMG, the spiritual successor to the 300SL Gullwing.

I first saw the SLS AMG at the 2010 Houston Classy Chassis: Concours d’Elegance. I really did not care for the car. In my mind, it did not stand out in a room with Ferraris, Lamborghinis, a Duesenberg Model J, and a Mercedes-Benz SLR McLaren 722 Edition. I saw it again walking out of Happy Hour at a hotel bar in Houston. Again, I did not care for the car. Someone brought it to the May 2011 edition of Houston Cars and Coffee. It was parked next to a Ferrari F40. There was a huge crowd around the two cars. I paid more attention to its neighbor than the SLS AMG. To be honest, I do not like the SLS AMG. I am not a big fan of AMG. I would take a 300SL Gullwing or the SLR McLaren over the SLS AMG.

The SLS AMG is powered by 6.2L V8 engine paired with a seven-speed dual-clutch semi-automatic transmission. The engine produced 563 hp and 480 lb-ft of torque. It goes from 0 to 60 mph in 3.7 seconds and is electronically limited to 197 mph. Its predecessor, the SLR McLaren, went from 0 to 60 in 3.2 seconds and tops out at 207 mph. The SLR is quicker and faster than the SLS. Normally, a car should outperform isÂ predecessor. In Mercedes case, the SLR outperforms the SLS. The SLS starts at prices just under $200,000, which is cheaper than the SLR starting price of $450,000.

The SLS AMG was featured on www.jaylenosgarage.com. Jeremy Clarkson of Top Gear drove one up the East Coast of the United States during the 2010 US Road Trip Special. Adam Ferrera of Top Gear USA reviewed on during Episode 4. The American Stig drove it around the test track in 1:27.6, the sixth fastest time around the Top Gear USA test track. The SLS AMG is drivable in Grand Turismo 5, Need For Speed: Hot Pursuit, Shift 2: Unleashed, Forza Motorsport 3, and Test Drive Unlimited 2. 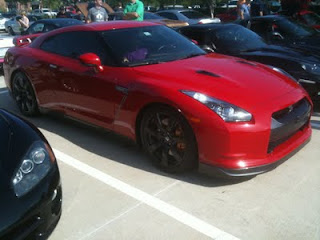