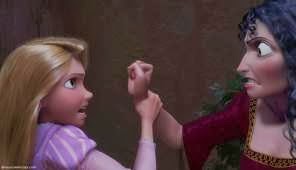 The trope of evil stepmothers is nothing new in film especially Disney films as they date as far back as Lady Tremaine from Cinderella (1950) or the Wicked Queen from Snow White and the Seven Dwarfs (1937). Disneyâ€™s fiftieth animated feature, Tangled (2010) actually takes the relationship another step further and actually explores the abusive nature between stepparent and child. As it shows how verbal abuse can affect someoneâ€™s self-confidence and make them feel worthless. At the same time, this film also explores how this type of relationship can affect the child in the relationship.

As stated prior, Mother Gothel as a character is nothing new to Disney films because as stated, evil stepparents have one of many stamps of Disney films for quite some time. Gothel though seems share personality traits with Frollo (Tony Jay) from The Hunchback of Notre Dame (1996). The reason for this comparison between these two comes from the fact that they use words to belittle the children under their care. The way they use their words to demean the people under their care is quite cruel. A great example would be to take a look at Frolloâ€™s lines from the song, Out There â€œYou are deformedâ€¦ And you are uglyâ€. (Jay, Out There) These lyrics shows how Frollo talked down to Quasimodo making him feel as though he is a lesser being. Something that is seen with many of the evil stepparents in film such as Mother Gothel talks down to Rapunzel. â€œLook in that mirror. I see a strong, confident, beautiful young lady. Oh look, you’re here tooâ€ (Murphy). This line here shows how Gothel plays with Rapunzelâ€™s emotions. Because Rapunzel was led to believe that her mother was saying something kind about her but in reality, it was just another jab at her. Mother Gothel is keen on playing mind games to mess with her and she has to rely on these as she is just an average woman relying on magic. As stated in an interview with Cinema Blend. Com, Mother Gothelâ€™s voice actress, Donna Murphy, mentioned this. â€œAll she has is her smarts and commitment to this desire to not only stay young and beautiful but stay aliveâ€. (Eisenberg) What Donna Murphy is getting at here is showing that Mother Gothel had to find another way to torture and bring down Rapunzel. And words are sometimes the best tool; she has to bring down the protagonist.
There is no denying that the relationship between Mother Gothel and Rapunzel is an abusive relationship. This is seen mostly in how Gothel talks to Rapunzel as she always talking down to her. Even when Rapunzel tries to stand up her, Mother Gothel still talks down to her. Rapunzel in the beginning of the film is almost scared to stand up for herself because Gothel wonâ€™t let her. This is a big theme throughout the film as she progresses. At one point, in the film Rapunzel did try to stand up for herself but Gothel talks down to her as witnessed in the song, Mother Knows Best (Reprise) â€œRapunzel knows best Rapunzel’s so mature now. Such a clever grown-up miss. Rapunzel knows best. Fine, if you’re so sure now. Go ahead, then give him thisâ€. (D. Murphy, Mother Knows Best (Reprise)) These lyrics show Mother Gothel berating Rapunzel in a condescending manner. Going off this it is interesting to point out that in an article about overcoming an abusive mother/daughter relationship, the first thing it says is â€œRecognize that your motherâ€™s behavior is not about youâ€ (MichelleE). With the relationship between Mother Gothel and Rapunzel, this is shown to be proven otherwise. Mother Gothelâ€™s abusiveness towards Rapunzel comes from the fact that she is using her hair for her own benefit. She kidnapped Rapunzel as a baby in order to remain youthful. As stated in the same interview Donna Murphy gave with Cinema Blend.com â€œItâ€™s not like sheâ€™s 60 and wants to look 40 or 35. Sheâ€™s 387 and wants to look like sheâ€™s 35!â€ (Eisenberg). Mother Gothelâ€™s entire relationship with Rapunzel is built around a lie that she has been feeding to her daughter for eighteen years. For eighteen years, Mother Gothel kept Rapunzel locked up in a tower for her entire life. Limiting her interaction with other people to just Gothel. As stated Gothelâ€™s main intent with Rapunzel was use the ability of her hair in order to remain youthful. Because Mother Gothel by all accounts, Mother Gothel should be dead. The relationship between Rapunzel and Mother Gothel is all built on a lie. As stated in an interview with MTV.com, Rapunzelâ€™s voice actress, Mandy Moore:

â€œShe has an overprotective mother who tells her sheâ€™s not missing out on anything, and itâ€™s a big bad world out there and itâ€™s too scary and dangerous and sheâ€™ll be eaten alive, literally, if she decides to venture out into the worldâ€. (Warner).

Moore here is referring to how Mother Gothel has been manipulating Rapunzel her entire life. By feeding her these lies and purposefully scaring her. With Gothel tainting Rapunzelâ€™s mind with these fears, she had been commanding a false sense of love and respect from her daughter. This is an important part of Rapunzelâ€™s development as a character as in the beginning, she is under the complete control of Gothel. It isnâ€™t until Rapunzel puts on the tiara from earlier in the film and it flashes back to her as a baby and she has this revelation:

â€œI am the lost princess, aren’t I?… Did I mumble, Mother? Or should I even call you that? â€¦ It was you! It was all you!… I’ve spent my entire life hiding from people who would use me for my powers?.. I should have been hiding… from YOU!â€ (Moore)

With this Moore is suggesting that Rapunzel knew that something was off about her life but could never place her finger on it until she finally stood up to Mother Gothel.
That particular moment gave Rapunzel the courage, most people wouldnâ€™t have to stand up to their abuser and tell them that they arenâ€™t taking their abuse any longer. Something a lot of people in these types of relationships are too scared to do.