*In an undisclosed location somewhere in the depths of silicon valley, Darkfan21 and Fusionater are busy building a device that will allow them to take over the world, thus they have no time to write a blog right now*

Darkfan21: You have commercials in your blogs now?

Fusionater: Yeah, all the big shots are doing it.

Darkfan21: Seems odd but whatever! By the way, this inator is coming along nicely but you’ve yet to tell me what it does and I must say your evil wardrobe is a nice touch with all of the black and red but don’t you think the platform shoes are a bit of overkill?

Fusionater: Meh, I found these in the closet and I thought they wold work well, least I’m not sporting the evil mustache.

Fusionater: Moving on! Ok, it’s gonna take about 12 hours for the device to charge to full power, what should we do in the mean time?

Darkfan21: Well, we could always trash something. Weren’t you going to review that horrid Phineas and Ferb movie?

Fusionater: Yeah, I was, but how to bash it? Hm… I think I know how to start this thing off!

Welcome to Evil Internet reviews everybody! Ive got the brilliant Darkfan21 with me to review this horrid Phineas and ferb film with me!!!

Darkfan21: Didn’t you praise Phineas and Ferb in your last 2 lists with Jason and Lindgren?

I’m introducing a brand new category! This is for when animation presents us with such a horrible mistake that it absolutely has to be addressed! Maybe someone’s eye will disappear! Or perhaps there hair will breifly become detached from their head! It’s these moments that make this category possible. I bet your gonna love talking about the failure of others Darkfan!

Darkfan21: Indeed there is only one other film that I can think of that would fit into this category of Animation Fail. Matter of Fact, didn’t your old freind, Moviefan12 dedicate an entire week to that putird film? If you haven’t figured it out by now, I’m of course talking about the heinous Dumbo!

Darkfan21: Where Shall we start? Why not with the characters?

Fusionater: I know where to start! With the most glaring and obvious animation flaw in the entire film!

All right, it’s bad-ass enough…whats the problem you may ask?

This is an image of him later in the film.

Um…what happened to his robot hand? All right, no big deal I suppose, it’s not like they screwed up again… 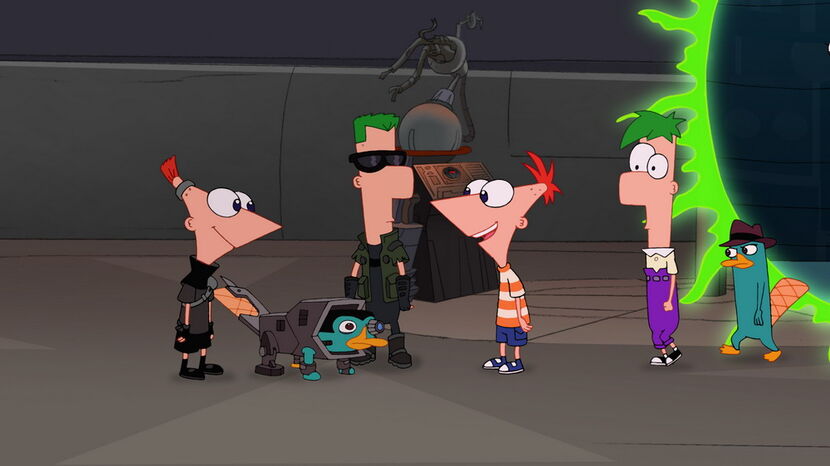 Really? His arms not robotic now? were the animators even paying attention to the character designs? I mean seriously, you think they would have put more effort into what would have been their first film, your thoughts Darkfan?

Darkfan21: Cyborg animals, take note of this because it could help us in taking over the world. Anyways, I’m not sure I’d call this the worst part. I mean the design is rather sleek but it could more meancing with perhaps two flames on the sides.

Not really that important, but the alternate dimension version of Phineas and Ferb are supposed to have greyer skin do to less exposure to sunlight.

Ok, so this boy can just do whatever he wants and always gets away with it? Ah, a villains dream! But this is a goody two shoed know nothing with little regard for the actual intelligence it would take to perform the feats he accomplishes!!! 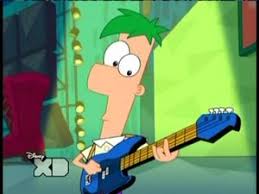 WHY WON”T YOU SPEAK!!! I CAN’T MAKE FUN OF YOU IF YOU DON’T GET A FEW LINES IN OCCASIONALLY!!!

Ah, now there’s a character, someone villainous, someone decietful, someone full of hatred!!! You just got to love the evil in her. But seriously, her middle name is Gertrude? HAH! Pathetic! 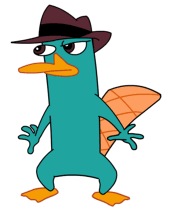 WHY WON’T THESE CHARACTERS SPEAK!!! I MEAN, I know it could be said that you can get a lot across with body language, but thats bull! You need to speak!!! 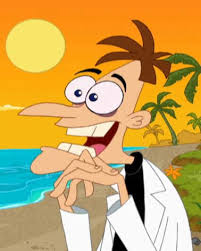 Oh I see!!! They were so unoriginal that they couldn’t even come up with new characters for their first film!!! Thats why they pulled all this alternate dimension bull shit!!!

Darkfan21: I think you explained these characters well but I must ask you if hate Phineas so much, why is he your avatar on the internet? Hmm. As for Doof, I agree that he is a complete and utter moron and a disgrace to evil. He couldn’t even take me down in a fight because he is so stupid.

Fusionater: I um…I’m masquerading as a good guy! Yeah that’s it!

Anyway…um..you ready to do the music?

Darkfan21: Of course, let me just grab my headphones.

Fusionater: This song is just…creepy, I’m mean seriously, they couldn’t come up with something better than P and F running around in those weird outfits? Come on!!!

Fusionater: This song is so egotistical! And I love it!!! Hey Darkfan, you think we could get our own ego based themes?

Darkfan21: I don’t think we need one because songs are a waste of time.

Fusionater: How could the slightly more respectable, alternate doof, team up with this guy!? It’s just unthinkable! You have a total moron(looks at Darkfan), and a disturbingly brilliant evil mastermind(smirks).

Darkfan21: I see what you did there and remeber who is in charge in here. WHO invited you to join? ME! You may call me a moron but I’ll soon prove you and the rest of the world wrong.

Fusionater: …I totally didn’t put this number 1 on a list with jason and lindgren…and I’m also totally ot going to put a link to that at the end of this…um…it sucks…I guess…*shivers*

Darkfan21: Speaking of which, weren’t you supposed to throw Jason into the the dungeons? What happened to that? Let me guess, Lindgren saved him. You fool, how could you let this happen.

Darkfan21: Sad & Depressing, now this is how the film should have ended. It’s not natural for a boy to have a pet platypus.

Fusionater: meh…this song is so bland that I can’t even really critique it…all I can do is reference our evil plan pointlessly. Soon all that oppose us will be in a brand new reality!!!

Darkfan21: Agreed, I shall rule the world.

Fusionater: This song is all right…it has giant robot battles…kamikaze bots…and a good sound to it, you sure you don’t want to listen to it Darkfan?

Darkfan21: I may give it one listen but I fear that it may drain my engery if I remove my headphones for longer than 3 minutes. So, I’ll only listen to it for a second.

Darkfan21: In that case, then I will not listen to it because it may harm me.

Kick It Up A Notch

Fusionater: Ok darkfan, whats the final verdict for this movie!?

Darkfan21: While it has elements that would wor, it’s not bad. Ha Ha, I’m sorry! I can’t say that with a straight face. This film sucks as does this show as this channel as do these characters. Everything about this film is Stupid!

Ooh, it looks like my inator is ready, lets go check it out.

*walks over to the device, dramatic drum music played*

Fusionater: Behold!!! The enslavinator!!! When I activate this device, a sygnal will be broadcasted to every satelite surrounding the planet(this includes the moon), and they will in turn bounce the signal back to earth repeatedly, untl every Human mind is ours!!! *Proceeds to push the button*, hm, do you want to do the honors?

Darkfan21: Of course!!! *Pushes Fusionater out of the way, and pushes the button*

Darkfan21: Well that was a bit anti-climactic…

Fusionater: It’s not designed to cause earthquakes, right now, the signal is being broadcasted…

As an added feature, all our minions within a hundred mile radias are now coming to the base.

Fusionater: We should go outside and wait for them!

*they walk outside and wait*

*On the horizon, people start appearing*

Darkfan21: This is turning out better than I ever could have imagined!

Darkfan21: *turns around to see a gigantic crowd of people staring at him*

Fusionater: *speaking into a microphone*, Minions of the Enslavinator, this is Darkfan21, he has taken your minds from you, and expects you to do his bidding, I suggest you take care of him.

and all the rest of the bloggers he has terrorized.

Moviefan12: You’ve gone too far this time, Darkfan. You can attack me but when you go after my friends, that’s when it gets real. I knew I wouldn’t be able to beat you like last time.

Darkfan21: How did you know?

Moviefan12: Fusionater told me, what was about to happen and how he joined to take you down from the inside. Now let’s finish the job.

Moviefan12: It’s a bit unethical to bring the entire human population to it’s knees to stop one guy, but I guess Fusionater thought it was worth it.

*A charge of epic proportions heads straight towards Darkfan21*

Darkfan21: Fine, fine, I’ll leave but I’ll be back one day. I swear it, but I am done with you Moviefan but as for you, Fuionater, I’ll get my revenge on you one day.

Fusionater: Yeah yeah, so are you gonna run, or just stand there and die?

Moviefan12: Good! (to Fusionater), that guy is such a joke. You handled him well.

Fusionater: So…I have the coordinates of his other bases if your interested, also…I think we should send all these people home before we deactivate my device…*Looks at the Large crowd*

Want to know how exactly all this happened? Well too bad!!! Hah I’m just kidding, here you go.