YAY!!! Another list in the backlog!!! And I didn’t rip off Moviefan12 this time!!! Guess my number 1. I’m sure you people who have known me for quite a while now couldn’t POSSIBLY get it…

Now before I begin lets get 1 thing straight, if I were to include comic book villains on this list, it would fill the whole thing. That would make my list lack diversity, and I find that boring, so uh…top 9.

Dwayne from 30 minutes or less.

Now I know you weren’t expecting a dumbass villain from a typical comedy movie(I still loved it), but there was 1 part in this movie that forever cemented him on this list. near the end of the film, when his partner/friend who he has been bullying throughout the entire film gets set on fire due to the flamethrower on his back being shot, instead of going after the guy with $100,000(which I guarantee every single person in the theater was expecting), he went back to check on his friend to make sure he was all right. And after that scene, you could tell this had just become personal for him. He may be a dumbass, but he’s a memorable dumbass.

Uh…the green guy in the middle.

Plankton is a diminutive evil genius that wants nothing more than 1 little recipe, and he will go to extreme ends to get it. one of the things I love about this guy is his interactions with the other main characters, mainly his W.I.F.E. and Mr. Krabs. nothing is quite as funny as watching this guy blow a gasket.

Number 7. Syndrome from the incredibles. 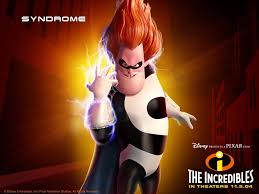 This guy is really similar to the Horror villain scream, in that he’s aware of all the cliches, not to say he doesn’t take part in them. What I really loved about the villain was his evil plan, he wanted to get rid of supers, and not by killing them(though he did a significant amount of that to), but by making everyone else just like them, now that’s just sinister. He could have been a hero if his dreams weren’t shot down by Mr. incredible. 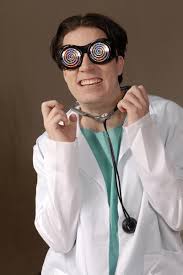 I really just had to include him sorry, so um hes insane, moving on. 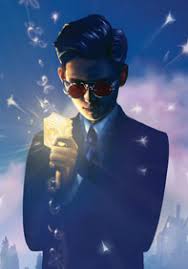 Anyone else think he looks bored?(my joke doesn’t work here as it’s a different picture than before)

What you thought this was just film and television villains? NO! while Artemis is the main character of the series, in the first book he was a real villain, spending the entire book trying to relieve the Fairies of there gold. This Fourteen year old boy is a strategist unlike any other, and he deserves his spot. The series is really worth a read for those who haven’t already read it.

Number 4. Jigsaw from the Saw series. 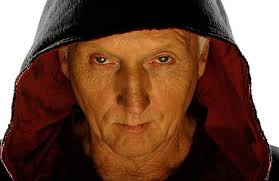 1,2 Jigsaws coming for you.

Jigsaw has a rare quality that you don’t often see in a horror villain, alongside Mr. Lector himself, hes actually intelligent! Unlike Hannibal however, Jigsaw took a different approach to psycho analyzing his victims. The traps this guy comes up with are just as compelling as he is. Saw was my gateway drug to Horror movies and for anyone who hasn’t seen it. watch it!

What do you think?

I think it’s just sad that the one time one of this guys plans actually works is when he’s saving the world, something other villains ridicule him for. I love that this guy is just so stupid. give him 2 and 2 and he’ll get 20. I’l bet it’s pretty embarrassing to constantly be defeated by a teenage cheerleader. The running gags with this character rarely get old and when they do they are immediately made fresh with some new twist. 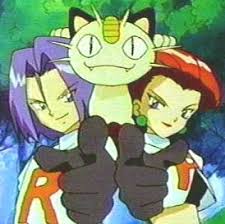 Now like Plankton, these are characters I constantly find myself feeling sorry for, constantly trying to do one thing, succeed. There attempts to capture a simple Pikachu number in the 100’s. Whats really sad about these guys is that it’s clearly shown that they would succeed if they simply quit being criminals. One question I always ask myself is, “why don’t they just capture a few wild Pokemon?” Seriously by now I think the smart move is to get several thousand miles away from Ash and try something else. 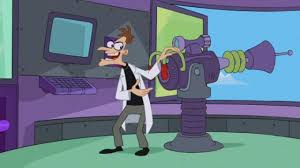 HD, um, not the Lazar thingy.

OK Lied, had I included Comic book villains, I still probably would have put this guy at number 1. He’s so awesome that Ive committed myself to using him as a base source for satirical jokes should I ever decide to do a video review show(which I have considered). Now the great thing about this guy is his relationship with his “nemesis” Perry the Platypus, they fight so often that HD literally gave him the key to his front door to save on ceiling repairs. They spend so much time together that they exchange Christmas presents. And when he doesn’t have Perry as his nemesis, it’s just sad. Voiced by one of the creators Dan Povenmire, Doofenshmirtz really has a unique voice, giving a nice quirky evil scientist vibe.

Ah the heck with it, I do’t care if this is a backlog, I’m adding more to my number one!!!

There is no question that I love this villain, He only makes my favorite show all the better, I especially like the design for him, Its just so, not normal.

If I left someone out that you think should have made the list, please let me know in the comments.