After the international phenomenon that wasÂ Snow White and the Seven DwarfsÂ the then up and coming animation studio was already working on their second feature film.Â Â With the world completely taken withÂ Snow WhiteÂ Walt knew that the next film had to be bigger and better in every possible way! This is apparent while watching the film.Â PinocchioÂ has a much more involved story with a huge scope and an extreme attention to detail and commitment to excellence. Itâ€™s for these reasons and more that animation scholars and critics call Pinocchio out as the most technically perfect animated film ever created. Without further delay letâ€™s take a look at the film that taught the world how to believe in dreams and to wish upon a star. 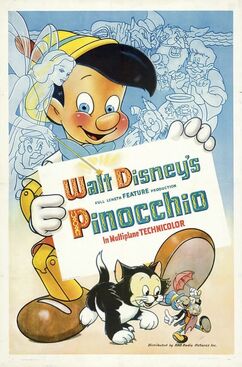 The story of Pinocchio is the story about how a humble carpenter named Gepetto who wishes to have a son. A being known as the Blue Fairy makes a newly made marionette named Pinocchio come to life. But Pinocchio isnâ€™t human and in order to become human he must earn it by being truthful, brave and unselfish. Our host Jiminy Cricket is picked to be Pinocchioâ€™s conscience since Pinocchio is not yet human and doesnâ€™t possess one. Pinocchio then gets pulled in multiple unfavorable directions by unsavory characters and experiences the darker side of humanity which makes him appreciate the things that make humanity great. With this knowledge in tow Pinocchio puts them into practice when saving Gepetto from the whale Monstro and earns his humanity creating a warm atmosphere and a conclusion that is one of the most emotionally satisfying experiences Iâ€™ve ever seen in any film.

Many people have criticized this film for being too dark or scary, even disturbing, the Donkey Transformation scene being a good example, but I believe that not only are these criticisms completely unfounded (exceptions being childhood trauma), but were completely necessary to the telling of the story. In order for Pinocchio to become human he must understand all facets of humanity even the dark aspects. With this knowledge and experience he can appreciate the unconditional love that Gepetto has for him and the comfortable life that Gepetto has given him.

Other standout aspects of the story are the themes. The theme of what it means to be a good person and that dreams do come true are beautifully portrayed throughout the film and has become the core of the Disney ideals and has set a thematic standard for all Disney related media to follow. I do believe that this theme is beyond reproach. Perhaps itâ€™s for this reason that I didnâ€™t go gaga overÂ Princess and the FrogÂ as much as other people did because in a way that film sides with modern day cynics in criticizing the â€œwish upon a starâ€ philosophy in favor of a more modern work hard philosophy that after awhile does tend to get preachy. My problem isnâ€™t with the mentioning of the hard work philosophy because it is a good theme, but itâ€™s the fact the film completely doesnâ€™t get the metaphor that was established byÂ PinocchioÂ and all the other animated films, the hard work is all symbolized in the conflicts, journey and struggles the characters go through in order for their dreams to come true both mentally and physically. The wishing star represents the human optimism and will to achieve a goal through good deeds, morals and attitudes. The fact thatÂ Princess and the FrogÂ fails to understand this is my main problem with the film and it fails to thematically and emotionally connect to the foundation of what Disney is.The reason why I brought this up is becauseÂ PinocchioÂ is where this theme is pushed into the spotlight and is the blueprint for all things Disney.

A naÃ¯ve wooden boy who was brought to life by the Blue Fairy. Pinocchioâ€™s goal is to prove himself brave, truthful, and unselfish and he will become a real boy. He is a pure innocent boy that has no concept of right and wrong which is the main reason why he is so easily manipulated. Many people criticize this character for being too easily deceived and stupid for his actions in the film and doesnâ€™t deserve his humanity. I respectfully disagree!!!!!!!!!!!! The reason why Pinocchio is so easily deceived is because he doesnâ€™t understand the concept of evil or the fact that other people would want to use and hurt him. We know better because we were raised from infancy by our parents not to talk to strangers and they instilled in us a sense of right and wrong. Pinocchio doesnâ€™t have that luxury and has been thrust into the life of a 7-8 year old without the normal development of other children add on top of that the fact heâ€™s not human and doesnâ€™t have that conscience to tell him right and wrong. That is until Jiminy Cricket becomes his conscience. This makes Pinocchioâ€™s struggle even more difficult. Through his experiences with the darker side of humanity he appreciates the true gift that the Blue Fairy and Gepetto have given him in the sense of a warm and caring home and sets out to rescue Gepetto from Monstro without hesitation and risks his life to save his father even when Gepetto pleads with Pinocchio to abandon him.

Our narrator and main supporting character of the film. A kind, caring and slightly sarcastic cricket who has sound moral judgment and is an excellent judge of character. He was in a way selected by the Blue Fairy to be Pinocchioâ€™s conscience. It certainly wasnâ€™t an easy job because Pinocchio being the naÃ¯ve boy that he is constantly doesnâ€™t listen to him until the 3rdÂ act of the film. That is something we all did when we were children. We didnâ€™t really listen to our conscience when we were little so why would Pinocchio especially with Jiminy being an external conscience? Jiminy is also symbolic of no matter how much we try to bury our conscience and ignore it, it will always be there. Jiminy sticks with Pinocchio even after he keeps abandoning the poor cricket. Jiminy sticks with him and itâ€™s a test for Jiminy as much as it is for Pinocchio and his persistence to the inner morality in all humans is what makes Jiminy a fine conscience.

The humble carpenter who makes all sorts of contraptions from clocks to puppets. He is a man that has dedicated his life to providing happiness to others and rarely does anything for himself and is one of the kindest souls in the town. That is why the Blue Fairy decides that his prayer for a son be answered.

These are the nasty antagonists that manipulate Pinocchio at various points in the film. The interesting thing about these villains is that they arenâ€™t villains with magical powers nor are they jealous stepmothers, theyâ€™re thugs doing what thugs do. There are people like in the real world. Itâ€™s an exaggeration sure, but they werenâ€™t too far off from the cruelty that plagues the streets of even the finest towns and cities. Very effective and real villains.

The ginormous whale that swallowed Gepetto and eventually Pinocchio. He is extremely powerful and is a force to be reckoned with. He is extremely irritable and his size was an excellent way to show just how much bigger the scope was compared toÂ Snow White.Here’s a video from the Final Mix version of Kingdom Hearts Birth By Sleep where Monstro was added as a boss fight in the Mirage Arena where brave warriors can challenge holograms to prove their strength.

The music of this film is legendary! At least one of the songs has made it into the mainstream culture and that is obviously â€œWhen You Wish Upon A Starâ€.Â Â Here are the tunes ofÂ PinocchioÂ by Ned Washington, Leigh Harlene .

When You Wish Upon a Star

Here it is. The classic. The anthem of Disney, My third favorite Disney song and the opening song to the film. It sets up the mood and themes very well and it keeps that timeless storybook feel to it.

This is a sweet little song that Gepetto sings while moving Pinocchio around for the first time. The song shows just how pure of heart Gepetto is and his reasons for making Pinocchio in the first place. The reason is â€œto bring a little joy to every heart.â€ These selfless intentions are what makes him worthy of the Blue Fairyâ€™s assistance.

Give a Little Whistle

This is a song that establishes Pinocchio and Jiminyâ€™s relationship and that if Pinoke ever needs Jiminyâ€™s help all he has to do is whistle. It also encourages Pinocchio to seek guidance from his conscience.

This is a really fun song that shows the cunning of Honest John luring Pinocchio away with empty promises of fame and fortune when in all reality the wooden boy is merely a tool for Honest John to make a quick buck.

I’ve Got No Strings

This song is used to show Pinocchio performing for Stromboli and being a success which only makes Pinocchio feel like heâ€™s made the right decision when in reality the true more sinister nature of show business with Stromboli is revealed.

When You Wish Upon a Star Reprise

The reprise of the theme song is arguably one of the most satisfying moments in the entire film because it makes you feel like youâ€™ve come full circle and ends with an iconic image of the wishing star an image that shows what the film is all about.

The art direction in this film is fantastic!! The designs of various objects and the architecture make you feel like youâ€™re in a storybook and the level of detail that is given especially in Gepettoâ€™s house is truly a sight to behold. The animation of characters is extremely expressive and fluid. To think that two years separate this film andÂ Snow White. Lightyears separate the quality of animation between those two films withÂ PinocchioÂ clearly being the superior film.

I love this film!!! This is my favorite Walt movie next to Mary Poppins. Itâ€™s such a heartwarming story with likeable characters and meaningful themes and a song that would soon be the theme of all Disney movies. Absolute perfection and brilliance!!!!!!!

VERDICT: 5 wishing stars out of 5

Join me next time where I look at a very underrated video game released from Disneyâ€™s finest collaborator Square Enix, the great FINAL FANTASY XIII!!!!!!!!!!